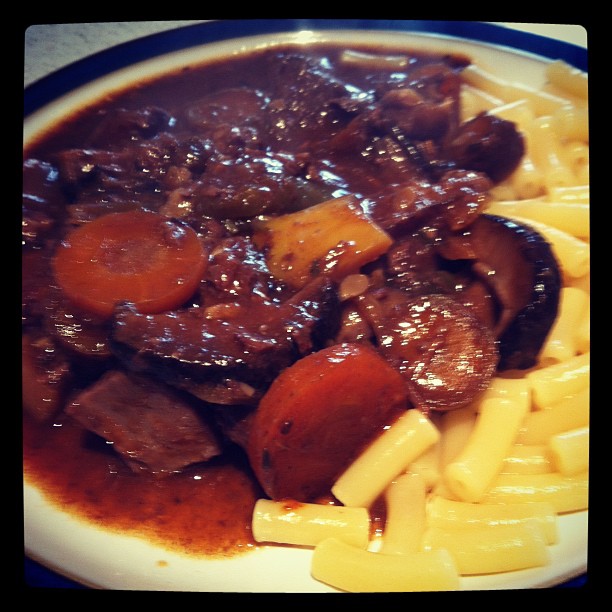 This weekend Mummy served this slow-cooked smoky beef casserole instead of roast dinner. I was inclined to kick-off, because Sunday roast is my favourite meal of the week. But I found myself sneaking into the utility room to check on the slow-cooker, because the smells wafting out were just so tempting. Once again, Mummy cooked for about 10 minutes and then produced this rich, smoky-scented dinner about 8 hours later!

Put the slow-cooker on high to warm up. Cover the porcini mushrooms in about 200 ml of boiling water and leave to soak for 20 minutes.

Mix together the flour and paprika, then toss the beef in it to coat. Spray a large frying pan with low calorie spray, and brown the meat in batches, removing each batch to a plate. Do not overfill the pan or the meat will steam, and you want a nice brown crust on each piece.

After about an hour, the casserole should be bubbling. Turn it down to low, and leave for up to 10 hours, but it should be ready after 6 hours if you need it. If the casserole seems too watery, simply transfer to a large pan and bubble on the hob until the sauce is reduced and thickened.

We served this with Tilda steamed brown basmati rice, half a pack per person, for an extra 5 ProPoints. The leftovers were even better a couple of days later, with a jacket potato.

What about breakfast on a diet?

It can be hard to find something that feels like a treat for breakfast when you’re following any kind of eating plan. I like these Slimming World Cinnamon Waffles for a weekend splurge without the calories.