I am MAD, bad, and dangerous to know… and where that dress came from!

Ahem. Let’s just get this straight. This is Mummy we’re talking about now, not me. I am, of course, sensible, angelic, and very safe to know indeed. It’s Mummy you want to avoid; especially when she’s been on the popping wine… 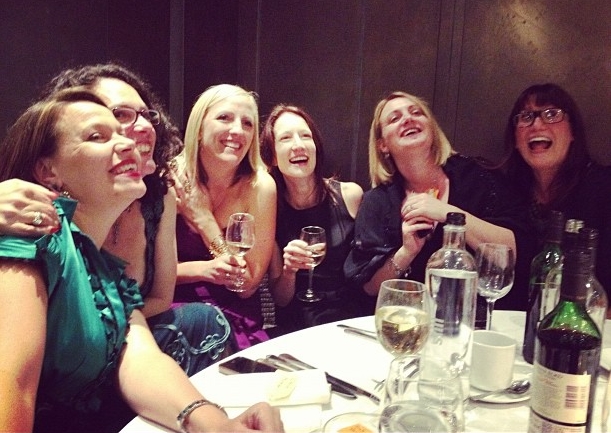 Image courtesy of Mummy Daddy Me

If your contact details are in Mummy’s email account you may remember having seen a missive from her sometime around March, asking you to vote for her in the MAD Blog Awards. Probably a bit bemused, some of you did. Others pointed out that she may have upset a vast number of her contacts by failing to blind copy, and thereby revealing the email addresses of around 700 people to each other. See? Mad, bad and dangerous to know…

Anyhow, she’s all like, ecstatic to be a finalist, whoops and dances 🙄 and then we never heard the end of it. What will I wear? Can I lose weight? Must get my hair done. Where’s my fake tan? On and on, you’d think she was Cameron Diaz. 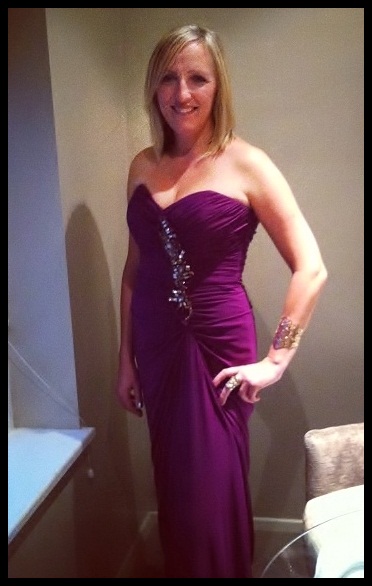 I’ve mentioned in my own post about the MAD’s the fact that Mummies morph into these weird creatures who shriek, cackle, say square-words, and wear hideous underwear when they get together. My idea of a cool party involves a good film, pic-n-mix, and pyjamas, but with the help of Mammasaurus and Cambridge Mummy, Mummy underwent a torturous mechanical procedure, which resembled the glass pipe incident that befell Augustus Gloop.

It seemed to do the trick, and the zip on her dress went up smoothly enough; on went the four inch heels, hair was smoothed and glossed by Regis Salons, and Prosecco was popped. All this was happening in front of the hotel TV screen, on which I was trying to watch Puss in Boots. I may have sighed and rolled my eyes  a few times.

Having spent the previous few days panicking and crash-dieting, Mummy declared her dress not fit for purpose, and spent hours trawling her favourite sites for a replacement. Poised over the keyboard, wondering whether £240 was really justifiable for a size 14 dress, when she is halfway through a WeightWatchers journey that will see her return to her normal size 12, she made one last Google search.

Lucky that she did, because she stumbled across Wish Want Wear, a website offering designer dresses for hire. By now it was Wednesday evening, with the awards ceremony taking place only 2 days later. Gorgeous as these dresses were, how was she going to try them on and pick one in time? She needn’t have worried. One phone call to the very helpful staff told her which dresses were available in her size, and even which were most likely to suit her shape. Fifteen minutes later, she put down the phone, secure in the knowledge that 3 beautiful dresses would arrive Friday morning for her to try. These were her choices:

Now aren’t those stunning? Mummy chose her dress, and the rest is history. Except to say that instead of spending £240 on a dress she would never wear again (assuming WeightWatchers does it’s trick!) it cost her £70 to wear a designer dress which she would never in a million years be able to afford to buy. Dress hire begins at Wish Want Wear at around £30 for 4 nights, and there is every kind of dress you could want, including Bump Friendly, and  Prom Dresses for your exacting teenager! Mummy was so spoilt for choice that she’s scouting around for another black tie event – anyone?? 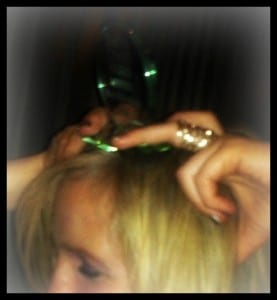 Many, many things happened that evening, including Mummy winning the Best MAD Schooldays Blog award, and for some reason popping it on her head. Possibly the proximity of the gorgeous Myleene Klass, who was presenting the award on behalf of Startrite Shoes, sent Mummy a bit loopy. Maybe it was the encouragement of Emma from Science Sparks to drink yet more wine. Or perhaps it was her frantic but unfulfilled desire to meet in person all the bloggers who she twitters and does facebook-offs with. Certainly she still hasn’t managed to pin Grenglish down to a sausage-eating date. And I have forbidden her from ever again speaking to one friend who, on hearing that Mummy was losing circulation from the waist down, advised her to remove her Spanx. I cannot encourage  bad influences…

I will leave you with a competition of sorts. An assortment of photos from the night; if you can figure out the other events of Mummy’s evening from these images, I promise to keep her from bothering you ever again… 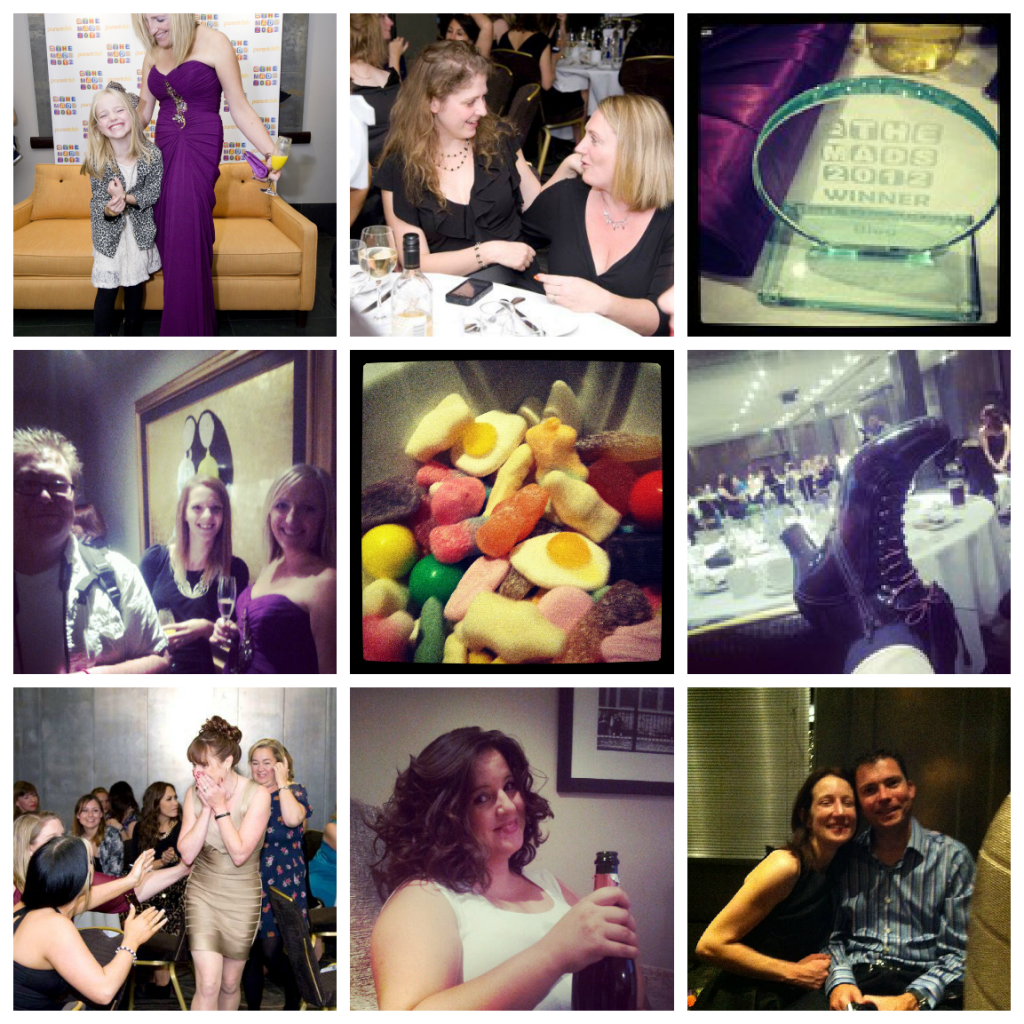 If you get stuck here are 9 clues to go with the 9 pictures:

And for a bonus point (for which you will receive complimentary blocking of Mummy from all your social media accounts), can you tell me what on earth Myleene Klass was saying here? 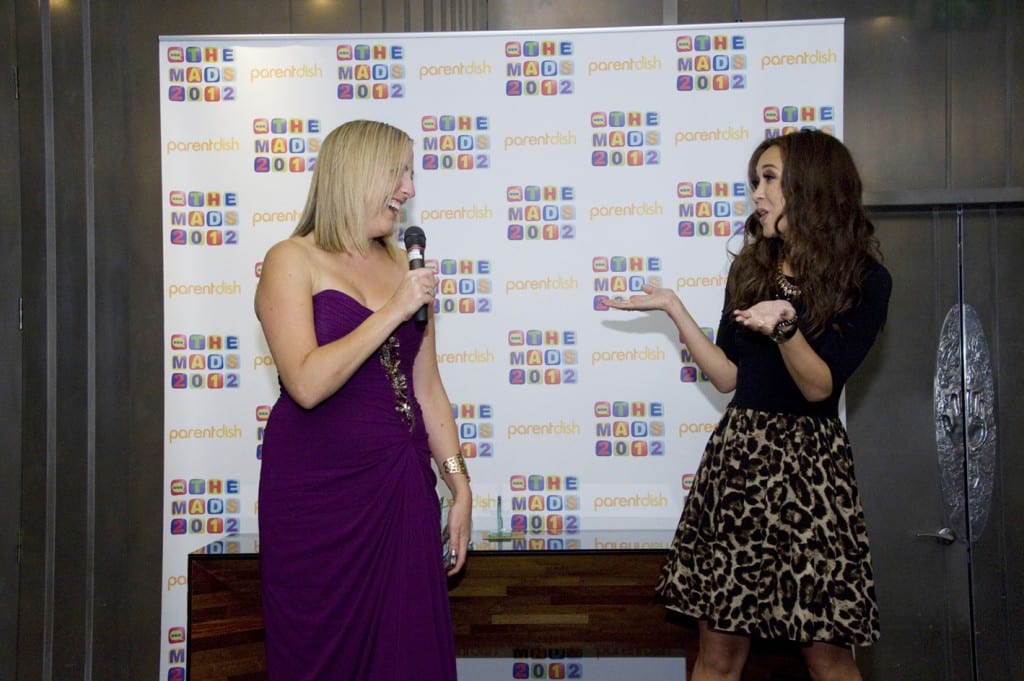