Shrek the Musical: best pantomime ever!

Me and the Bug have been begging to see Shrek the Musical ever since it was first advertised. The prices of West End Theatre tickets being what they are, M&D restrict us to one show per year, and I had asked this year for Matilda (which, OMG, you have to go and see). So we thought Shrek was firmly off the menu, until we were asked to go and review it!

Based on the story of Shrek, but with plenty of small detours by way of a good song or a child actor, the show is full of glitter, fun and farting. Yes farting – it took a good old pantomime fart-off the get M&D out of their straight-laced demeanour! Dean Chisnall played a spotless Shrek, and Neil McDermott (of Eastenders) was the hilariously precocious Lord Farquaad. Basking in his role as comedian, we feared for his knees as he shuffled them around the stage, attached to a pair of fake legs! 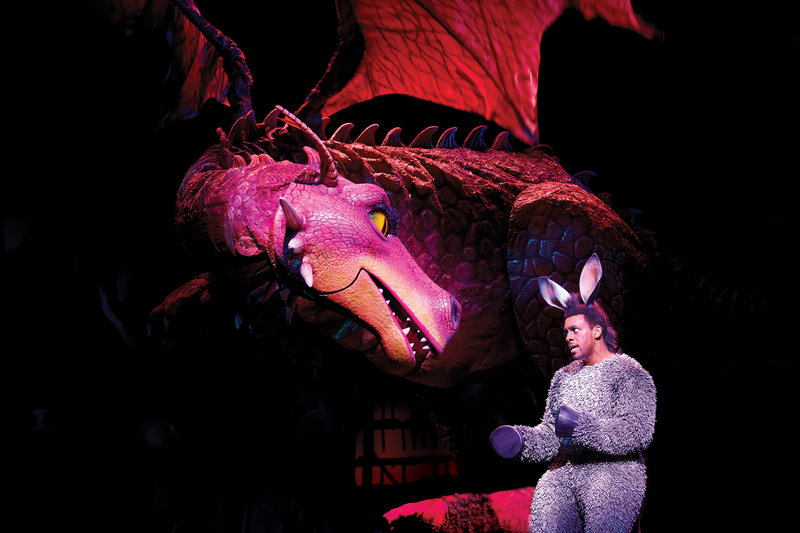 Without a doubt the star of the show was the incredible puppetry of the Dragon, through which the incredible voice of Landi Oshinowo shone. This spectacular creature was manoeuvred through the audience and around the stage with amazing precision and was truly the best part of the production.

The audience began to smirk pretty much immediately the show began. As the humour got dirtier, the more they giggled. Regular guffaws from the row behind were interspersed with family anecdotes and claims of “I so would!” Now Daddy is not one for audience participation, and has been known to cause quite feisty arguments in cinemas at the mere rustle of a sweet wrapper, so Mummy’s alarm sensors were set to high. As Farquaad’s humour became ever more eyebrow-raising, Mummy’s eyerolls increased in speed and intensity. It could have gone either way, until the farting scene. Finally the tension broke and M&D began to relax and join in with the row P compers.

This year the Shrek team have joined forces with the Centrepoint charity for young homeless people with a Shrekified version of an old favourite. To donate £2 to Centrepoint’s Christmas appeal, simply text OGRE12 £2 to 70070. 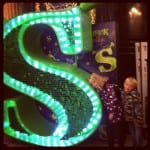 As West End theatre tickets go, Shrek is not the most expensive, however it is an investment, for what is essentially a pantomime. That said, the pantomime slapstick is smoothly done, the cheese comes with a healthy dollop of professional acting, and the singers actually have great voices! We declared it “awesome” and “brilliant” so M&D gave in their penny and added a pound, finally shaking off their responsible and boring jackets and joining in the fun.

If you want to see the best pantomime ever, Shrek is the one for you!

Disclosure: we were given our tickets to Shrek in return for this review. All editorial content and opinions are our own.