Over the bank holiday weekend we were camping. We had the best time, kids that got on well, with the natural friendship that comes from seeing each other week in, week out since birth. Friends that know us so well that we can bicker with our partners, yell at children who’ve disappeared to a new friend’s tent without telling us, and eat their Cheerios when ours are all gone. And with whom we laugh.

First night there, and we were all woken at 2am by a male voice shouting for Amber. It started in the distance, and over the next 20 minutes got closer and closer. I wandered out into the moonlight (full moon), worried that someone had lost a child on a night time loo visit. It was spooky out there, so I headed back to my sleeping bag. Eventually he found Amber and we dozed off again.

“Oh a child, definitely. Who has pets with human names? I’ve never understood that.”

“Yeah you’re right, it is a bit weird.” I replied. “Mind you my first pet was a black Labrador called Jason.”

Cue snorts, as Actually Daddy – Jason – picks that moment to wander back from the loo. We explain.

“Oh,” he joins in. “And I once had a Yorkshire terrier named Maddie.” A look of incredulity as my friend contemplates our daughter.

“Oh yes! And after Jason, we got an Alsation called Lisa!” I recalled. “Not to mention my Mum’s dog Lily. Ooh and don’t forget Rupert, and Holly. Even Poppy’s a human name now!” 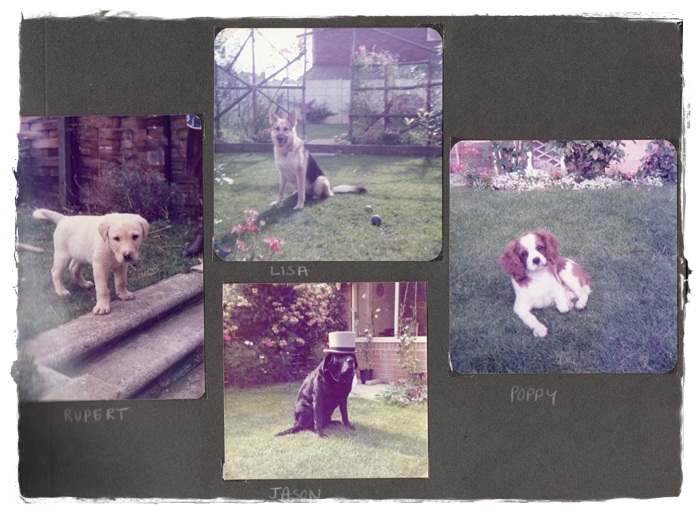 A page from my teenage photo album says it all!

Turns out the man in the small hours was looking for his wife, who’d arrived (much) earlier than him with the kids and gone to sleep!

Have you ever had any pets with human names?

I’m linking this post to the Gallery at Sticky Fingers, where the theme today is pets.

10 tips for kids to help with times tables: Wot so Funee?

44 thoughts on “Pets with human names”