This year we attended our first festival as a family. Prior to my arrival, M&D spent a fair bit of time at festivals, by all accounts being carefree and jolly, though how that’s possible without the presence of a fun-loving child, I have no idea. Anyway, they’ve been in enforced festival-hibernation for 8 years, and this was the summer they intended to go back to their grass roots – literally. We started with Magic Summer Live – a music festival, breaking ourselves in gently with just one day. That ticked, could we manage a whole weekend? We donned our wellies and shorts and headed off to review the Just So Festival. 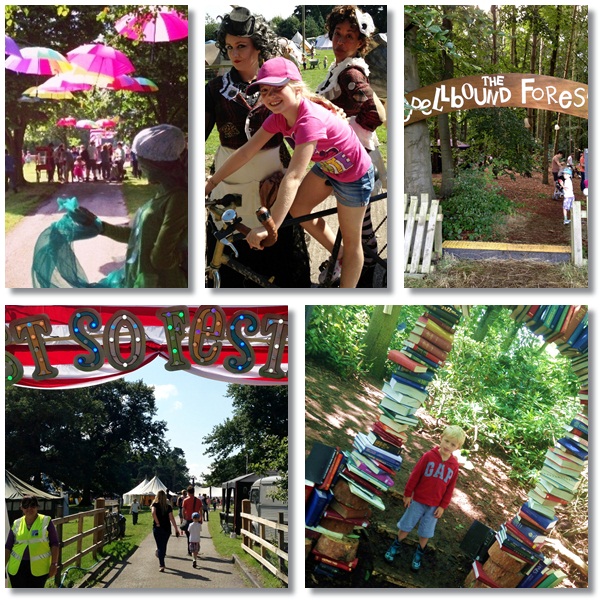 We loved the colourful and imaginative design of the site.

As we drove up the M1 to Rode Hall in Cheshire, Mummy tweeted her unhappiness at the prospect of pitching a tent in the rain, but for once the weather was better “up North” than it was in London! (She’s allowed to say that, she’s from Manchester, where it rains pretty much all the time). Arriving in good time we found what looked like a decent pitch, nice and flat, not too much sheep poo, and enough space for some decorum amongst our neighbouring tents. So far so good. There were tears and tantrums (mostly from the boys) over having to carry all our stuff a good 10 minute walk from the car park, but we were done in good time, and headed off to play.

Just So Festival – the best bits:

Atmosphere: The site was lovely, colourful, and well spread out, so that even when it got busy over the weekend it never felt like too many people were there. That was nice – the Bug especially hates being crushed between random adult bottoms as he makes his way through a crowd. I was quite keen to take a lazy ride in one of the site’s trolleys – they were all booked up on arrival, so if you need one for small children, book ahead – but I had to admit that really the whole site was walkable. 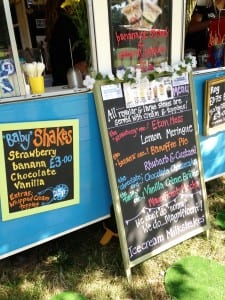 Food and drink: Mummy was fretting about how much food to take. She needn’t have worried, there were tons of food outlets on the site, all of them clean, well organised, and mostly yummy. From stone-baked pizzas to the most incredible dessert milkshakes I’ve ever had (sorry Shaken Cow, these even beat yours!) there was just about every kind of cuisine you could want. Steer clear of the Thai, it’s not very Thai-like. There was a bar for Daddy’s cider, a barn full of hay bales to sit on in the event of rain, a toastie caravan, and decent coffee, to counteract the sleepless nights (more on that further down). There were even fresh croissants in the morning, and organic fresh bread loaves. So largely, the food gets a big tick from us! 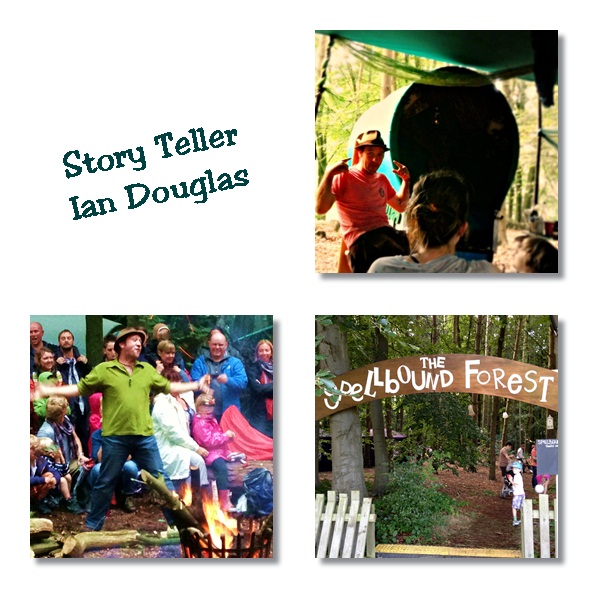 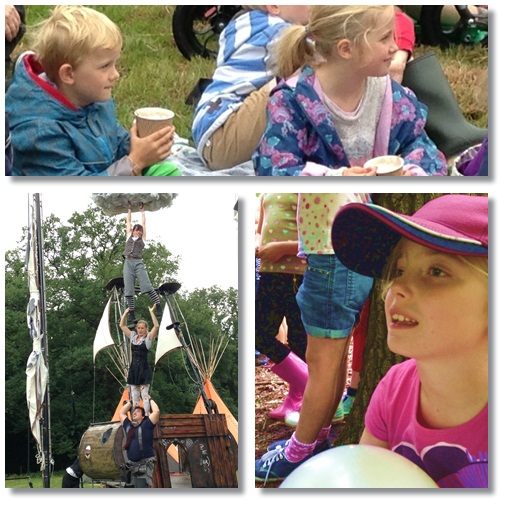 In fact, it was so good, you just have to see some of it for yourself: 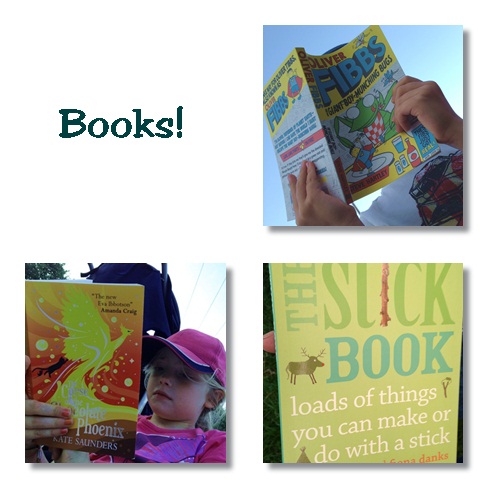 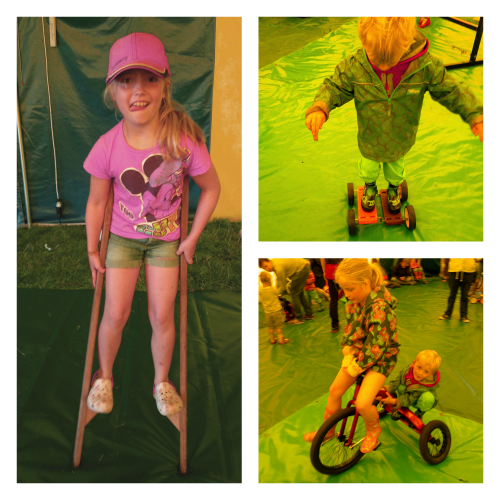 Just So Festival – the worst bits:

Tales of the Fairy Fey: We don’t have any photos of this as we were asked not to take pictures. I should first of all say that Mummy was keen to go to this area of the festival, having overheard someone saying how the fairy village, lit up at night, was one of the best things, but we didn’t like it. From the barefoot walking through deep mud, to the storyteller’s desperate desire to make sure we’d seen her hairy armpits, this was so not up our street. The singing was weird. The fairy queen mixed up herbs to take because she didn’t want the baby that was in her belly (yes, they covered that at a children’s festival!) and Mummy put her disgusted face on. Mummy told me there were fairies floating in the trees, but as I pointed out to her, she was off her trolley, because there were no fairies, “just a load of old dresses from the charity shop!” Not a high point.

Journalist and Editor workshops: This was the only bookable session I did (and there were lots – plan ahead if you want to make sure you get to do the things you fancy). Although it sounded interesting, and could have been if it had been well executed, it was disappointing. To be fair, the journalist who came to talk the small group about what makes a good newspaper story, was nice enough, but he didn’t engage all of his group, focusing his attention on the children (and mothers!) who shouted loudest. I was really keen, but very much left on the sidelines. Undeterred, I went off to interview my chosen subjects – the circus performers – about their careers. They were brilliant, but again my feedback to the Editor fell on pretty much deaf ears. I’m probably not pushy enough. A shame, because this could have been brilliant. 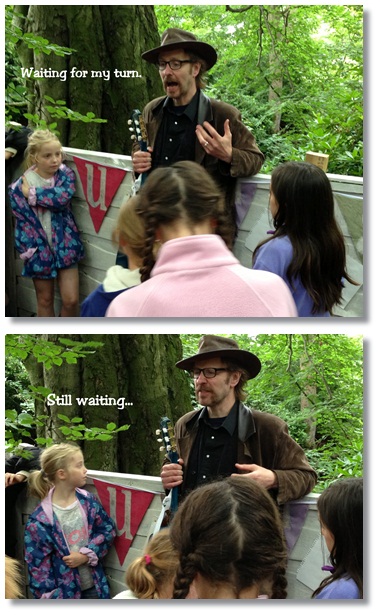 The walk to the campsite: Probably not the organisers fault, but with young children walking with camping equipment is a pain, and there was very little evidence of help with transporting stuff from the car. We left early (see below) and Daddy brought the car closer to the gate to transport our gear back a bit more easily. There were no people around as the festival was still in full swing, but he was challenged quite aggressively by site security, and told he was being irresponsible and dangerous. Hmmm…

Other people’s children: Totally not the organisers fault, but the family that managed to squeeze their tent into the gap we left when we pitched up had a baby. The baby wasn’t the problem, but she woke her older sister up in the morning at 5.30am. So the whole family started their day with a rousing chorus of Baa Baa Black Sheep. And so did we. Consequently we were too tired to enjoy the Festival’s later attractions and missed the lantern parade. Hence the early departure.

Just So Festival – our verdict

There’s a lot about the Just So Festival that we liked. It’s well organised, bright and cheerful, and very safe. The campsite is good, though it could do with being cleaned of a bit more sheep poo. Loos are plentiful, better than your average campsite toilets, and mostly well-stocked. Same goes for the showers, although there needed to be more – the queues were long. Food is mostly very good, though quite expensive – there are cash machines, which was lucky for us!

Volunteers, stall-holders and staff were friendly and polite, apart from the hired-in security people, one of whom needed some more manners.

Activities were a mixture though. We thought we’d see some excellent street-style performers, and we did, but we also saw some very lacklustre activites, and some well-intentioned but poorly executed workshops. The professional performers and workshop organisers stood out so far above the amateur that the latter really looked quite poor by comparison.

Should you go? It depends. We decided that overall, the Just So Festival was best for very young children. Whilst there were some activities aimed at my age group, most of the festival seemed to be aimed at children under 5. I like a good story as much as next pre-schooler, but spraying mud-coloured water at an A4 sheet of paper with a plastic water pistol is not my idea of fun art.

The best part of all? Family time. Chilling out time. Time to read, play, blow bubbles… 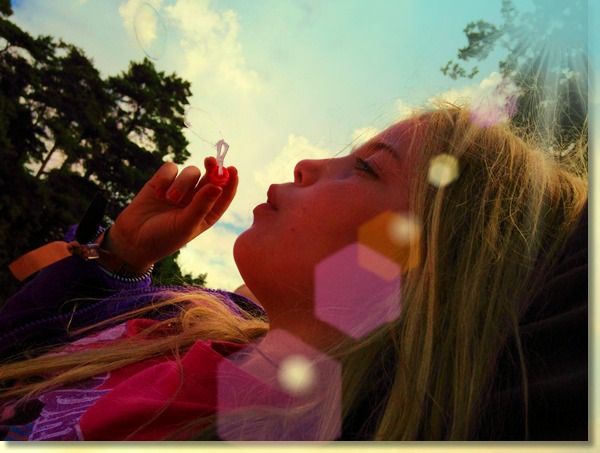 If your family loves the outdoors, enjoys a good story, and adores any kind of craft, you will probably enjoy the Just So Festival. I’ll be unapologetically non-pc here and say that we are not a tree-huggy family. If you are, go – and let us know what you think. 🙂

More on the Just So Festival

I’m adding this post to Coombe Mill’s Country Kids linky, which is all about outdoor fun with the kids, and with Mums Do Travel’s #familydays

Disclosure: we recieved free tickets from the Just So Festival for the purposes of this review.