What happens if you take not two, but four kids camping, on your own? In torrential rain? Four hours from home?

This is how I spent the half-term holidays. Actually Daddy has no more holiday left to take from his job, but the offer from Old Bidlake Farm to check out one of their bell tents was too tempting to resist, and I’m always suspicious of a school holiday that has nothing written on the calendar. “It’ll be great!” I decided. “I’ll go on my own, we’ll have fun, all under canvas together. Actually,” – I felt brave – “let’s invite your friends too, will be easy!” I practically sang to my two children. They looked a little, shall we say, incredulous, but they weren’t about to argue, and swiftly started Whatsapping to see who was free.

Come the morning of our trip, it was pouring with rain. “Good luck with this!” affirmed mothers as they handed me their offspring, complete with wellies, raincoats, and spare towels. “Will be fine!” I trilled as they waved me off into the deluge. 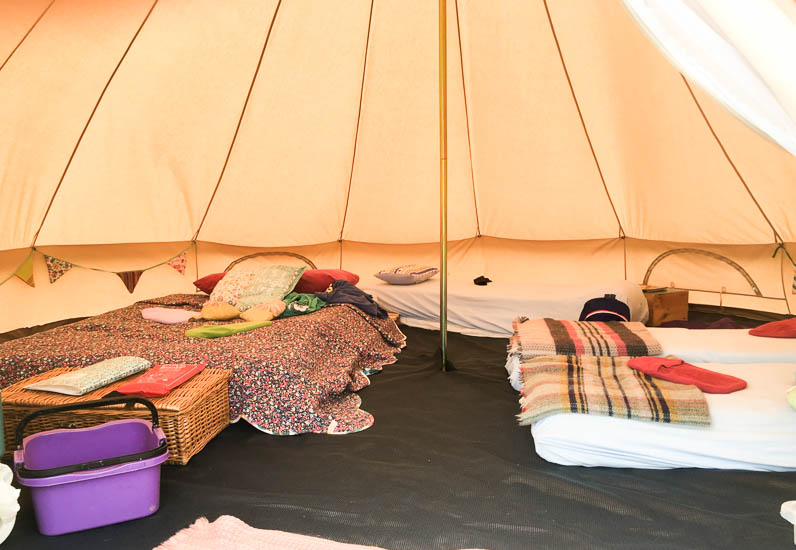 And it was. About 2 hours down the M3 the rain thinned, and finally petered out. It’s always brighter at the coast. As the roads got narrower I breathed in that sense of relaxation that you get from going somewhere greener, slower, and more gentle. By the time I started to go head to head with enormous tractors coming the other way, even the kids were jovial about the journey. “Next time, Mum, just stop the car and I’ll get out and tell him to reverse back down the lane!” Even arrival and unpacking felt easy, as the kids jostled for who could be most helpful, and the tent was stocked in no time. You see, when you take other people’s kids on holiday, everyone tries harder to be on their best behaviour.

Sue and Nick, the owners of this lovely farm have thought of everything. We drove onto the large field to unload into one of the four pre-erected bell tents. Each tent has comfortable futons, with plenty of blankets, hot water bottles, and spare cushions. All we needed was pillows and duvets, and we were set. A large cool box was already there, and we collected ice packs from the freezer at the main house. There were even wicker baskets and box tables for storage, so we could keep the tent tidy and always know where the torches were!

We were given a crate full of crockery and cutlery that was just for us, and shown the kitchen area, completely stocked with teabags and coffee, pots and pans, and every kind of cooking utensil. We really didn’t need to have brought a thing, which was just as well, because I hadn’t been able to fit anything else in the car! For the four tents, there was plenty of fridge and freezer space and a huge table to eat at, should the field not be to our liking. Each tent had its own picnic table, windbreak, and wood fire stove too, so there was never any reason to feel on top of each other.

In fact, on the first night, we made use of the farm’s wood-burning pizza oven. The owners supply wood pellets for the fire, and matches and firelighter to get it going. We took pizza dough mix, and the kids spent a happy hour kneading, stretching, and decorating the pizza bases. Just as I’d perfected the technique, the heavens opened again, which gave us the opportunity to take advantage of the undercover seating area, and we ate as we watched rabbits run for cover in nearby fields. 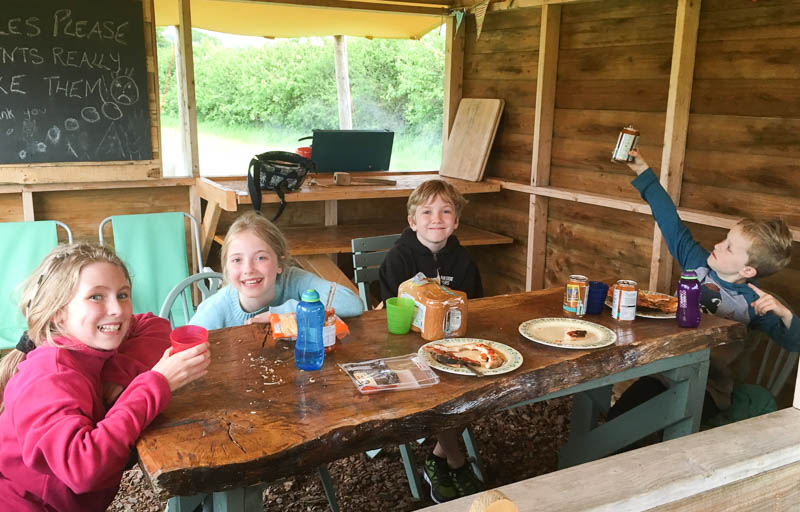 Sending four children off to do the dishes is much less nerve-wracking than waving two off into the darkness – for one thing, there’s safety in numbers, and for another, there’s much less likelihood of bickering. Although amusingly, the girls chose to do the washing up, while the boys went t0 acquire the rechargeable lanterns provided at the farm, and get rid of the recycling. Who says there’s nothing innate in gender stereotyping?!

It wasn’t even hard to get them into bed early, such was the excitement of a sleepover under canvas, and as the rain lashed the tent walls, the boys gossiped (yes, the boys), and the girls read quietly by torchlight until I sent them off to sleep by issuing a choice – go to sleep, or go out in the rain and brush your teeth. Don’t tell their parents! 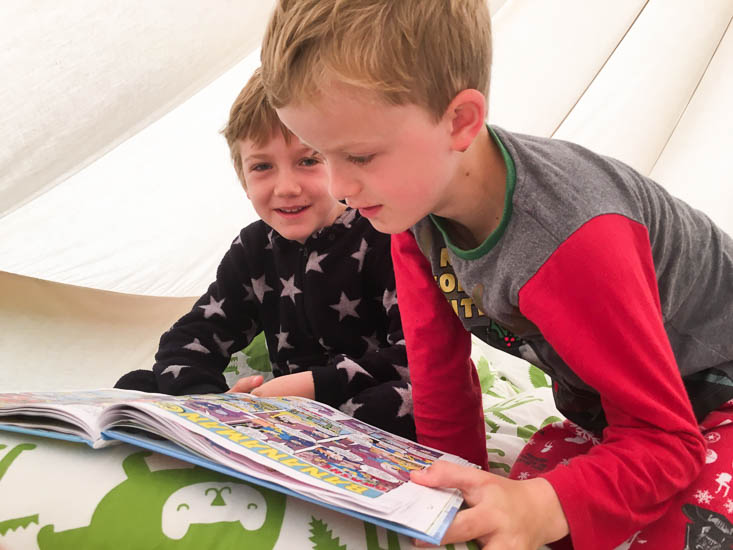 We had a lazy start the next morning, as I chose to turn a blind eye to the iPads that came out, and avail myself of a proper coffee from the kitchen’s cafetière. Then, as they began to surface, I fried eggs from the farm’s hens, insisted on toothbrushing, and – encouraged by the proper shower cubicles and beautiful toiletries – braved a shower. It was actually really good and, refreshed for the day, we set off to do some fossil hunting at Charmouth beach, a short drive away. 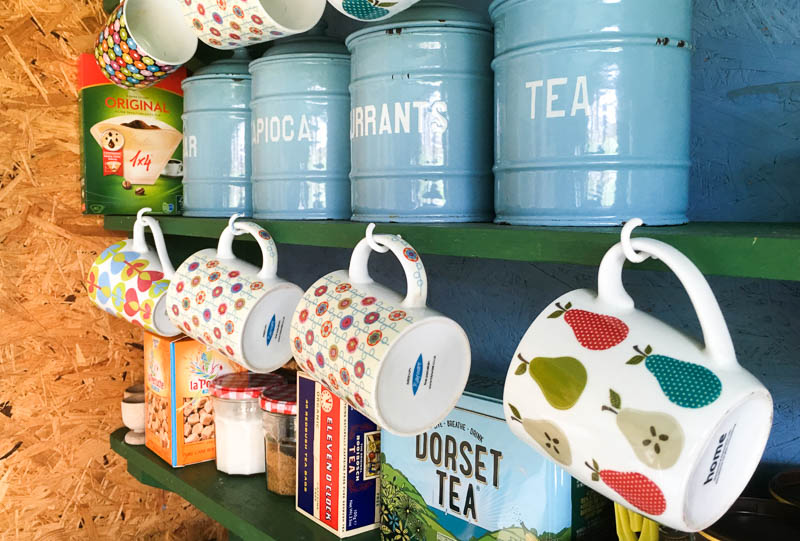 Charmouth beach is renowned for yielding fossils, particularly after stormy weather, so we held out great hopes for finding a souvenir of our trip. It’s a long, stony beach, and the further you venture, the more likely you will be to find something special. No-one was up for a long walk, but we did see some fascinating fossils embedded in the giant rocks close to the promenade.

If you’re not lucky on the beach, the Charmouth Heritage Coast Centre will sell you a fossil at a very reasonable price, as well as being an ideal place to while away an hour in the rain. The history of the beach, fossils, and the wildlife in the area is laid out to appeal to families, and there are some good educational tools for children who want to explore in a little more detail. There’s also a decent café for some basic meals. 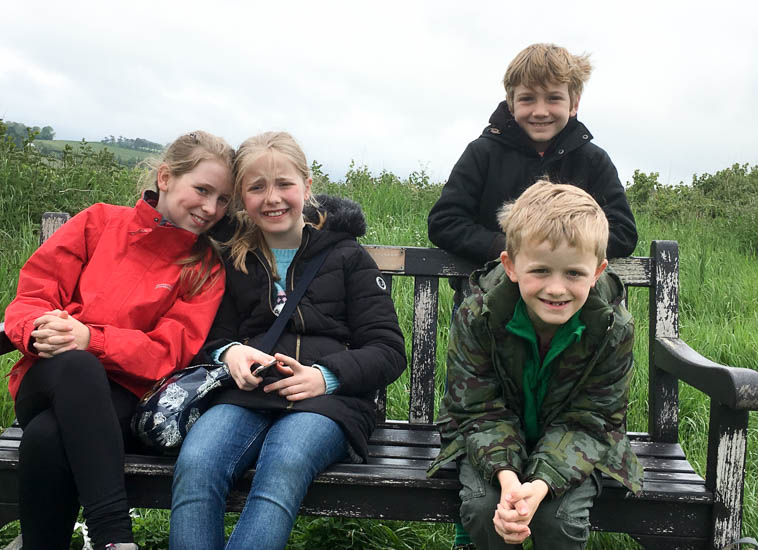 Fed and re-energised, everyone was up for the short walk up to the headland (although we did have to avail ourselves of the bench at the top for a hypo treatment, note the grimace)! No-one complained about the rain, no-one minded the cold, and no-one grumbled about the hill. As I say, four are easier than two! 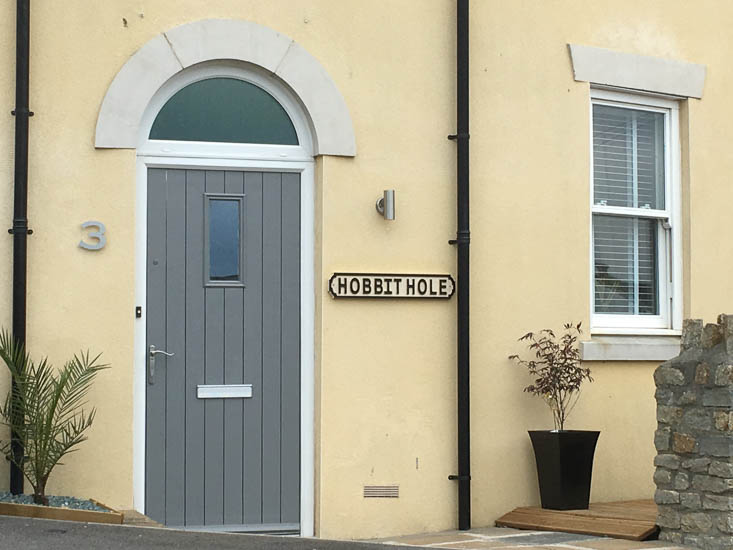 At this point the kids were all for heading back to the farm for some quiet time, but I knew we had hours to kill once we were back, and I’d promised them a proper Dorset ice cream, so we drove the 10 minutes to Lyme Regis, where I knew there would be plenty of tourists to fuel a few good ice cream shops. We weren’t disappointed, and we took our Frank and Beans gelato cones down to the beach which was by now – mercifully – free of rain. 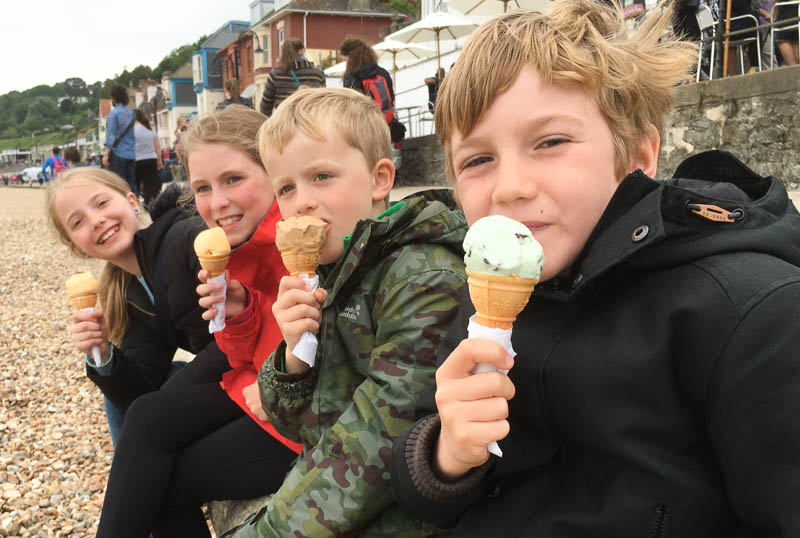 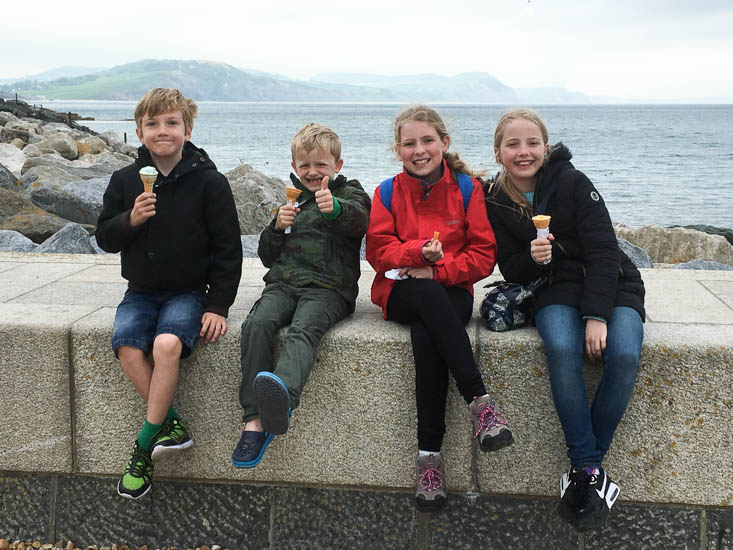 We must have looked happy, because the weather gods took note, and the rain stayed away for the rest of our trip. The kids were keen to get back to the tents to explore the stack of games provided by the farm, so I lolled in a deck chair for an hour with a magazine and a coffee, while they entertained each other in the tent. Again, four are better than two. 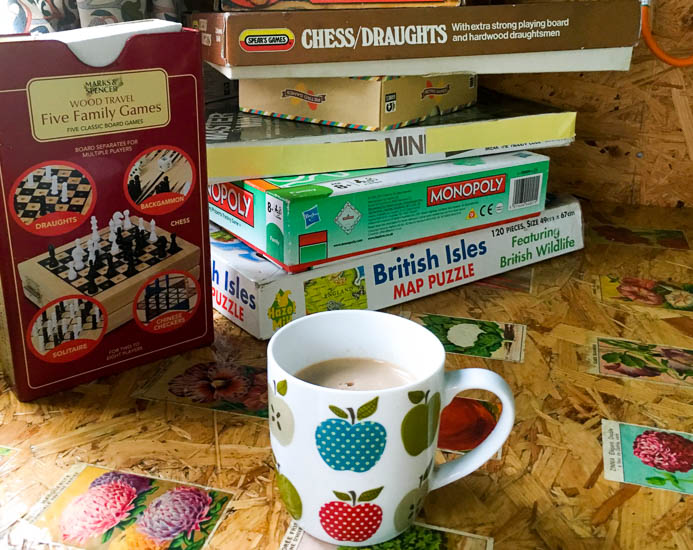 One thing I’ve always found about a camping trip, is that children become magnetic to each other. Before long they were back out in the fresh air, and soon after that the children from across the field discovered that we had a cricket bat and some tennis balls. So while I cooked sausages over the wood stove, a prolonged game of rounders ensued. I don’t think we ever learned the names of our companions, but we didn’t need them. The universal language of sport and fun had them shrieking with laughter until it was dark, only returning to the hearth when s’mores became more attractive than the game. They sandwiched toasted marshmallows between chocolate biscuits, debated the need for tooth brushing only briefly, then tumbled into bed and were fast asleep in moments.

I think I’ve found my happy place where camping is concerned. I love to hang out in the fresh air with my kids; I adore a wood fire, and good coffee outside on a cold morning; sleeping in a huddle under canvas appeals to my sense of adventure and bonds my family. I don’t love the packing, carting the contents of the garage and a saggy airbed halfway round the country; I don’t enjoy sharing a muddy shower block, or queuing for the dregs of someone else’s dishwater; I hate packing away a tent when the fun is all over.

At Old Bidlake Farm I didn’t have to. It’s real camping, with absolutely none of the hard work. 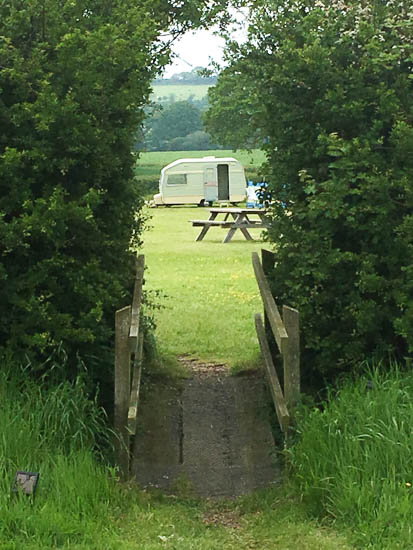 Old Bidlake Farm has 4 bell-tents, all kitted out with groundsheets, futons, bottom sheets, cool boxes and storage. Each tent has its own picnic bench, wood burner, deck chairs and wind-break. You also get a crate of crockery and cutlery for your personal use, as well as a plastic jerry can. Freezer packs and lanterns are provided, and there are plenty of them.

We also used the little old-fashioned caravan by our tent for the kids to play games in, and it would work well as a sheltered eating space on a rainy day. There’s another pretty caravan, and space for one or two more camping pitches close to the main house. The owners turn up at breakfast most days and are extremely helpful with advice on the area, or practical assistance.

There are two separate toilet and shower cubicles which are beautifully maintained, a large kitchen diner area, and another fridge on the other side of the farm, with ice packs and lanterns for campers to borrow. Wood can be purchased from an honesty box, and firelighters are provided. There’s also a baby bath and high chair supplied, and a list of family friendly local activities is posted on a notice board every day.

Charmouth beach car park is a pay and display with plenty of spaces. £1.20 will get you 4 hours, or you can pay £2 for the whole day.

Lyme Regis is a busy little town, and parking is not easy to find. If you plan to spend a few hours, park a little way out and walk in, it’s much easier. 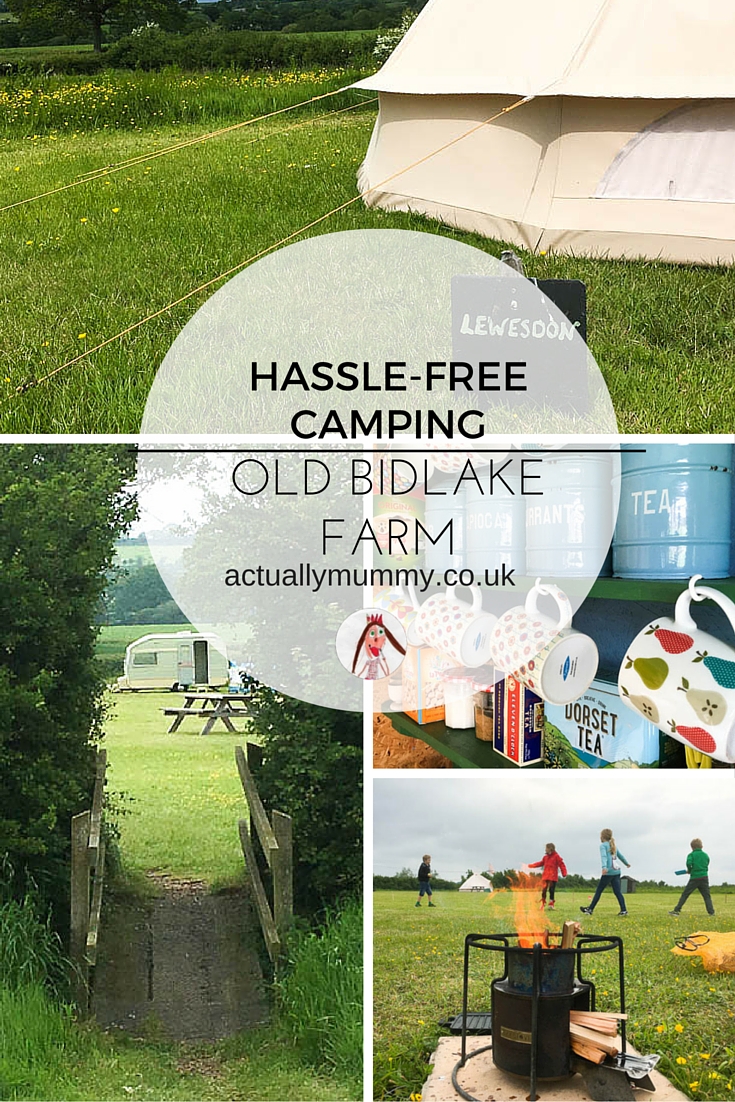 8 thoughts on “Old Bidlake Farm – proper camping, without the hassle”