“From then on your life just changes forever”

If your child has experienced the loss of a parent, or someone very close to them, I hope this episode of the Teenage Kicks Podcast will help. My guest is Mark Lemon, an award-winning children’s author who talks openly about his own grief after the murder of his Dad.

A bit about Mark Lemon

Mark is the host of the brilliant podcast, Grief is My Superpower, where he chats with his guests about their losses, in the hope of helping children and families come to terms with their own bereavements, and find a way through sadness.

He has also turned his own tragedy into a massive positive, by writing The Magical Wood, a book for bereaved children. The book has recently received recognition from Prince Harry, who was just 12 – the same age as Mark – when his mother Diana also died in shocking circumstances.

Why children need support to process  the death of a parent

As an adult Mark wrote an article for The Guardian that was to be the beginning of his advocacy for bereaved children, and ultimately the drive towards his award winning book.

Through his writing he realised how many children were struggling to cope with trauma after the death of a parent, and since then – as well as writing and speaking about bereavement from a child’s point of view – he’s opened up his social channels to allow his followers a place to see his sadness, and to share their own.

How the death of a parent affects teenagers

We talked about what happened to Mark’s father, and how the death of a parent can shatter a child’s world. Having just started at secondary school, Mark boxed up his emotions and never really opened up throughout his teenage years about his dad’s death. But he believes that not talking about it meant that his grief was channelled in other ways, like fighting at school and not doing well in his academic work. Luckily Mark had teachers who understood where that behaviour was coming from, and supported him through school.

Mark eventually found purpose through passion, following his love of music into further education and a career. He says that doing things you love, coupled with dealing with grief and trauma as early as possible, is essential to prevent difficult emotions in adult life.

Mark also told me how important it was for him to separate what happened from the person who caused it. He made a conscious decision early on to step away from his father’s murderer, rather than dwelling on anger and revenge. 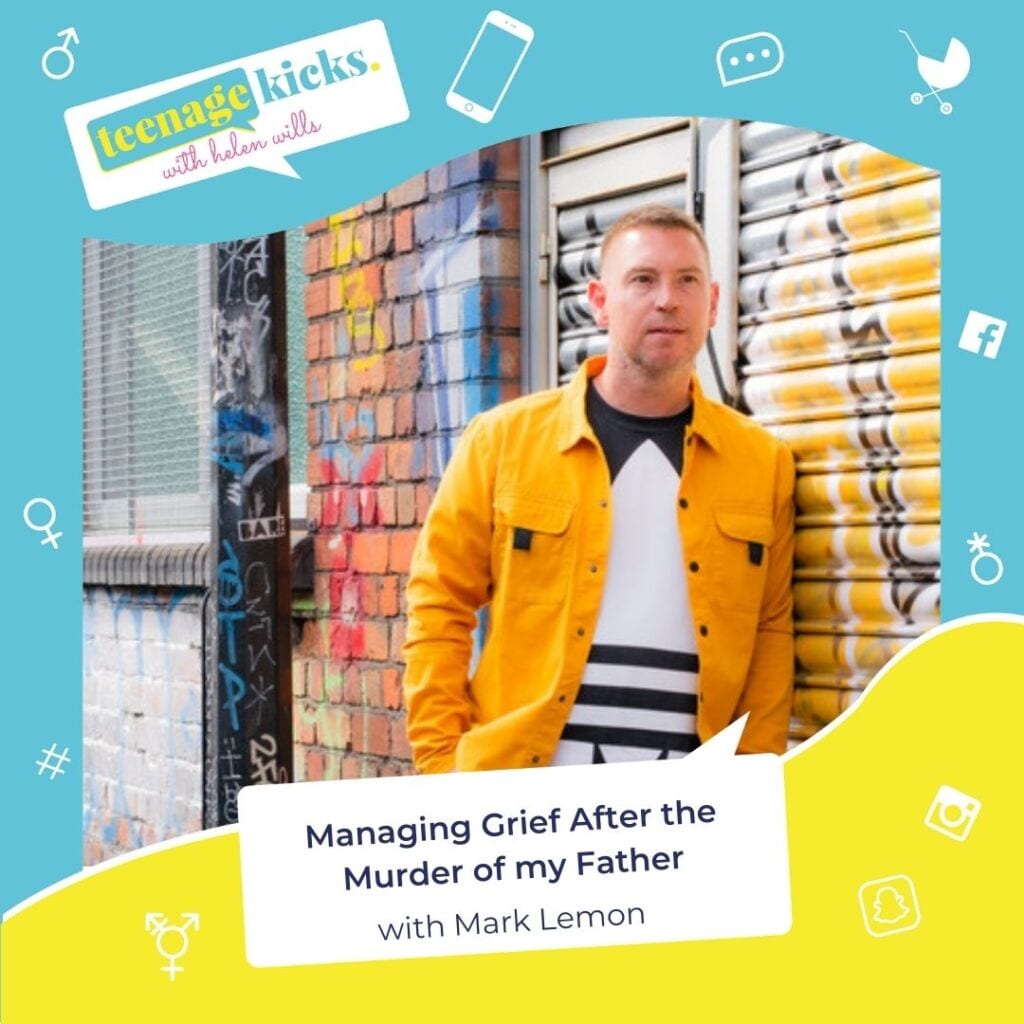 The image that stood out for me as Mark was talking was of grief being like a coat that you wear. That you never get rid of grief, it’s always with you, it’s just how you wear it depending on the day. And that it’s absolutely okay to have a day where it has to be huddled around you, just as it’s fine to have days where you throw it off and leave it on the sidelines!

“It is like that coat you put on every day. And you could either choose to take it off on the lighter days when you’re feeling okay, or on the heavier days, when you’re not feeling okay, it’s alright to keep wearing it, and embrace the feelings that you’re having.”

How to help teenagers process their feelings after losing a parent

You can hear Mark’s passion for making sure that kids are able to talk about what they’re feeling, and I loved his point that – for kids who don’t feel able to open up – the most important thing is to find something they love doing, and to do it – as much as possible! It feels like that would make a lost young person feel purposeful again, and that that’s when conversation can happen more easily. I thought that was really insightful.

Where to connect with Mark

Where to find The Magical Wood

You can also now buy The Magical Wood as an audiobook, with £2 from each sale going to palliative, neurological and bereavement support charity, Sue Ryder.

I hope this episode helps bereaved teens to feel less alone with their pain, and ultimately to talk.

Listen to the podcast:

You can find the episode in your usual podcast app, or if you prefer, you can listen online below, or through the podcast page.

Thank you so much for listening! Subscribe now to the Teenage Kicks podcast to hear about the new series when it begins. I’ll be talking to some fabulous guests about difficult things that happened to them as teenagers – including being expelled, being hospitalised with mental health problems, and battling an eating disorder – and how they overcame things to move on with their lives.

I’d love to hear from you if you have any suggestions for future topics on the Teenage Kicks podcast. Just email me on teenagekicks@gmail.com, or you can find me on Instagram and Twitter at @iamhelenwills. I appreciate every message, and love to hear from my listeners.

I’d love it if you’d rate and review the podcast on iTunes too – it would really help other people to find it. You can also find more from me on parenting teenagers on my blog Actually Mummy, and on Instagram and Twitter @iamhelenwills.

For information on your data privacy please visit Podcast.co. Please note that I am not a medical expert, and nothing in this blog or in the podcast should be taken as medical advice.

If you’re a parent of teens it can be difficult to know where to go for advice, to vent, or just to talk. So I’ve made the Teenage Kicks Facebook group, for all parents of teenagers to chat in a safe space. You can request to join by clicking the button below. It’s a private group and everyone in there will be a parent of teenagers.

And if you’re stuck for how to engage with your teenager, this list of things for teens to do might be helpful.

Season 2 of The Teenage Kicks Mental Health for Teens Podcast Has Landed!