I Want a Bra

I want a bra

I recently turned 7. Daddy says he can’t believe how old I am; Mummy doesn’t know where the time has gone. I think I am old enough to wear a bra. I know exactly what I want; I’ve tried on enough of Mummy’s to know what I like: I want lace. I want a bra. 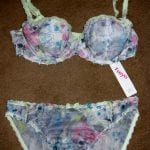 Don’t get me wrong, I do know that some things are not appropriate for a girl my age. Mummy recently acquired a set of matching bra and knickers from the gorgeous Freya Lingerie, and whilst I coveted them for their lace and pretty fabric, I would not have chosen to wear them. (Tried them on behind Mummy’s back though!) No, I want a simple white (or pink) cotton bra, with lace. 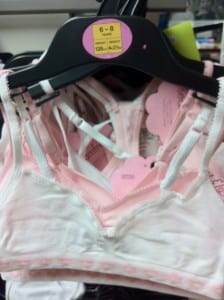 Mummy has vetoed this idea on the basis that I do not yet need one. But what I want to know is, why do M&S sell a bra for 6-year-olds if it is not necessary? For 6-year-olds! The one I want is simple and plain, and begins in a size 6-8 years. Alright, it is a crop-top style, but it is still a bra! And they sell it, so I want it. M&S are not the only parent-offenders, either. Primark sell a similar garment in a hotter pink, with sparkly embellishments. I wouldn’t even dare to ask for that one.

I am hearing that in year 6 of school there are girls who do need bras, and I am hoping that by then Mummy will see sense and get me something to cover-up in. These girls have to change for P.E. in their classroom, in front of boys. They are 11. Some of them do not have breasts, but some of them do, and I can’t believe it doesn’t embarass them. I mean, I am 7 and I won’t even let Mummy and the Bug share a toilet with me!

The debate rages in our house; I want everything I see that draws me away from babyish ways; meanwhile Mummy is strictly against it and wants me to remain a child for as long as possible. Here is how she showed it: 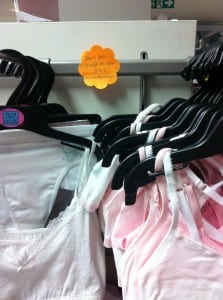 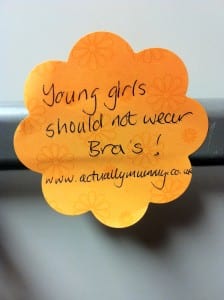 So what is the right age for a girl to get a bra?

I’m also updating this post to link up with Mummy Barrow, who is having her own rant about bras today!