Recently, the Bug celebrated his eighth birthday. It has taken me eight years to give him the bedroom of his dreams, and four to post about phase 1. With phase 2 completed when he moved into his new bunk bed, I decided it was finally time to publish the cuteness that is him discovering his new Star Wars bedroom – he was four!

How to create a Star Wars room makeover 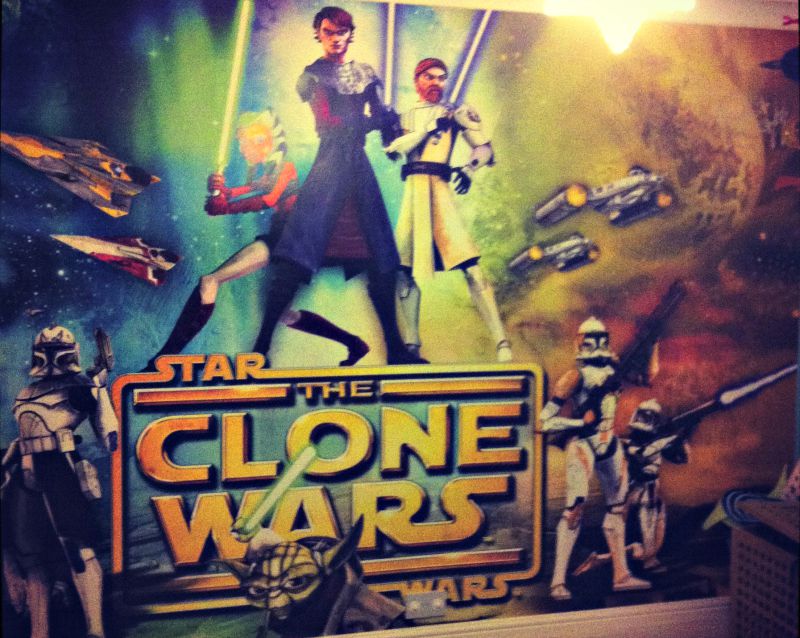 From the age of four, my son has been obsessed with Star Wars. Other themes have drifted in and out of his life (Skylanders, Moshi Monsters, Minions), but Star Wars has always been a classic, as it is with everyone who gets the force. When it came time to move on from the pink room he’d inherited when we moved house, the choice of theme was never in question.

Take a look at the video to see what we did:

The key feature of this room – and the most expensive, at £800 – was the feature wallpaper. Ours came from Photowall, who have a huge range of murals, from nature images to caricature designs. I was nervous about how this would work, but actually it’s a really simple concept. You measure your wall, order online, and the mural is made up to fit, in easy to align wallpaper strips, just like normal wallpaper. That said, I’ve never been good at hanging wallpaper, so did pay a decorator to do that part. He was fascinated, and got all his mates in to take a look once he’d finished!

The rest of the makeover was done using inexpensive bric-a-brac that was easy to source online. Here’s what we used:

I find creating room makeovers for my children immensely satisfying. I make them move out and sleep with us, or in each other’s rooms for a week while I barricade myself into their bedrooms to plan, plot, and paint. Their rooms are the best in our house; I seem to run out of steam and motivation when it comes to the rest of our home – perhaps I need 60-minute Makeovers to come and do the same for me some time!

Next up, GG has asked to convert from 4 year old pink fairy (where did all that time go???) to teal and aqua classy tween (!) for her birthday. Something tells me *Steps up to challenge.*