I had the best day out with Mummy recently. Each summer holiday we make a trip to London, where I get to hang out in Hamleys toy shop for several hours as long as I show some enthusiasm for something cultural beforehand. Well, here was my cultural exposition for this year:

Whilst I lived out my fantasy, the Bug indulged in his with Daddy at Duxford war museum. Daddy is obsessed with World War 2, and it follows that my brother must be indoctrinated accordingly. So he is now fascinated with old aircraft, mesmerised by his Airfix models, and obsessed with You Tube videos of the action (Look GG! It’s the Allies! was the cry that Mummy awoke to at the weekend whilst Daddy fobbed us off with the computer so he could read the paper).

Trouble is, his role-play now includes not only battle re-enactments between Messerschmidts and Spitfires, but the imaginary conversations between their occupants. Hence, my stick-gun obsessed brother runs around with his ‘shooter-shocker 3,000’ (I kid you not, take it up with his Nursery friends) killing Germans. I wouldn’t mind, but we will soon be in Spain, where I gather many German people like to holiday. I am dreading the shame that will be mine when the Bug discovers that all the sun-beds on the beach are taken. 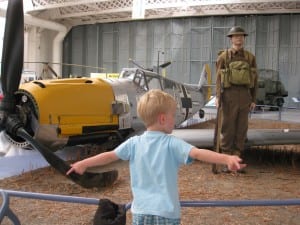 3 thoughts on “Germans On Holiday”