Today, a mother of 2 forgot to collect her children from their holiday drama class. After spending quality alone-time she rooflessly drove past the school and returned home. Alone. It was only when she walked into the empty house that she realised that no mother deserves that kind of peace and quiet. Something was missing.

Imagine our horror at realising that we had been abandoned by our own mother. Okay so it was only for 10 minutes, before she came to her senses and about-turned the car. But  me and the Bug like to milk these things and maximise the guilt – one never knows what wonders it may lead to.

The reason for her lapse in sanity was this:
Mummy recently attended the Cybermummy conference, where she was lucky enough to win an incredible quantity of SpaFinder vouchers to spend on spa treatments.

Well, Mummy was a weekly supporter of the day spa before I was born, but has learned to live with her aching muscles, brought on by an acute lack of time and resources several years ago. She positively glowed when the postman delivered the loot, and considered running away to the countryside for an entire weekend! 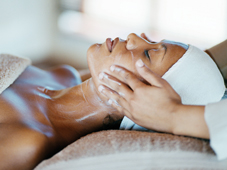 However, having handed over some of her bounty to our Cybermummy babysitters (only fair, given the fun and games we had with them!) she finally settled on a series of treatments at our local Champneys day spa. One heavenly hot-stone massage and a ‘Head in the Clouds’ later, she was quite literally ‘out to lunch’, her worries well-and-truly kissed goodbye!

Or so she thought. As I demanded to know what could possibly have kept her from fulfilling her parental duties I casually flicked through the treatment brochure. ‘A ‘Chocolate Wrapper?’ I exclaimed. ‘Oh yes, they cover you in a warm massage cream, wrap you in warm blankets, dim the lights and play soft music – you smell like a chocolate orange. It’s wonderful.’ ‘I want one, when can I have one, can I Mummy pleeeeease?’

And so the monologue continued until Mummy began to forget that she had ever found it possible to relax, and wished she had booked us into a drama class that included bed and breakfast. Eventually she got out her box of oils (she is a qualified aromatherapist) and declared a Play Day Spa. Another great holiday activity, this one involves converting the kitchen table into a massage couch. Some towels from the airing cupboard, a bit of Enya, and dimmed lights are all you need. Oh, and a Mummy who is prepared to use all her lotions on her 6-year-old. And her nail polish for the toes (blue for the Bug). And her perfume because why not…

Lucky she still has some of those vouchers left…;)

10 Things You Didn’t Know About Me