5 Decades of School with M&S 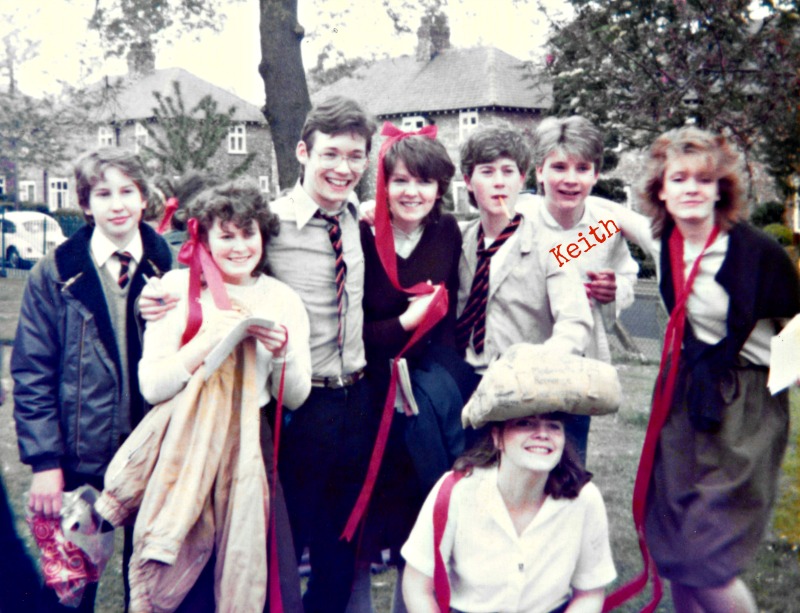 I’m buying school uniform. I’m in Monkhouses, the shop I only visit once a year, to queue, and queue, and queue – or so it feels, to a ten-year-old desperate to cling on to the last days of summer. The shop feels vast, though I know it must be ordinary, in its ordinary precinct location. It smells of newness, and stiff, shiny leather shoes. It fills me with apprehension for next week.

When I ‘left’ school in 1983, this was the motley take on our uniform. As long as it was some kind of brown, with some shade of cream, it passed. I remember being envious of Joanne’s tighter skirt, and that girl’s bigger hair (what was her name??); I had a crush on Keith, and none of us could figure out if Matthew was gay. I cried and cried that day – I still don’t know why, I was coming back to 6th form. Some kind of emotion that something was over. I begged signatures on my red ribbon, painstakingly measured at the haberdashers with my friends weeks before. I still have that ribbon, and its blue counterpart from two years later. 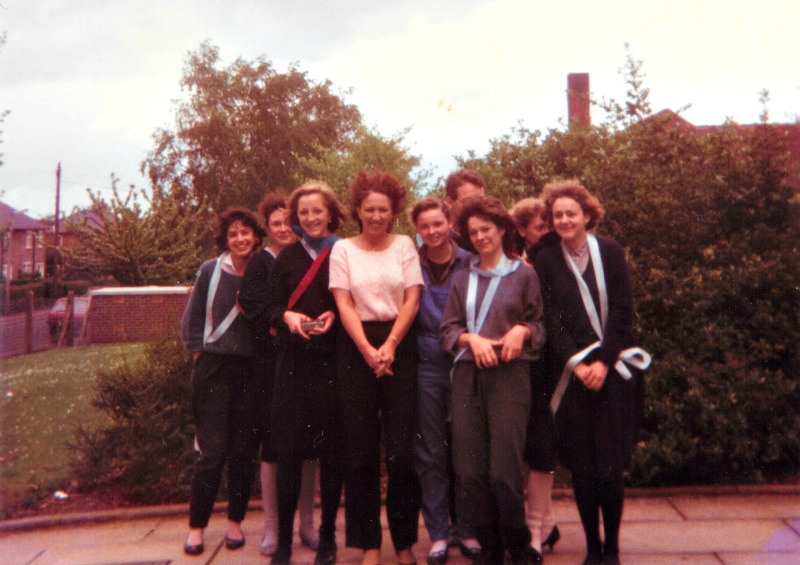 Of my primary school years I remember very little, other than the kickstone wall behind which we were never to go, for fear of colliding with pans of boiling water from the kitchen. Undoubtedly an urban myth created by the playground dinner ladies, it served very effectively to keep us in view, and out of harm’s way. I do recall one very stormy afternoon, when the rain became so unavoidable on my walk home, that I stopped trying altogether, instead revelling in the puddles squelching up through my blue leather cutout mary-janes. Of course I walked home from school on my own. I have no idea how old I was, but everyone did it. 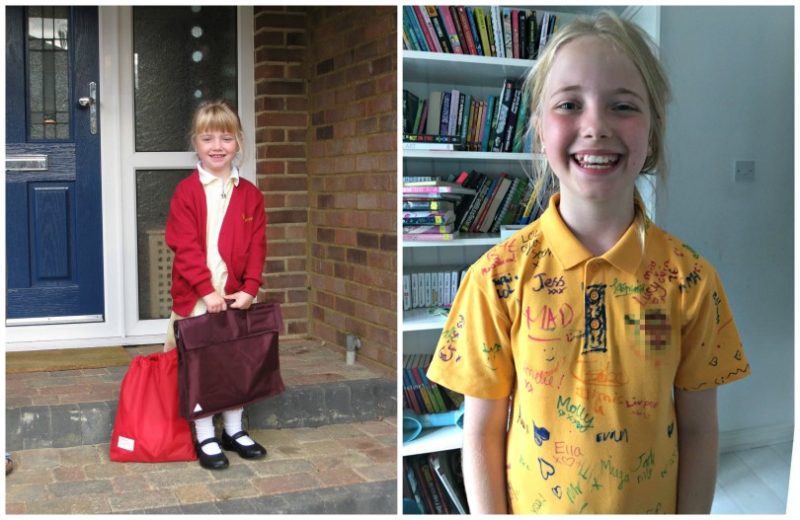 Thirty years later, and my girl shed a few tears on her last walk home from primary school. The end of an era, as far as she’s concerned; and yet, there are none of my school nerves evident over her impending new start. She longed for the day when her shirt was covered in autographs, revelled in her final weeks, and has spent the first 5 days of her holiday in intense text conversations with her friends. Summer, new schools, meet-ups and milkshakes – her world is just sitting there, waiting to be grabbed.

I adored that yellow gingham dress, purchased when she was 4. She wore it to nursery one day, proclaimed herself a big girl, and all the other kids got the hump over her too-big-for-her-boots attitude. She’s learned that over the years. Much better to win friends with empathy and humility, than with bragging and one-upmanship. I’m proud of her for figuring that out. 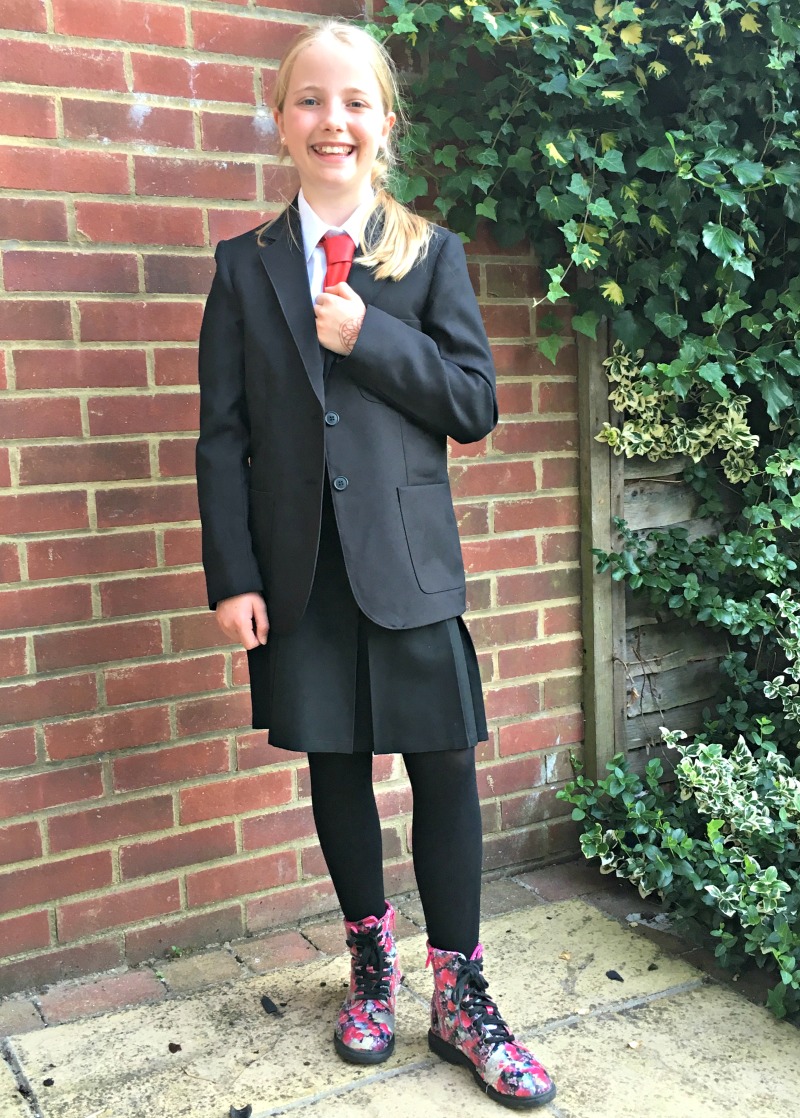 And now we are at a different juncture. The polo shirts and colourful shoes have gone to the PTA sale, and a new array of permanent pleats and boxy blazers hang in the wardrobe, to be revered with excitement for the first day of wear.

There was no angst over new uniform for her. She couldn’t wait to try on pristine black skirts and crisp white blouses. And a tie! A thing of as yet unfathomable mystery, try as she might, she hasn’t mastered the perfect knot. But then she has always thrown herself into new experiences. She has trepidation, like anyone else, but it never stops her excitement for what lies ahead. I admire that about her so much. 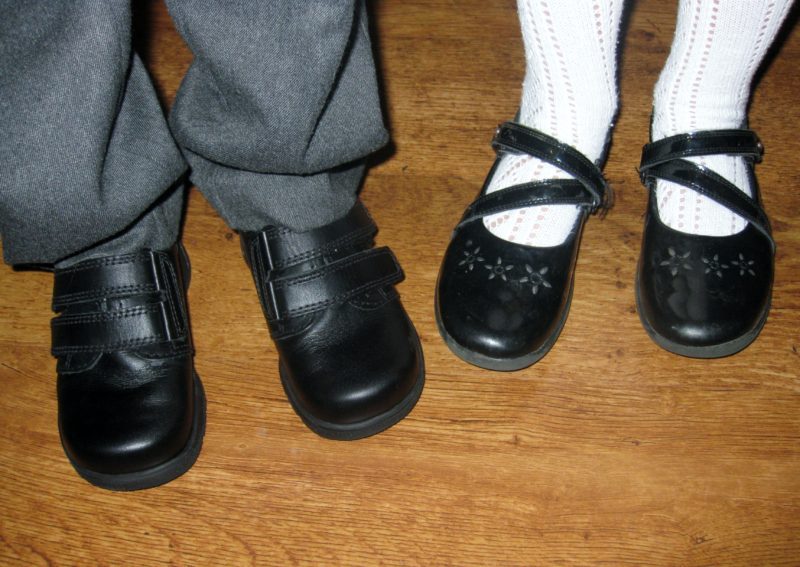 Her brother, coming up behind her, is not sure how things stand for him. He’s always had her on the playground, bossing him around, looking out for him. Now he’s on his own, it’s time for him to make his own mark in the school. The shiny newness is gone now, he’s one of the older kids, he gets to use the upper school playground, he’ll get an infant school buddy of his own – someone he needs to look out for. And soon it will be his turn to get signatures on his t-shirt. 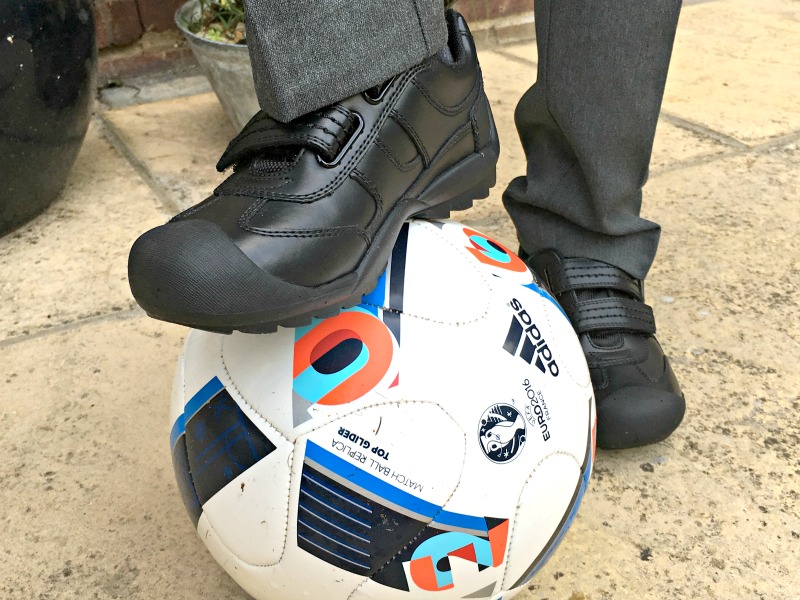 It is all moving so fast. Will I let him walk on his own before I did her? Will he go into town for milkshakes with his friends before she did? Will he have a phone earlier than her? And how many pairs of shoes am I going to have to buy for the two of them this year, when they never seem to stop growing!

Their school years are so different from mine, and yet not so much. Where I walked alone, they get lifts – though more because of the amount of things they do after school than out of any fear for their safety. Piano, saxophone, football, karate, violin, dance, drama – they are constantly busy. I berate them for time spent on iphones and tablets, but is it really much different from my permanent need to call friends as soon as I got home from school, or the hours spent lying on my bedroom floor listening to the radio? It’s all wasted time, or it’s all down time, time to switch off, vacate the brain momentarily. Where I played elastics and skipping, they play quarters or football. Where they make musical.ly videos, I tape recorded the Top 40. It has all changed. And yet not much has changed.

I struggled to find any decent images of myself in school uniform, though I know my mum has one of me in my bottle green gingham primary school dress – not dissimilar to my own daughter’s. But I have to confess to having rather a lot of ‘moments’ as I browsed the My School Years feature on the M&S website. They’ve been selling school uniform since 1927, kitted out the St Trinians girls, and now make uniform that you don’t have to iron (and some that might get away with only one wash a term – depending on your child)! I had those ’70’s pinafores, and tiny mini coats that showed your pants. School uniform has come a long way! Take a look and see if you can spot your own school style.

*Disclosure: this post is in collaboration with Marks and Spencer. All editorial and images are my own and may not be copied.