This week saw plenty of opportunity for excercising the iPhone’s photography capabilities, and I was the first to put it to the test. I have been in “Special Measures” for a week now, following my absolute and utter inability to pretend like I care about good manners in any apparent fashion. You see an annoying Bug you squash it, don’t you? And yes, I do mean my brother. Dislike the request of your mother? Hair toss, eyeroll and snort routine, innit? Daddy puts his foot down? What else is there to do but scream your indignation out?

Special Measures: “A period of forced abstinence from all things ‘treat.’ Entering a phase of Special Measures signifies withdrawal of sweets and television privileges, early bedtimes and in extreme cases, cancellation of playdates.”
* Definition courtesy of the Parenting Manual of Mummy.

Anyway, Special Measures usually sees me totally indifferent. For the first few days. As they say in all the parenting manuals, you can expect things to get worse before they get better when you start enforcing rules. This gives me the opportunity to perfect my cold stares, and to try out different vocal effects en route to achieving the most irritating screech.

This week I was doing quite well at being oblivious to it all. I could see how much it was winding up Daddy, although Mummy did a great job of keeping her cool when I tried this on her:

“I’m going to tell all my friends that you’ve been lecturing me all morning. They they’ll hate you, and tell their Mums, and then their Mums will hate you too, and you won’t have any friends on the playground!”

Finally, the worst happened, and my playdate with my best friend was under threat. I tried my best scream. It got worse, and more consequences were stacked up. No amount of drama ruffled Mummy’s feathers, and I went to bed in defeat. I couldn’t think of anything else to do. So I wrote a note. My notes to Mummy are legendary in this house, but I decided that a little financial bribery couldn’t hurt. This was waiting for her as she headed for her own bed:

Aside from family friction, the week has seen a lot of activity for Mummy. She took her queasy tummy on the Bug’s school trip – appropriately, to Insect World. Then she forgot about my treat ban, and took us all to see Horrible Histories at the theatre. Much gruesome slapstick later, we were climbing the lions of Trafalgar Square, and posing on day 68 of the Olympic Games countdown podium.

Oh, and I leave you with news that The Bug officially wants to move in with mum’s friend Lisa from The Mummy Whisperer, since discovering that she has not one, but two huge TV’s: one connected to the Wii, and the other allowing him to “use the force” on the X-Box Kinect. As you have all no doubt already seen, given Mummy’s new found obsession with Instagram – you may want to stay away from your twitter accounts until Mummy gets bored 😉 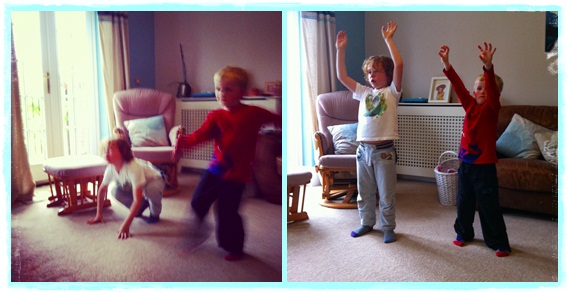