Right, the kids are at school and I have the house to myself. *Looks around shiftily and draws curtains.*

You’d be forgiven for thinking I have an illicit visitor to entertain, and in a way, I do. You see GG and the Bug have been given Nintendo 3DS XL consoles to review for Netmums. They have promised to play and explore all of the features on the new ‘elements of joy’ in our house, and I have promised to write up everything we’ve discovered about them so you can decide which Nintendo DS console is right for your family. But I’ll be damned if they’ve let me get within 3 paces of them all week since they arrived. First they became airport delay distraction, then coach transfer saviour, and eventually, a must have on the 20 minute commute to London:

I’ll be honest, I don’t let them use gaming very often at home, but I do find a hand-held console indispensible for long journeys, when boredom would otherwise kick in in the form of an elbow in the ribs or a requirement to be permanently attached to a packet of crisps. (And I may have handed them over in the odd restaurant when another glass of wine has called my name)…

So they are out for the day, and it is my turn. Here’s how I’m getting on:

With a name like 3DS XL I was expecting a large console more the size of a tablet. This would have presented me with a problem, as I like to be able to pop a DS into my bag easily, for use on trips out. So I was pleased to see that the XL isn’t much bigger than my daughter’s old DSi. It does have a much bigger screen though, which makes the gaming hugely more pleasing, as well as easier to navigate: 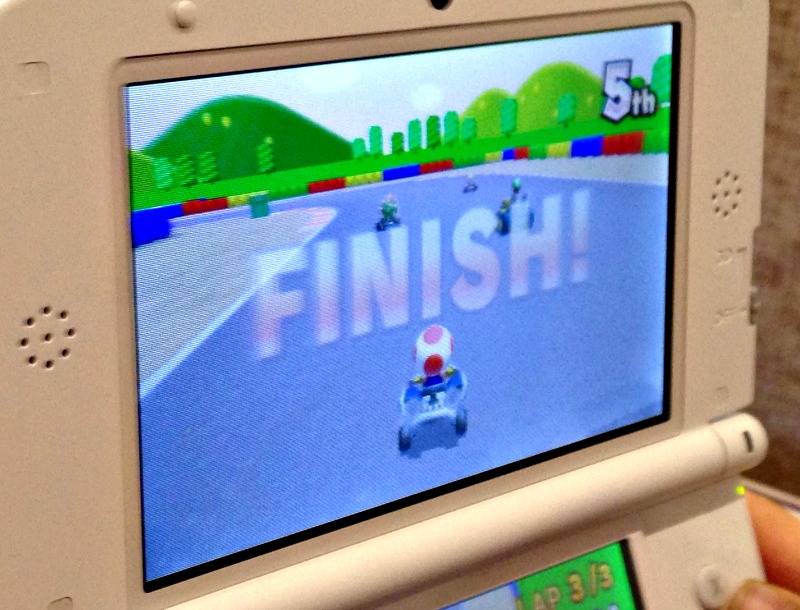 To the right of the top screen in the picture above, you’ll see a small sliding button, which controls the level of 3D visual. As you can see, the Bug prefers no 3D on the Mario Kart 7 he was sent with his console. He says it makes him misjudge his proximity to competitors in the game, so he slides it down. He does use it on other games, and GG, at 10 years old, likes to use it in Tomodatchi Life, with her Mii’s. She says it really feels like she can walk round their island and engage with the characters.

What’s brilliant about the functionality of the 3D feature, is that I can turn it on or off in the parental settings, as well as setting the maximum depth my children can see. This is useful if you’re buying a 3DS XL for a child under the age of 7 (for whom 3D viewing is not recommended by Nintendo) and hoping it will last them a few years. At a recently turned 7, the Bug prefers a medium 3D efffect, which is possibly reflective of his age. 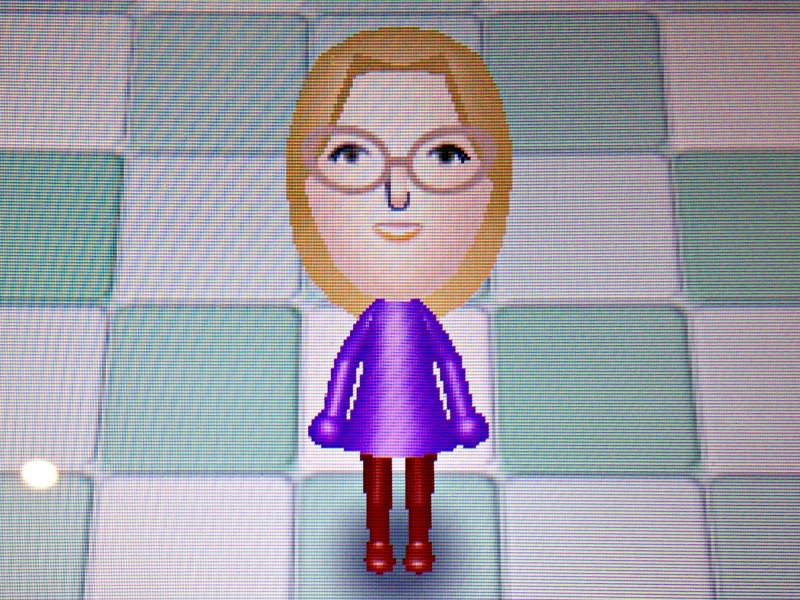 I will be in trouble when my daughter gets home, because I’ve created myself as a Mii and added myself to her Plaza Population in Streetpass. What?? I’ll tell you that again, because it’s a really fun feature. You can create Mii’s that have an uncanny resemblance to the real people in your life. No prizes for guessing who this one is. Then, if you choose to allow access to your console by other users in its proximity, you can play host to the Mii’s of other gamers nearby. I’ve set the Bug up with a Mii on Streetpass, settled both consoles next to each other, and low and behold, their green notification lights are both flashing to tell them that a new Mii has joined their Plaza. They will be delighted with me! Ahem.

We were given a credit to try this feature, and once the console is connected to the internet, it’s a very simple process to flick through the available games – some at very reasonable prices, and all with user ratings – and download them straight to your console. You can use a pre-purchased eshop card, or input credit card details, and simply switch off internet access and shop access in parental controls once you’ve finished, to prevent shock purchases 🙂

I think my children have been so busy playing their new games that they’ve yet to explore the camera, but the prospect of a 3D camera got my creative groove excited so I’ve spent half the morning lining up quirky and amusing shots of GG’s teddies being cheeky with the cakes I baked at the weekend. Oh how she will chuckle when she discovers them. Or shout. Ho hum. Unfortunately I can’t show you them here, and that’s the only niggle I have about the console – it’s not easy to upload the images you take to your computer. Although that may only be the gripe of an over-sharing blogger. Trust me – a 3D effect on your camera is FUN!

As I’ve explored my child’s 3DS XL this morning (goodness is that the time already??) I’ve discovered an activity log that tells me exactly how much time she’s had on it, broken down by day. So there can be no dispute when she claims she’s hard done by and neeeeeeds more screen time. I win. Every time. It even tells me how many steps she’s taken whilst gaming. Hold on – I’ve been letting her use it far too much! 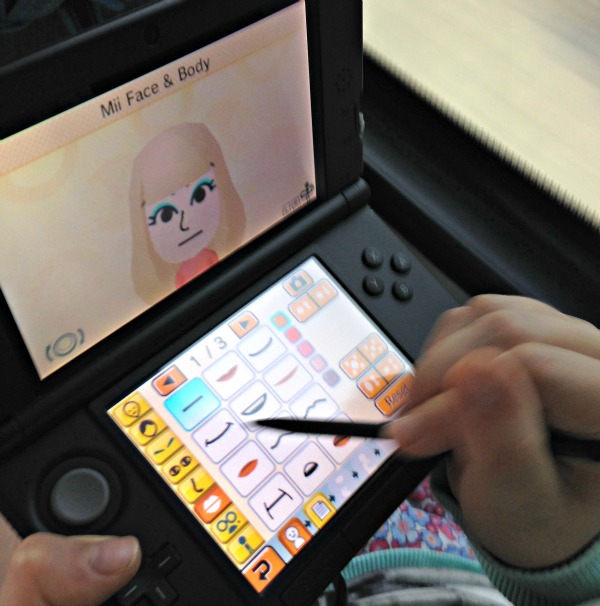 The main reason GG was saving up for a 3DS was this game. She had an old DSi but this game was set to be massive, and could only be played on tehe 3DS. (Luckily all her old games can still be played on the new console – that’s one thing I do like about Nintendo’s console upgrade features). Basically, she creates Mii’s, who then go off and live their lives, with a little sneaky input from her. So far she has at least half her class, and all our relatives living in her console. They are playing out their daily lives on the island, at the café, and in the concert hall, where she has formed a boy band of Mii’s who look uncannily like One Direction. I believe Grandma and the Bug are on the verge of falling in love. Oh, and there’s a clothes shop, with new items every day. Bliss.

All in all, I’m really pleased with our Nintendo 3DS XL consoles, and especially with the new games available. Now I really must leave you. I have to take my Mii to the Theme Park before I do the school run.

For more on the latest Nintendo DS consoles follow the links below:

A review of the 2DS by Mari’s World.
Northern Mum reviews the Nintendo 3DS.

Disclosure: I am a member of the Netmums Blogging Network, a unique community of parent bloggers from around the UK who have been handpicked by the Netmums team to review products and brands on their behalf. I may have been paid expenses, and have been supplied with a product sample for this review, but retain all editorial control.

This is a Netmum’s advertorial review.

Verulamium Spa: how to relax in style.