Deciding on a family car is a minefield, isn’t it? Do you sacrifice style for space, cool factor for safety, or cram everyone into an ego-booster? And if the latter, where will you put the buggy, the dog, and the monumental amount of shopping you seem to get through every week? Not to mention all the crap that the kids cart into the back seats and which disappears into various pockets until the loss of something important (a hairband, or a Match Attax card) drives them to a mass clearout.

Recently we were asked to test drive the new SEAT Alhambra so for one weekend I abandoned my aforementioned mid-life crisis Mini Cooper and we all plunged into the mansion-sized vehicle that is SEAT’s newest family car. I wondered how I would cope with parking it, fitting it into spaces on the school run, and figuring out how close I could get to the car in front before I was too close. Like every car, after a while you adjust. But the Alhambra is not like every car. 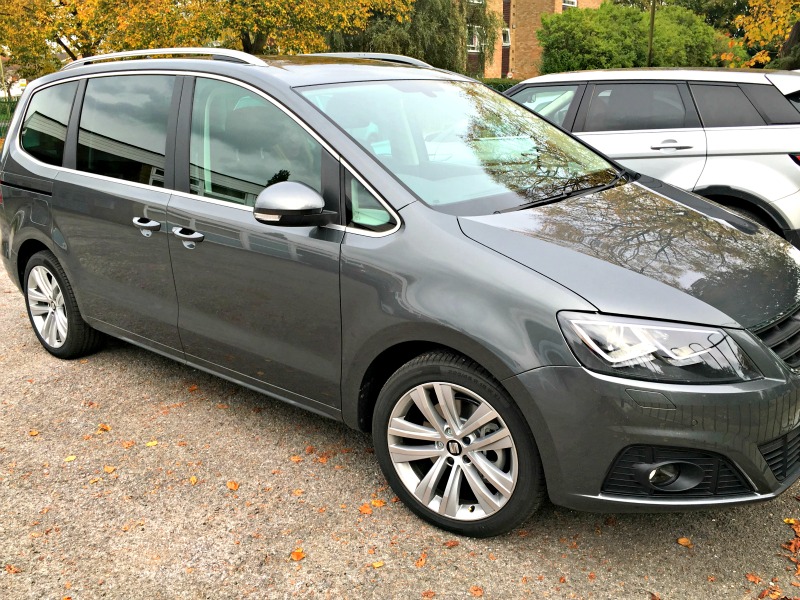 The new SEAT Alhambra is spacious, but doesn’t look like a tank.

First of all, let me say, this is a big car. But it’s not so big that it looks like a tank. In fact, as I stalked it suspiciously on my driveway, I rather liked how compact it looked, considering it has 7 seats. It is sleek and smart, and only just tall enough to make you feel like the King of the road, without the undesireable notion that you might own it.

Inside, it feels plush too, with an all-singing, all-dancing dashboard, and functions you’d expect in a top-class car. In fact it was so techy that I had to call my BMW-owning husband to ask where the ignition might be, thus perpetuating the  myth that (some) women drivers might be not very automobile savvy. 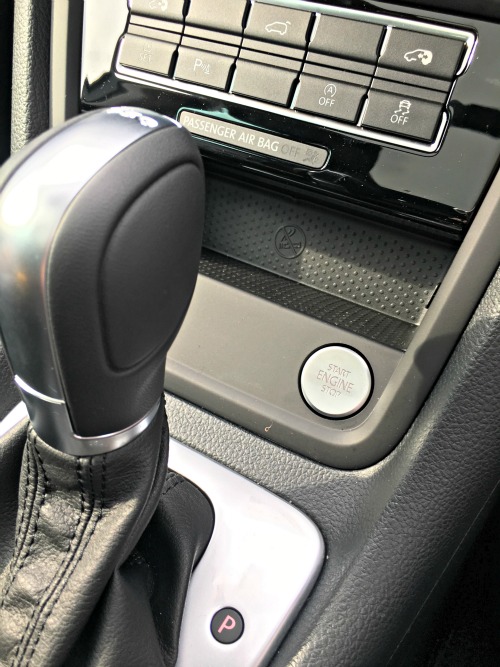 The car feels very solid and sturdy, which is important to me as a parent. My top priority, believe it or not, is the safety of the children in the event of an accident. Which is why I own a Mini, and not a Smart car, much as I think they look cute. The Alhambra has been awarded the maximum five-star Euro NCAP safety rating, so I know we’re in a good car should the worst happen. It even has a Tiredness Recognition System that notices if your driving becomes less stable, and flashes a cup of coffee symbol at you. How genius is that?

The 7 seats are all proper seats, with airbags and proper seatbelts, even the two which fold down in the back. I’ve owned a 7-seater before, and never liked using the rear seats, as they felt like cardboard versions of the real thing, with no legroom. Usually in a 7-seater the middle seat in the row behind the driver has some weird seatbelt arrangement too, which leaves you fumbling with clips uncomfortably close to your companion’s leg, and cutting off the blood flow in your neck. Not so with the Alhambra, which manages to make the centre position feel less like the short straw, and more like you matter.

And, unbelievably, when you’re using all 7 seats, there is still a decent amount of boot space in the back. Certainly room for a small dog, a Waitrose shop, and yes, even a stroller. If you fold down the two back seats and you’re a family of 5, you’re rolling in space: 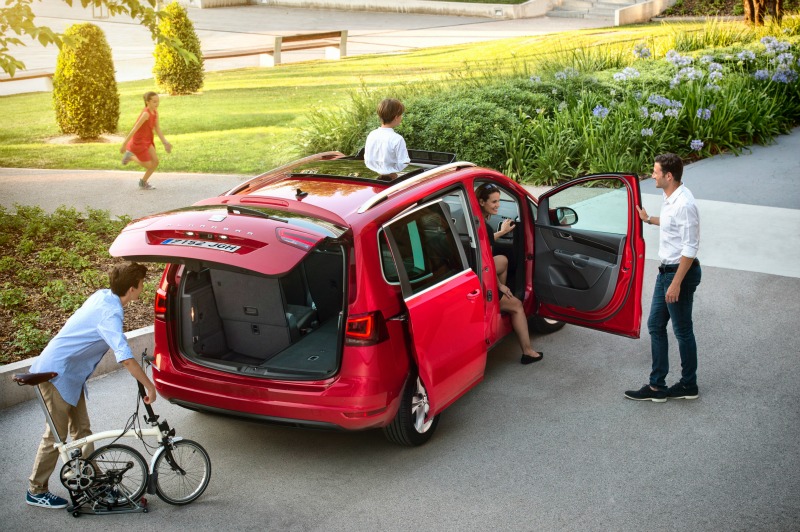 You can even – if you need to transport, say, an elephant, or Santa Claus (note contribution of children there) – fold down all the seats apart from the driver’s. Brilliant if you’re off ot IKEA. Only owning two small people, we tested out the size of the car to see if we could split the kids up effectively enough to prevent back seat sibling shenanigans. See how we got on in this short video:

Our car was an automatic, and as we drove home from our half marathon exploits in London, I remarked to Jason that the car has so much ‘poke’ that I can’t understand why anyone would bother with a clutch any more. You’d imagine that a car this big would take a while to get going, but not the Alhambra. I took off up the M1 with no effort at all, a hot bath for my aching legs on my mind. Actually, sometimes I think the only reason I run this event every year is for the excuse to wallow in a bath with a glass of wine totally guilt-free!

Tech-wise, I’m not the best person to ask; as long as I can charge my phone and get Radio 1 I’m happy, but Jason spent a while from the passenger seat fiddling with the dashboard and sat nav, and declared it very satisfactory. You can read more about the SEAT Alhambra technology here.

Honestly, I’m struggling to think of many, although I suppose if you did have a family of 7, including a baby who needed a buggy and a lot of equipment, you’d be pushed to fit them all in. But then that’s true of any car; you need a mini-bus. The sun-roof would prevent the addition of a roof-rack, but hey, there’s always a tow-bar!

I did, once or twice end up in a very small parking space, and the car is wide (to accommodate the 3 proper seats in the middle row), but SEAT have thought of that, and the automatic sliding doors mean getting in and out in a tight space isn’t a problem:

Overall, I’d be super-happy with the SEAT Alhambra as a family car, and I’d definitely consider it.

Christmas: a magical email from Santa