Our experiences with the Omnipod® Insulin Management System

The hardest thing I’ve ever done is sit with my child while she tried to come to terms with the worst news of her young life, at the age of nine. With hopefully the worst news she’ll ever have to face, because let’s face it, as far as bad news is concerned, type 1 diabetes is up there in the top half of the pile. A lifelong affliction whereby the medication you take will kill you if you take too much, and the dose varies every time you take it. That’s some big ask, especially of a child. Oh, and you take it by sticking a needle in your body up to 15 times a day, depending on your health, and what you decide to eat. Also your emotional state, stress levels, other medications, the weather, the altitude, whether there’s a Y in the day (I’m being flippant, but you get my point).

It took a long time for my daughter to get her head round all of that. I don’t think she’s fully on board with it even now, 5 years later, but like she says – What are you going to do? It’s do or die.

I have been paid for my time in writing about our experiences with the Omnipod® System. However, everything written here is our personal experience, and we receive all our medical supplies via our wonderful NHS clinic, like all diabetics. If you have questions about diabetes treatment, or the Omnipod® System, you should speak with your healthcare provider.

Is there a way to avoid insulin injections?

Now, my daughter is one brave cookie. She got to grips with the physical aspect of giving herself injections very quickly (although her dad couldn’t do it – we made him try once, and he cried. She had no sympathy, and has never let him live it down!) But I’ve seen many parents say that they’ve had to hold their child down and force the needles on them, which must be soul-destroying. In simplistic terms, having type 1 diabetes means that your body can’t make insulin. Without insulin, carbohydrate that turns to glucose in the bloodstream has no way of getting into the cells to provide energy, and blood glucose (BG) levels build up to the point where they’re toxic and acidic. Insulin lowers BG; glucose and carbohydrates (and a thousand other things) raise it.

As if this wasn’t hard enough to handle, there’s also the emotional burden. I recall one evening Maddie had gone to a bonfire night with Guides, and they’d handed out hot chocolate and Kit-Kats at the end. I arrived at pick-up time to find her in tears. “I had a hot chocolate, but I didn’t realise there were Kit-Kats until after I’d done my insulin injection, and now I can’t have one,” she told me. I asked her why she didn’t just do a second injection, and she replied that she’d had enough, didn’t want another one, it was Hobson’s choice. My heart broke a little bit more.

The simple answer is that no, there is no type 1 diabetes treatment without insulin, and there is no way to avoid injecting it. You can’t take a pill, because insulin is a protein that would be broken down by stomach acid before it reaches the bloodstream. However, there is a way to reduce the number of injections – often down to just one every three days – and that’s using an insulin pump to deliver the insulin. Ours is the Omnipod® System.

What does an insulin pump do?

When we got home that night I talked to my daughter about the possibility of her wearing an insulin pump. Instead of injecting every time she ate, we’d inject a cannula into her body every three days, and she could take insulin through that whenever she wanted. It would be much more flexible, and would allow her to dose more accurately for the food she was eating, without the hassle of setting up an insulin injection pen every time. It would also drip-feed background insulin into her body every few minutes, to keep her overnight blood sugar in a safe place (assuming we got the settings right – that’s a whole other blog post!) The catch was that most insulin pumps come with a tube attached; at one end is the cannula, and at the other would be the pump – about the size of a small phone. She’d wear that in a belt, pocket, or clipped onto her waistband.

There was absolutely no way. She wouldn’t even talk about it. She was adamant she was not wearing a device, especially one with a tube and a lumpy belt, on her body. She told me that in between injections she didn’t feel diabetic, and she could forget about what had happened to her. That wearing a pump would be a constant reminder that she was different. Not to mention how it would look in a bodycon dress!  And whilst I appreciated the benefits, I didn’t want to see it on her either. It made me want to cry. What we didn’t know at that point was just how different the Omnipod® System is.

How does the Omnipod® System work? 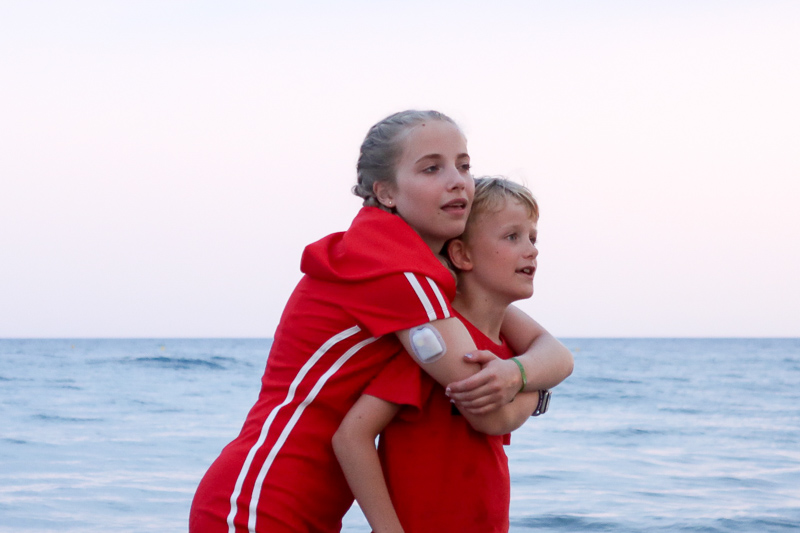 It took meeting someone else with an Omnipod® System to change her mind. We were at a meet-up with a local diabetes group (the best thing we’ve ever done, by the way – if you can find one in your area do it. You may not end up lifelong friends, although some do, but just to talk to someone who knows what you’re going through is like coming home.) Maddie noticed a girl around her age pushing some buttons on what looked like a nifty little mobile phone, or a pager of some sort. In fact, it was the Omnipod® System Personal Diabetes Manager (PDM) and she was giving herself the insulin for a slice of Battenburg cake. It took a few seconds – so did the inhalation of the cake. When we asked if we could see her pump, she casually lifted her top and showed us her Omnipod® System patch pump – about the size of half a boiled egg – stuck to her belly. No tubes, no belts or clips, and certainly no tubing flapping around her waist. Amongst all the other children and teenagers with pump belts, we hadn’t even noticed that this girl had a pump until she bolused (took an insulin dose) for her food.

Maddie was sold, and we began making arrangements for her NHS clinic to supply her with an Omnipod® System. As you can see from the picture above, the pump part of the device sticks to the wearer. There’s a cannula inside it, which auto-inserts when you give the PDM the injection command, then you’re set for 3 days, until it needs to be changed. You use the PDM handset (the green device in the top photo) to give instructions to the pump every time you want to increase or reduce background insulin, or to give a bolus injection. The communication happens wirelessly, so there’s no need to be attached to it, or indeed to carry it with you if you’re not planning a bolus. It’s way more sophisticated than pen injections, and most importantly for Maddie, much less hassle!

Using Omnipod® System and a Continuous Glucose Monitor (CGM) together 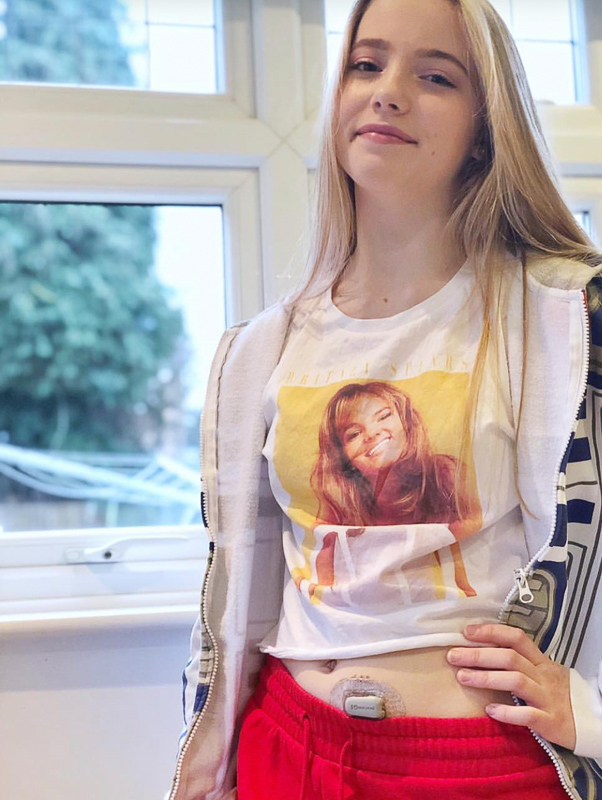 It wasn’t long afterwards that we learned of the benefits of a Continuous Glucose Monitor (CGM). Basically, a tiny sensor is inserted under the skin, attached to a clip-on transmitter, which emits approximate blood sugar readings every few minutes. For me, it’s a lifesaver. We set high and low alert levels beyond which an alarm sounds on her phone and mine. It means I can sleep at night unless there’s an alarm. If it hasn’t saved her life yet, it’s certainly saved my sanity more than once!

What’s great about using a CGM with the Omnipod® System is that over time we can see trends and patterns. The CGM data tells us if Maddie is having a high or a low at a specific time every day. We then use this data to change the settings of the pump to hopefully avoid those undesirable levels going forward. That’s not something you can do with injections. Once an injection is in, there’s not much you can do to change it, but with a pump, we can regularly tweak the levels of insulin being administered to cope with growth hormone, periods, extended activity or illness, or even a late night.

Why we’re sticking with the Omnipod® System 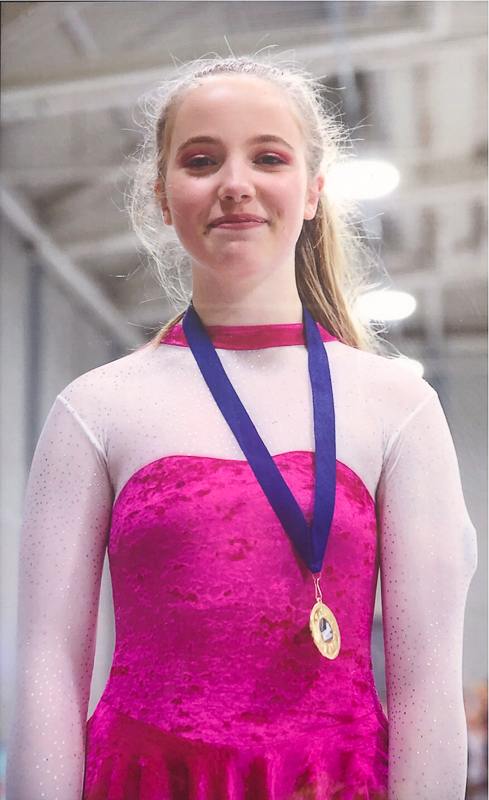 This is Maddie winning her group at ice-skating. One of the hardest things to navigate with diabetes is exercise, especially when it’s a sport you do quite intensively. Maddie can often spend 6 hours a week at the ice rink, sometimes in the early hours of the morning, sometimes in the evening. Her diabetes responds differently to exercise, depending on the time of day. In the mornings she needs a lot more insulin than usual; in the evenings, much, much less. Over time we’ve learned what works for her, and we now set temporary basal rates to cope with the exercise. It’s brilliant, especially for a teenage girl who doesn’t want to eat sugar just so she can skate.

I’d be lying though if I said that the best reason for Maddie to use the Omnipod® System (apart from the bodycon dresses) that we’ve found isn’t the snacking. Of COURSE it is! Maddie has reached an age where she’s rarely at home. She’s usually at someone’s house eating whatever it is they’re having for dinner, sometimes a takeaway pizza (hell for a diabetic on injections) or occasionally at Greggs downing sausage rolls. And she’s a massive fan of a Starbucks latte. All things I was terrified at diagnosis could never happen again. I will not claim any of it is easy; but pushing a few buttons to alter how her insulin dosage copes with a Doritos/Oreos/Popcorn/KFC sleepover binge is SO much less stressful (and less scary for mum) than leaving Maddie to try and figure out complicated dosing with injections away from home. And doing all of that without tubes or bulk has been a really positive experience for Maddie.

This testimonial relates to an account of an individual’s response to treatment with the Omnipod® System, user experience may vary, please speak with your healthcare professional.

The two-part Omnipod® System includes the Personal Diabetes Manager (PDM) and a tubeless, waterproof1 insulin pump (Pod) that helps to simplify the management of insulin-dependent diabetes. The small, waterproof1 Pod and the hand-held PDM communicate wirelessly2 to deliver continuous insulin3 based on your personal settings. For more information, and to order a demo kit4, visit the Omnipod website.

The Secret to Raising Confident Teenagers