What’s the right age for children to have pocket money? If it were down to me I’d have been spending an allowance from day dot, but I was probably 5 when I got my first ever Pocket Money. Me and the Bug get £2 each on a Saturday. £1 goes into our Piggy Bank for spending on random tat and stuff we want that we’re not allowed.*

The other £1 gets swallowed by another money box to which we are not allowed access. Mummy claims that when it is full, she puts it into an ISA in our name. The idea is that when we want to buy a car or a flat one day, there will be money for a deposit. In truth I suspect she spends it all on shoes…

Anyway, the Bug and I have opposing views on saving. I save my money religiously, counting it nightly, until the next time there is a remote possibility of being close to a shop. Then I spend it all. On whatever I see that I can afford. I have been known to ask shop staff if there is anything in their shop for 32 pence, as that is what I have left. There are no cobwebs in my purse!

The Bug, meanwhile, has no idea how much money is in his Darth Vader money box. He’s not interested. He knows he is not yet up to the £304.99 he needs, and so counting it would only lead to disappointment. You see, he’s saving for the Death Star… 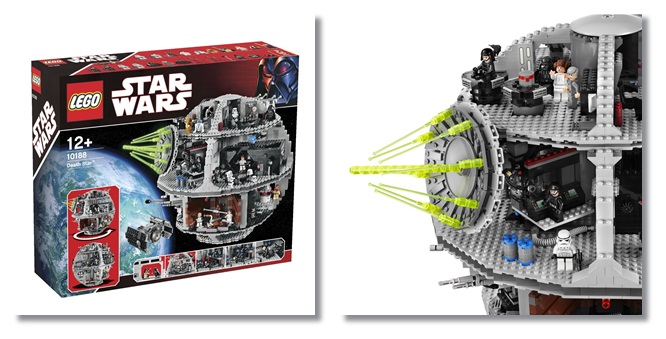 In the meantime, he contents himself with counting his LEGO pieces, and making creative Light Saber designs for the new Star Wars Disney film! I’m linking this post to Little Builders at Mummy Mummy Mum! One day we can hopefully link our Death Star up there too 😉

What to do on a sunny day…

21 thoughts on “I’m saving my pocket money: Wot so Funee?”