Diabetes: Is the Artificial Pancreas a Diabetes Cure?

I’ve lost count of how many times I’ve been told that my daughter’s condition will soon be cured. It seems every day that a new headline lands in the consciousness of my friends, reassuring them that a cure for diabetes is imminent. Some even intimate that I can get it from her GP right now. She recently transitioned to insulin-pump therapy, and so we no longer have to think about diabetes. So say all her Grandma’s friends.

Of course, the reality is in stark contrast to public perception, and she and I both welcome opportunities to change her pump site in public, because it sparks the conversations which allow us to educate. Eyes open wider as friends realise what a burden it is to wear an insulin pump; cheery voices quieten as we explain why round the clock finger pricks and vigilance are the only way to make sure her pump operates safely; that really, a pump is just a more technical and (for some) less irritating way to control blood sugars, not a device which ever enables us to forget.

The Artificial Pancreas: a diabetes cure?

So it is with the Artificial Pancreas. I, like many other hopefuls, watch the development of this ‘closed-loop’ system with excitement, knowing it is the most advanced diabetes management tool yet. But it isn’t a cure. It isn’t freedom from diabetes. Cambridge university recently published an article commenting on a study in which patients with Type 1 diabetes took part in a three-month trial of an artificial pancreas system. The claim was that the technology was “edging closer to perfection,” with the smartphone-style device being worn for a full 12 weeks (or a school term, in the case of children in the study), to help control blood glucose levels.

The principal goal of the system is to reduce episodes of hypogylcaemia, which occur when a patient has too much insulin in their blood, dropping their blood glucose to potentially dangerous levels. Patients with ‘hypo’ unawareness may not notice the symptoms of a low blood sugar in time to treat it, and may benefit from the automated features of the device, which turns off insulin delivery once blood glucose drops below a pre-determined level. The system also aims to prevent low blood glucose levels overnight, when may patients (including my daughter) are less aware of drops during sleep. 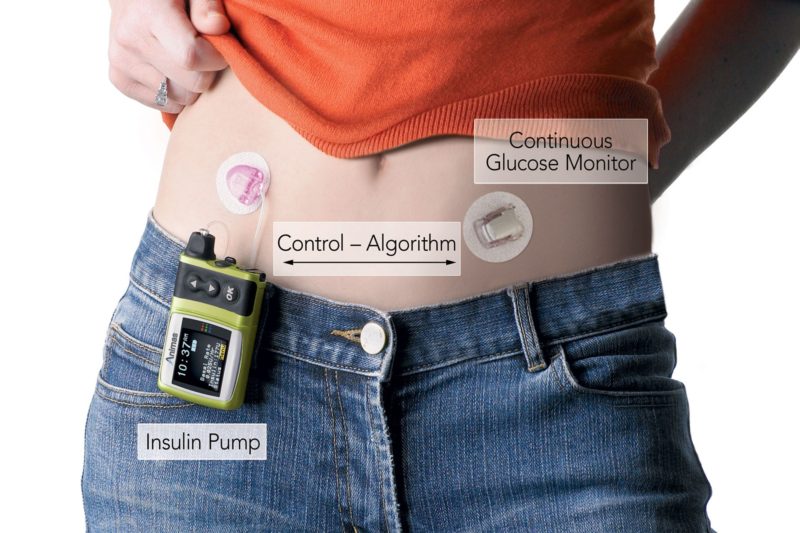 The main psychological benefit of the artificial pancreas is the reduction in time and mental effort required to keep blood sugars in a near normal range. It consists of an insulin pump which delivers insulin via a cannula inserted under the skin, and a glucose sensor which continuously registers the glucose in the interstitial fluid (the fluid surrounding the blood cells). The devices are linked, with information from the subcutaneous sensor being delivered to the insulin pump round the clock. The clever part comes in an algorithm programmed into the system which allows insulin to be continuously decreased or increased in response to the blood glucose numbers it receives.

Not only would this system lessen episodes of hypoglycaemia, it should also detect and correct blood glucose levels which are too high, preventing levels that over time lead to serious complications in the diabetic patient. Presumably it would also eliminate instances of diabetic ketoacidosis (DKA, when blood sugar levels skyrocket) which needs urgent hospital treatment, and leads to death if left untreated.

So the benefits of the artificial pancreas are significant, especially by comparison to the quantity of finger pricks and insulin dosing decisions that have to be made over the course of a normal day. Quality of life is difficult to sustain for most patients with type 1 diabetes, as they find themselves tied down by medical tasks several times a day. If you ask my daughter what she’d most look forward to in a cure, she’ll tell you it’s the carb counting. Every single carbohydrate she consumes has to be dosed for with insulin, and the more accurate she is, the better the resulting blood glucose levels. This means weighing food wherever possible (and yes we’ve weighed chips in restaurants), calculating the volume of a glass of milkshake before drinking it, and never grazing – party food goes on a plate, is measured and calculated, and woe betide anyone who pinches one of her sausage rolls post-calculation! It’s no way to live.

But is it a diabetes cure? No. Is it freedom from diabetes? No again. Insulin pumps and sensors have to be inserted under the skin, and changed every few days. Skin prep and ongoing hygiene is essential to maintaining the accuracy of the devices. Think of it as wearing a small stoma bag – it’s not nice. A long soak in the bath is really rather a luxury, as sensors and adhesive dressings become loose from bubble baths and time in the water. Glucose sensor accuracy is variable, so dosing decisions are made on estimated levels rather than realtime blood glucose. Edging closer to perfection it may be, but is perfection ever really going to be a realistic goal?

Would I take it? You’re damn right I would. The world of diabetes technology is moving faster than ever, and while the artificial pancreas may not actually be an artificial pancreas, it is a device which will make managing diabetes much less burdensome than it is at the moment.

Would I trust it with my daughter’s life, and sleep eight hours a night? Not a chance.

10 Tips for Cutting Costs as a Family #SaveSmarter

Could you give up something you love to save money?

6 thoughts on “Diabetes: Is the Artificial Pancreas a Diabetes Cure?”