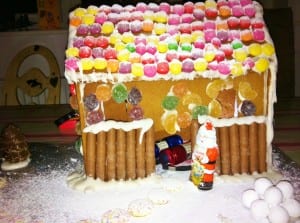 Boxing Day is traditionally when the Actually Mummy household break into our gingerbread house. Lovingly crafted sometime during December, it takes pride of place on Mummy’s counter, suffering mini-burglaries, and minor structural damage until Boxing Day, when we are officially allowed to demolish it, and demolish it we do! 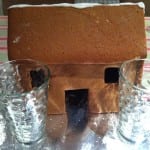 Our gingerbread recipe comes from BBC Good Food, complete with template. It makes perfect gingerbread: firm enough to cope with the house structure and onslaught of decorating by young children; not so hard it breaks your teeth when you try to eat it!

Use a template to lay on the rolled-out dough and cut walls and roof panels. We had one from Mummy doesn’t know where, but we have doctored it over the years with doors and windows. Once baked you need to trim the edges to make them straight for ‘glueing’. Daddy found a template for a Mini Cooper, which Mummy felt compelled to try. More on that later….

Next you glue the house together. For this you need icing made of icing sugar and egg whites – use 2 egg whites and beat in icing sugar until you have a stiff, but still pipeable paste. Pipe it around the edges and join the walls together. Use plenty – any excess will double as snow. You will need to prop up walls and roof until the icing dries hard – we used lots of upside-down glasses. More icing can be piped or pasted over the roof and walls so you can decorate. 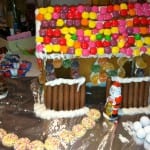 Which is really the whole point. Decorating is a matter of personal taste. Mummy’s first house was a masterpiece notable for its lack of child involvement. The following year we were allowed a roof panel each. This year I think she gave up under pester pressure and left it to us to complete at will. I used Tutti Frutti’s as roof tiles and Skittles to make a chain of coloured lights. The Bug’s side was a little more sparse, and a little more ‘random’. Mummy finished it off with chocolate fingers for the log cabin effect, and white chocolate jazzies to make a path to the Aero Christmas tree! 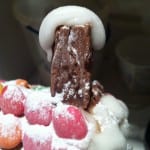 A Lindt mini-Santa stands by the door with a pile of Cadbury Snowbites, for snowball fun later on! Dip half a chocolate flake in hot water and fix to the roof for a chimney. The other half should be eaten, along with the 17 sneaked skittles that ‘accidentally’ fell onto the floor 😉

Finally, Mummy used a sieve to ‘snow’ icing sugar onto the house: 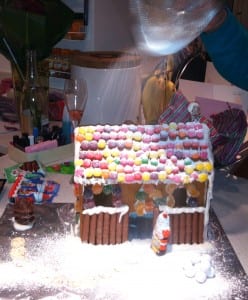 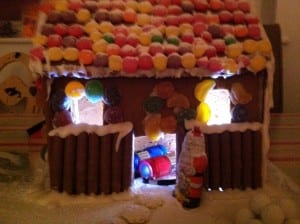 Last year Mummy decided that Santa needed a welcoming fire, and lit a tea-light in the house. It looked perfect. Until the house melted and collapsed! This year we tried torches instead. We gazed adoringly at our Gingerbread house for days, thieving occasional sweet bites, wiping fingers in the snow, before we were finally allowed to use the wrecking-ball of our appetites to being the demolition process. 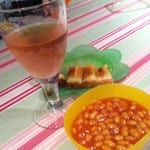 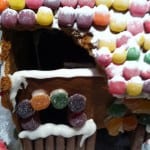 We had a great Boxing day tea of beans and toast (not on – that’s just gross), with a glass of wine, just like the grown-ups. Now before you call social services, the Bug’s ‘red wine’ was Ribena, and my rosé ‘prosecco’ was actually Schloer, but we felt very grand. And the icing on the cake (or rather, house) was choosing a piece of roof for pudding!

Oh, and about that Gingerbread Mini Cooper? It was a bit of a car crash, really: 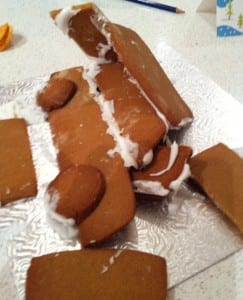