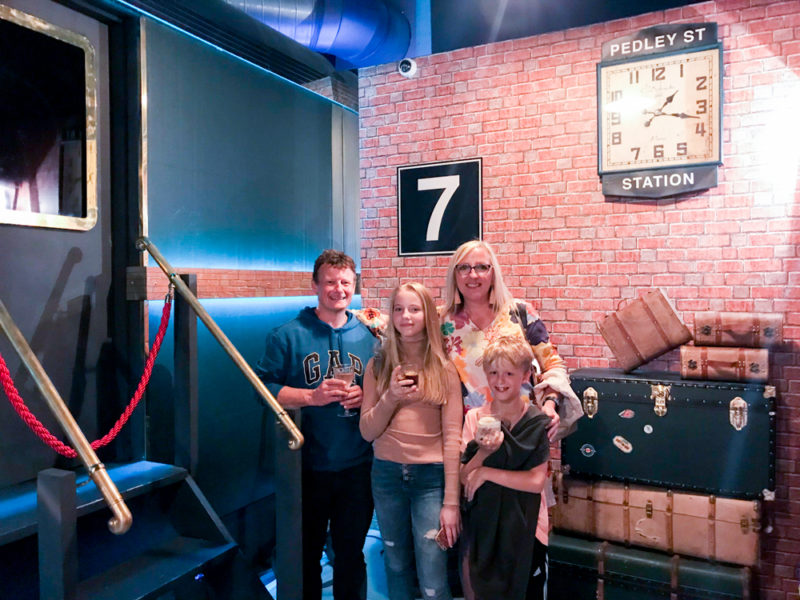 If you’ve ever been to a murder mystery dinner party you’ll be able to imagine exactly the kind of scene-setting I’m about to describe. But have you ever taken part in an immersive theatre murder mystery experience with your children? I’ll admit I wasn’t sure exactly how this would go myself, but when I heard about Pedley Street station in London, I knew we had to give it a go. If you’ve never heard of immersive theatre, it’s pretty much what you’d imagine – a play where you’re immersed in the plot. The actors will engage with you, bounce off you, and make you part of the show. As such you do need a bit of bravado, but it’s hilarious, and  I’d advise anyone to try it at least once.

Before I go on, I feel I must mention that this is an experience for older children. We once took Evan to an interactive version of Fawlty Towers (think rude restauranteur and much bun-throwing – rib-achingly funny, but probably not for a 7 year old!) With the kids now at 11 and 13, we know they’re capable of engaging, and of eating a three-course adult-oriented meal, so we thought it was worth a try. They surprised us by not only enjoying the food, but by actually making their own quips with the actors. 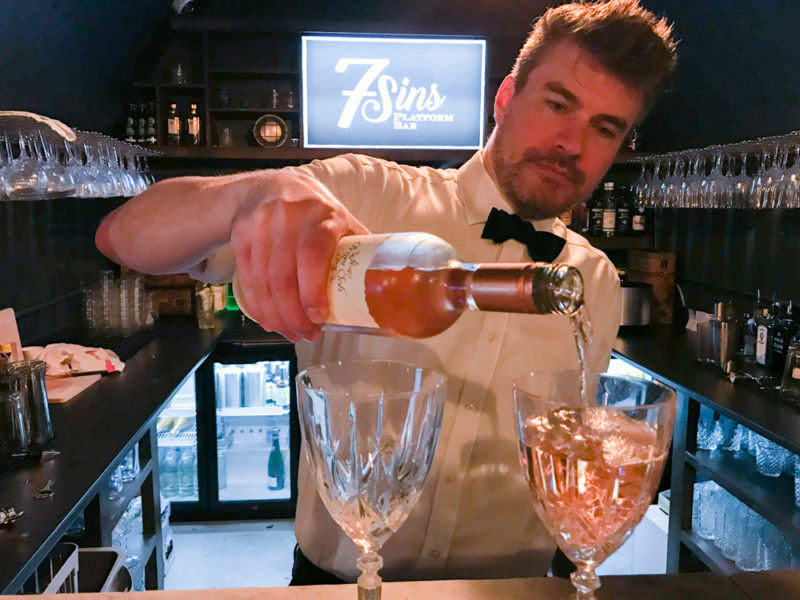 When you arrive at Pedley Street station it might feel a little odd. Firstly, it’s not an actual station, but an archway under the original rail track that has been converted into a theatre venue. You’ll be greeted, and sent through to the Seven Sins bar, where Old-Fashioned cocktails are served in old-fashioned glasses. The ‘train’ awaits for boarding, but as you mingle with fellow passengers, you’ll be joined by a few who aren’t backwards in coming forwards. A cockney bloke was first to rock up, selling a variety of knock-off goods, all against the backdrop of patter on his bitter divorce. 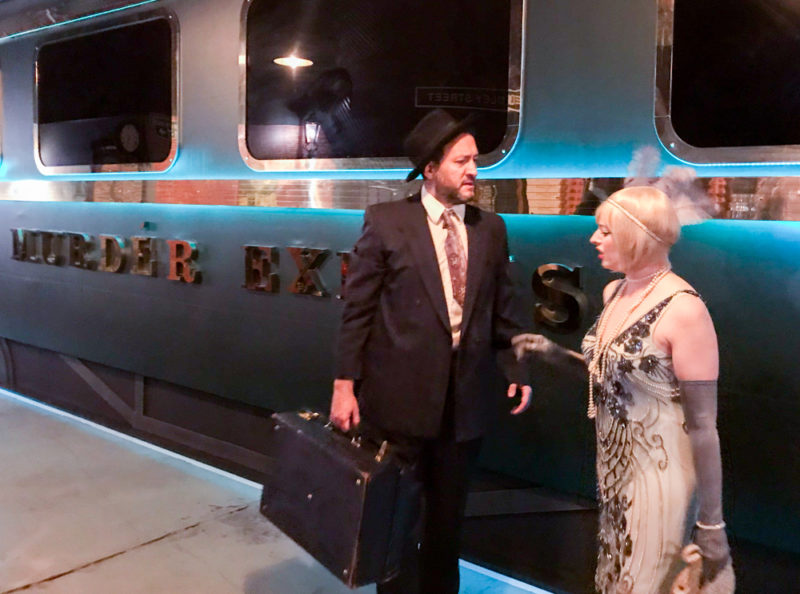 Once the introductions are made, you’ll board the train (in reality a prefab stage set, but with surprisingly comfortable booths for up to 6 guests each). The conductor settles you in, and a slightly crazed young man professes to be your waiter. As a waiter his skills are basic, but what he lacks in decorum, he makes up for in slightly off-colour (adjusted for audience age apparently) hints and suggestions about your fellow guests. 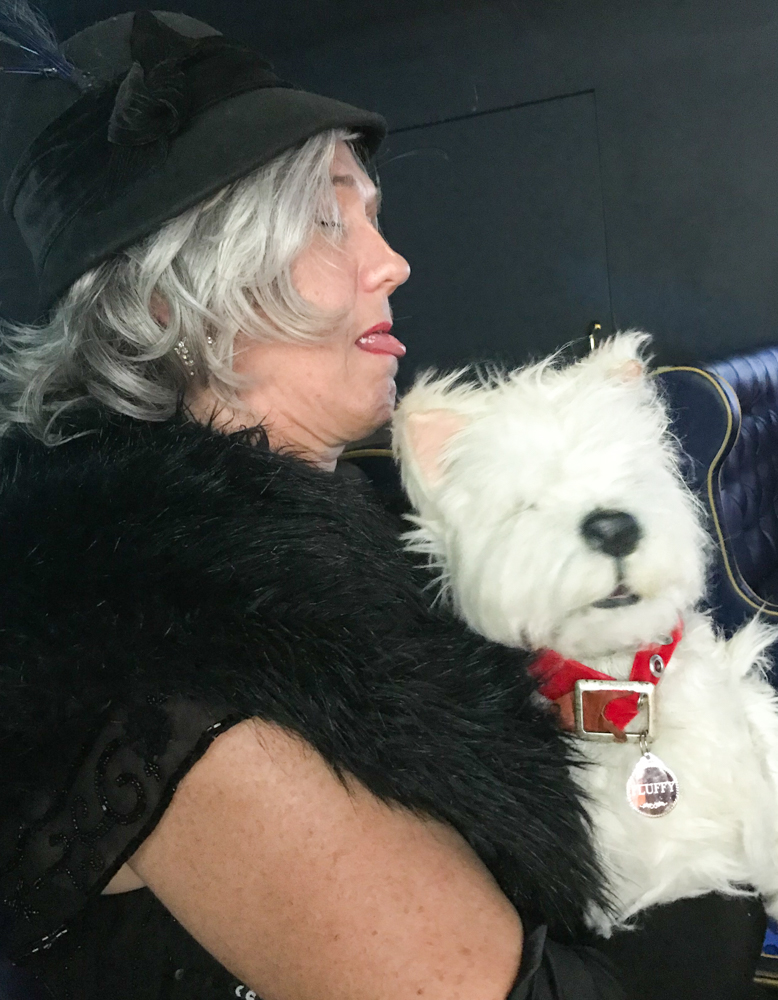 You’re likely to be joined throughout the course of your meal by one or more of the actors, who claim to be fellow passengers. Our first visit came from a lady with a puppy rather like our own, which made for some interesting ad-lib conversation. She told us all about her 5 dead husbands, before settling into this pose, setting the cast off on the suspicion of murder. (I was asked to poke her. She wasn’t dead. I nearly spat my soup out)! 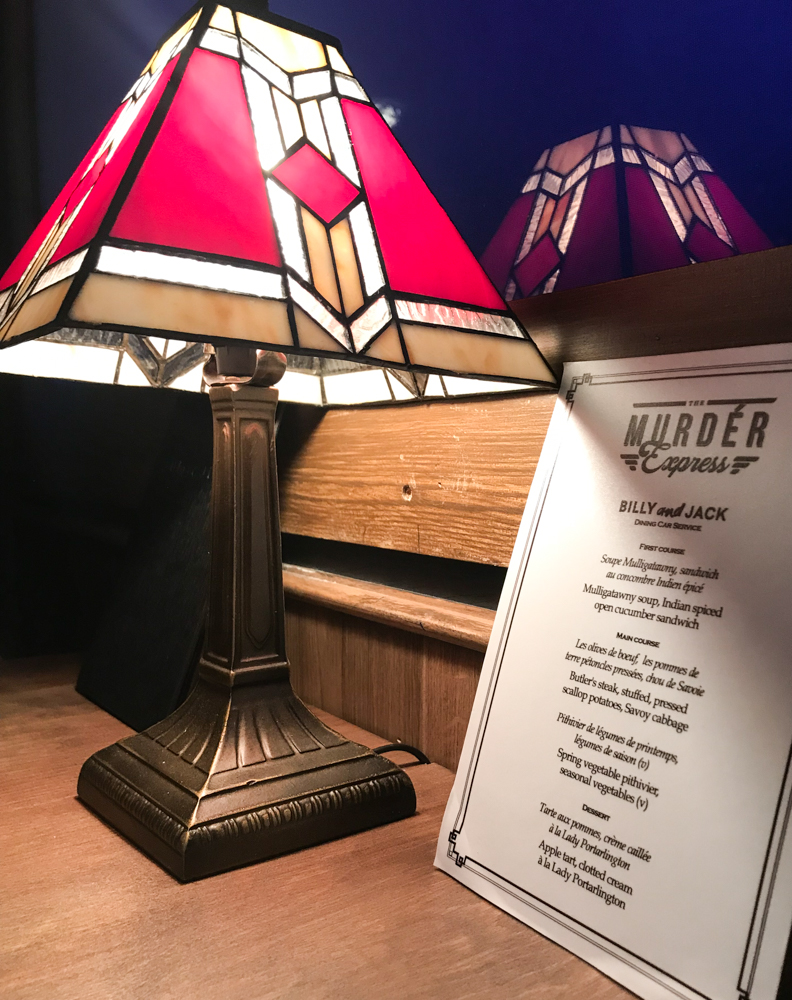 Speaking of soup, the menu – created by Billy and Jack, of Masterchef fame – was delicious, hearty, and appealing to all ages. Themed to a 1920’s style, but without enormous challenge, I’d challenge most children not to enjoy enough of it to satisfy their appetites. The Mulligatawny soup was tasty, and not too spicy, but had enough of a twist to please adult diners; the main course of dauphinose potatoes, beef, and cabbage was dressed up enough to be worthy of any smart restaurant, but recognisable enough not to phase my teen and tween; and the dessert was perfect – apple based, with caramel and ice cream. What more could you need? 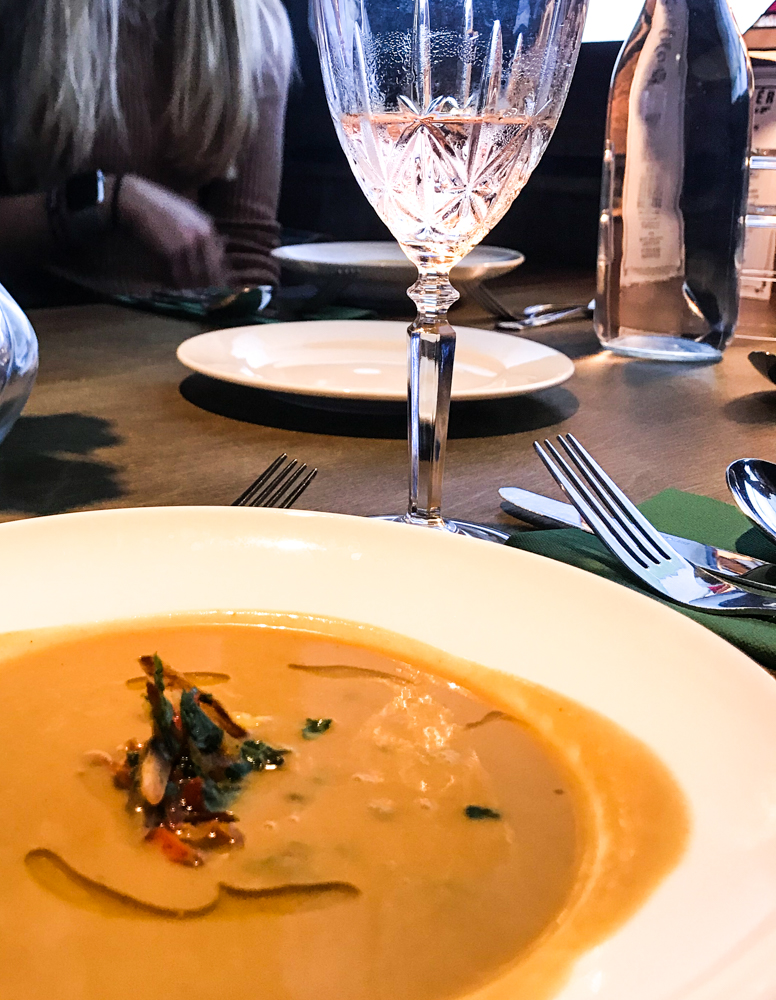 Real waiters were in charge of food delivery, thank goodness, so there was no repeat of the Basil Fawlty service method that so unnerved my 7 year old the last time we ventured into immersive theatre. We were largely left to our own devices while we ate, but between courses was where the action kicked in. I’ll say no more than this: there were plot twists galore, drama and intrigue to keep you guessing, and hidden secrets I can’t tell you about, in case I spoil the fun! All in all, the Pedley Street station murder mystery was a really fun 2 hours of entertainment, complete with a top quality Sunday lunch. (I’m told that the Friday night version is a little more feisty, so if you are taking the kids, opt for a weekend lunchtime! If not – enjoy, and report back please!)

And if you’re dedicated fans of immersive theatre, our teenagers loved this War of the Worlds virtual reality experience. 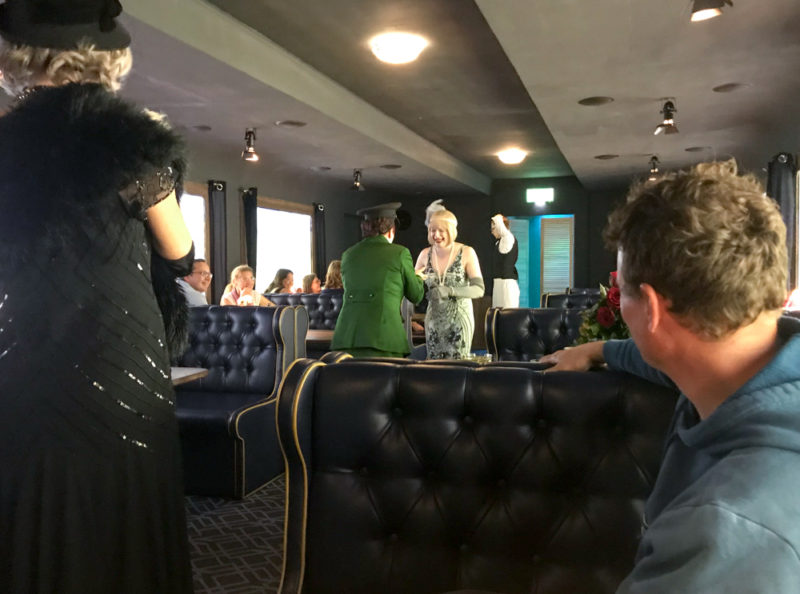 Disclosure: our tickets to the Pedley Street Station Murder Express show were complimentary for the purpose of review. All images and opinion is our own. I’m not being paid to write this post, and I would wholeheartedly recommend it for older families and adults. Visit Funicular Productions for more information, to buy tickets, and to see what shows are coming next. We’ll definitely be going back! 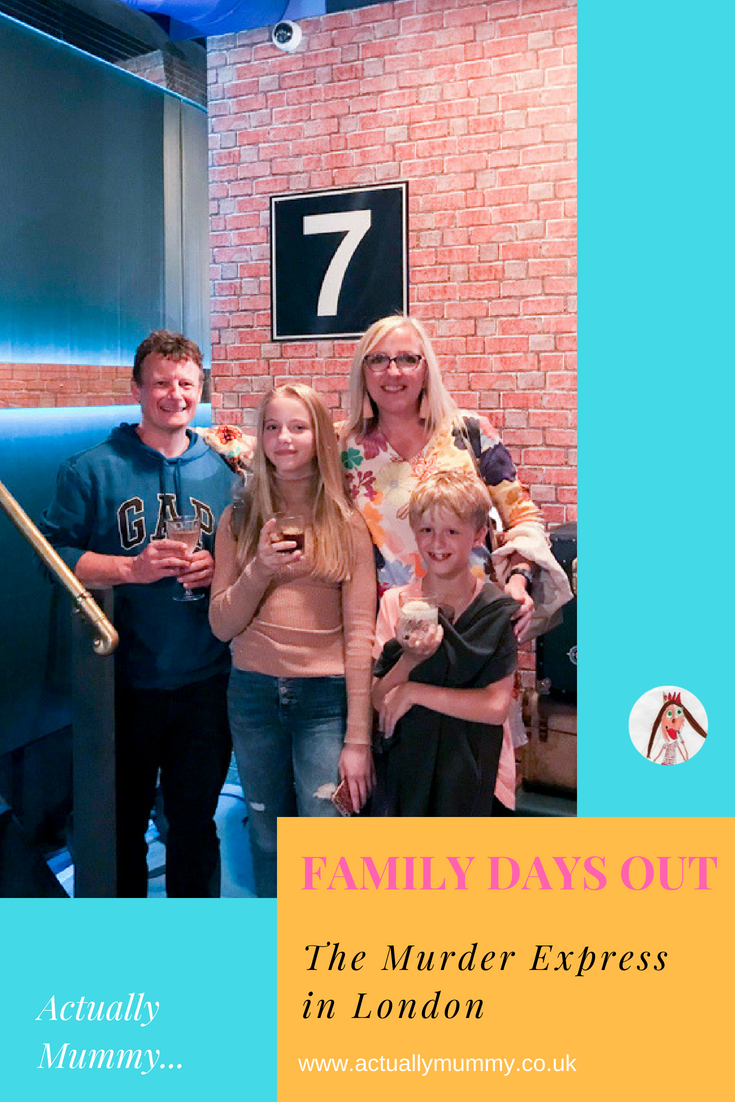