What a Nightmare! Top tip for dealing with bad dreams

Last night I had a nightmare. I was in the final of Strictly Come Dancing (yes, of course I’m that good). For some reason we had drawn the short straw and instead of being in a glitzy ballroom we were in the school hall. Not only that, but the head judge was a sorcerer, whose modus operandi was to throw dirt in the loser’s face.

Now, 6 years of experience has taught me that the waking up of Mummy is only to be tackled after much consideration. So when I awoke, sweaty and indignant at the injustice of my subconscious ballroom failure, I weighed up the pros and cons and decided that yes, I would share my bad dreams with her. She allowed me the usual 10-minute snuggle and then sent me back to my own bed.

At that point I remembered why I don’t usually bother. I am well aware that several of my friends still run rings around their parents in the night-time antics department (and nightmares provide especially powerful leverage). No such luck with my Mum. Sleep – mine and hers – is her non-negotiable topic: you get enough, or you’re a pain the next day (and believe me, she really is)! I once spent 20 minutes in the middle of the night stomping around the house, railing against the fact that M&D had someone to cuddle all night, whilst I had to sleep alone. I even threatened to go into my baby brother’s room and wake him up. She didn’t bat an eyelid, just ignored me until I was too tired to be bothered any more and went back to bed. She claims it will stand me in good stead when I have my own kids. Little does she know if they behave like that I’m planning to get her round to babysit – that’ll teach her!

Mummy has a format for the avoidance of bad dreams. Whenever I go through a bad patch, she tells me that dreams are in my head and that I’m in charge of them. So whatever I dream about, I have to come up with a way to put myself back in control. For example, if I were being held captive by scary pirates, I would throw a pot of glue in their faces, followed by a bag of pink feathers. Blinded, and looking ridiculous, they would proceed to scarper all over the ship, tripping over the obstacles I put in their way. Eventually they would fall overboard leaving me alone on a ship full of cakes. Having agreed on this scenario, we then made a picture of it (funnily enough we had pink feathers in the sticking box – clever Mummy!). That dream never bothered me again.

So this morning I duly reported on my alternative version of the Strictly nightmare, wherein I switched the dirt for pink sweets. Much better result! Mummy then informed me that the Bug had also been up with bad dreams – something about a dog chasing him and trying to eat his spiderman top. I immediately got working on a solution for him, which I thought was pretty impressive. To make it better, we would wrap sellotape around the dog’s snout, and put a pink collar and a salsa dress on him (keeping to the theme of my own nocturnal adventure).

It turns out that Mummy, in her pre-dawn stupor, had mis-heard, and his assailant had actually been ‘a black hole inside a yellow thingy’. Well, terrifying though that may be, it made no sense whatsoever to me, so I tried to convince him that a dog in a salsa dress would be much easier to deal with. The Bug was quite insistent that it was a black hole, and nothing would persuade him otherwise. Disappointed that my dog-in-a-dance-dress masterpiece would never see the light of day, I took myself off to complain to Daddy. He too thought it would be unreasonable to manipulate the Bug’s reverie just to suit my own creative yearnings. What’s a novice dream therapist to do? It took a chocolate scone for breakfast before my lightbulb moment materialised. We would stuff the hole full of candy floss. Pink, of course. 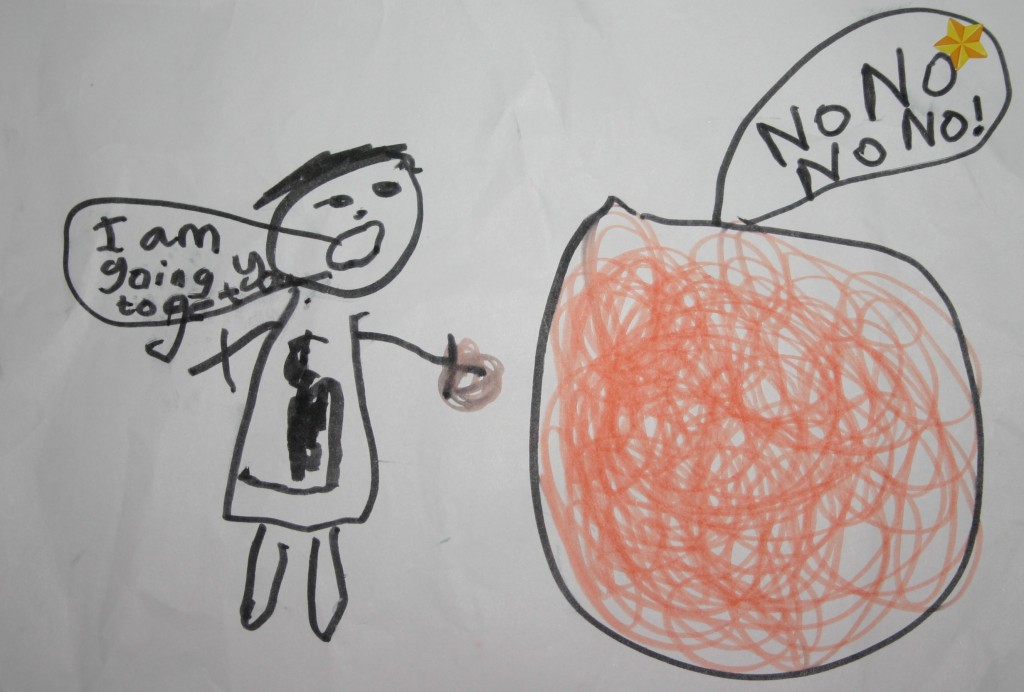 Bad dreams are easily solved with a little pink