Travel: an Incredible Day aboard the Thames Clippers 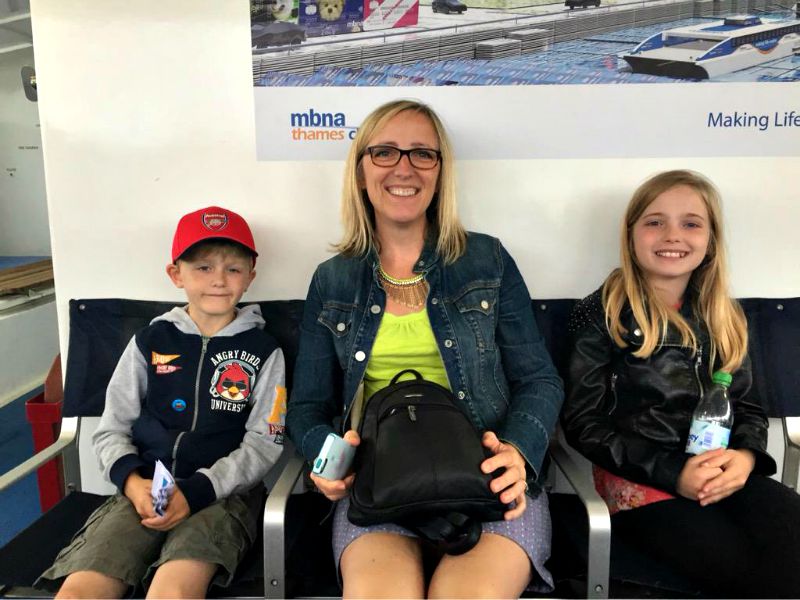 Yesterday we spent the day on the river Thames. I say we spent the day; in actual fact we spent just two 30 minute trips on the Thames, and filled the rest of our time on its banks, enjoying some of the things that – despite living a 20 minute train ride away from the Capital – we’ve never bothered to do before. It was such a fun day, that we will definitely be going back.

We were invited as guests of MBNA Thames Clippers, to experience their fleet of boats that transport both tourists and commuters across London. With thirteen high-speed catamarans, they have become a key part of London’s transport infrastructure, carrying 3.8 million passengers in 2014. I’d always assumed they were a tour boat, and a large part of their 150-seater capacity is occupied by those wanting to see the sights, but stretching from The O2 to Putney, they also form a very convenient – and fast – part of the commuter transport network. Our host, Stacey told us how she travels home on a Friday evening, complete with gin and tonic from the on-board bar to get her weekend started. Imagine that for a commute! 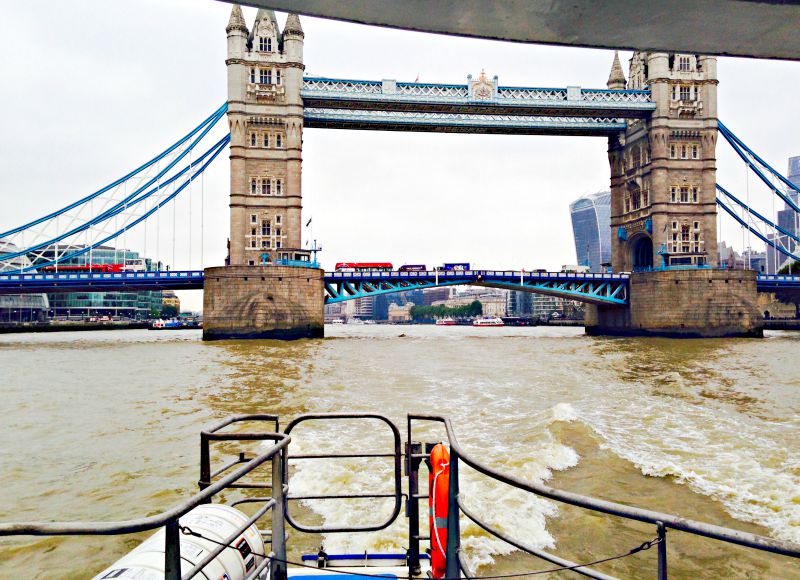 A particularly grey and windy day allowed us to see exactly why the Thames is way more treacherous than you might think. The tidal waters were churned up, and we could see the currents swirling. But that’s no problem for the Clippers, which are designed to cut through the water at high speed using minimal power. Once out of the iconic stretch of sights, the announcement came that speed was about to be used, and we shot through the wider parts of the Thames to The O2. It was exhilarating! 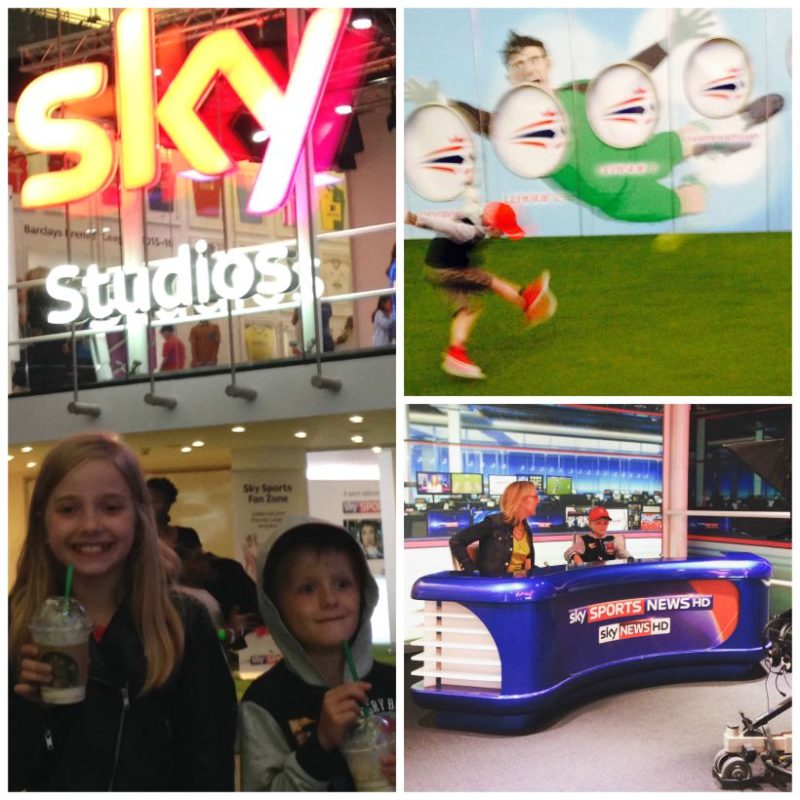 We have visited The O2 many times for concerts. Being so close to London, I’m constantly reminding our kids how lucky they are to have access to big events, and the amazing restaurants at the venue really do make it a special day out. But we’ve never stopped to check out the other activities on offer under the dome. We spent a good hour at the Sky Studios, where the Bug got to practice his goal skills, we learned some of the history of Premiership football, posed with the stars, and even had a chance to read the news from an autocue. 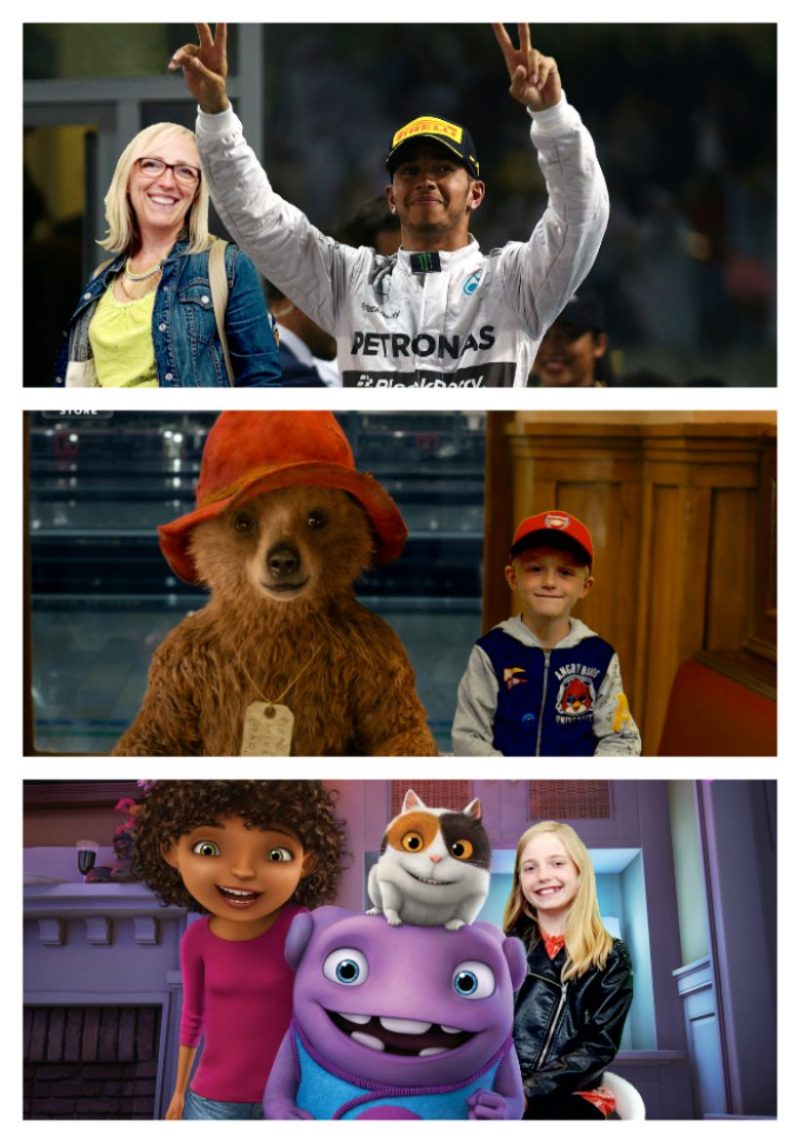 We were also lucky enough to be given a backstage tour of The O2 Arena. It was fascinating to see The O2 empty, and being set up for the next performance. Made us feel quite tiny. We got to take selfies where the stars do, at The O2’s backstage Twitter mirror, strolled through the dressing room last used by Taylor Swift, and discovered the secret ‘Fab Room’ used by the stars for get-togethers after their performances. No photos though – it’s a secret, isn’t it..?! 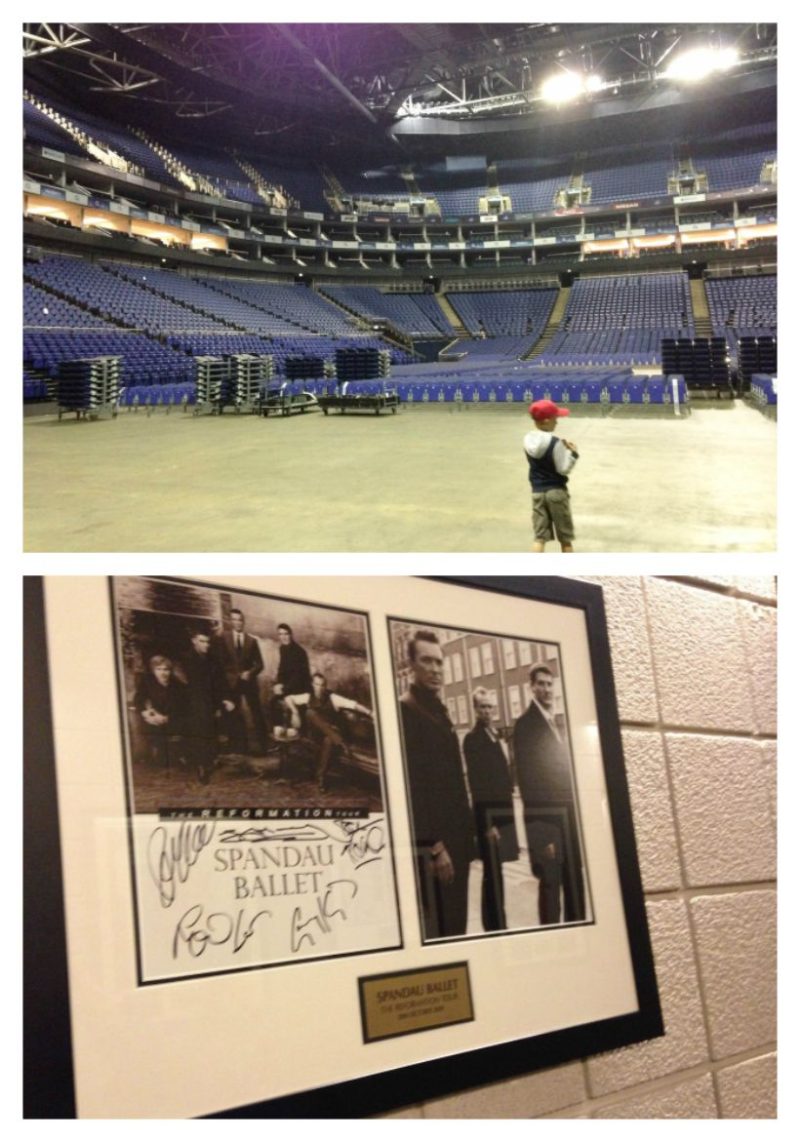 Next up was lunch at Five Guys. Now, we have dined at The O2 several times – as well as all the usual favourites, there’s possibly the best steak in the world – according to GG – at Gaucho’s. She recommends the spiral-cut chorizo steak marinaded in garlic and parsley. But even steak won’t keep us from making Five Guys our new regular haunt. Is it the gorgeous burger, with the bacon that is actually crispy? No. Is it the salty chips that are perfectly fried and just a bit more crunchy than your average packet of fries? Not even. It’s this: 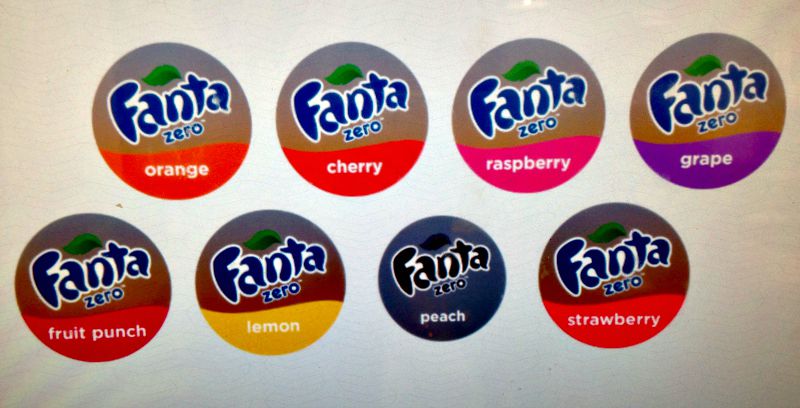 We have never seen so many flavours of fizzy drink, and they’re all available from a self-service machine. I didn’t even know there was a raspberry Fanta, never mind a zero sugar version! Having type 1 diabetes is a pain for lots of reasons, but sugary drinks is one thing GG just cannot have if she wants to stay healthy. And that includes juice. Everywhere we go there are sugary drinks, and we used to allow a lemonade in restaurants. The deal was, if there was wine on the table, there was soda too. It seemed only fair. But no Coke. Coke for kids is bad, right? When diabetes came to stay, lemonade was off the table, and so we conceded on the Coke, it being the only diet option available in most restaurants. After a while though, Coke gets boring, and it often seems unfair that everyone else can have a nice drink with their meal, while she has to stick to water. We love you Five Guys – we’ll see you again, and again.

After lunch we headed over to the Nissan Innovation Station, where the kids were totally engrossed in learning about the mechanics of not only the glossy cars, but also some of the kit used in the Paralympics. GG got a workout on the wheelchair race track, while the Bug took on Silverstone and the streets of London. 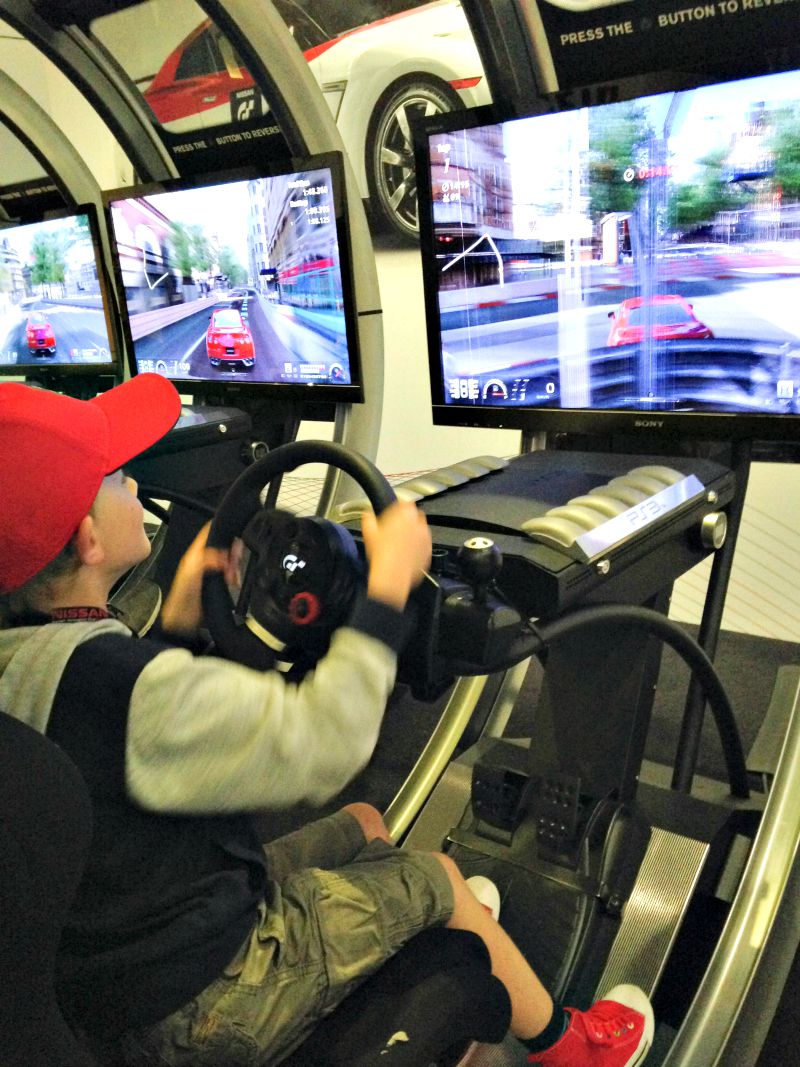 As we prepared to leave The O2 the thunder rumbled over the canvas. This was a signal for the Emirates Air Line to be closed, otherwise we would have been travelling across the Thames via cable car – another popular choice amongst east London commuters. You can see Alison’s experience of this here, and we will definitely be taking a ride when we return, using the Thames Clippers as a convenient way to see some of the sights of London. 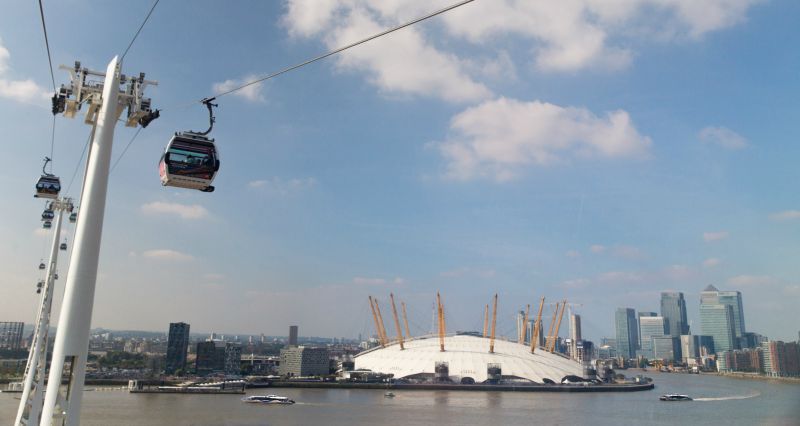 We also really want to spend the day at Greenwich, and the Clippers are a brilliant way to get there. Here’s a checklist of all the things we need to do at the O2 next time we visit, and that you might like to try yourselves:

A one-day River Roamer family ticket for the Thames Clippers costs £32.50 and allows you to hop on and off the boats at all the different attractions along the river. Our ticket and activities were free of charge, in return for this review. We had a brilliant day. All opinion and editorial is our own. Images may not be copied without our permission.

Parenting: The truth about diabetes

7 thoughts on “Travel: an Incredible Day aboard the Thames Clippers”