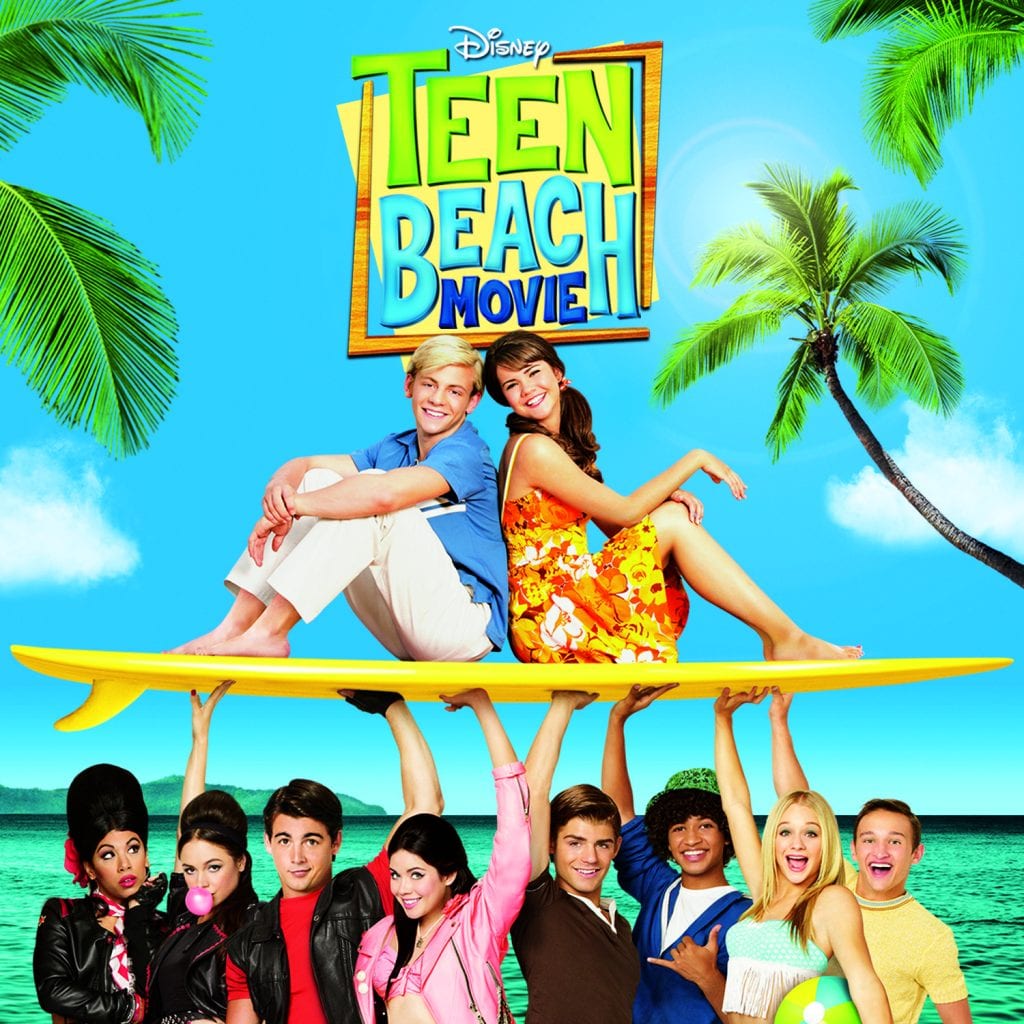 We’ve listened to the soundtrack, and it’s kind of catchy, in a weird sixties/Doris Day kicks ass way, but without knowing the context, it’s hard to figure out why. So Friday evening saw us, popcorn in bowl, huddled on the sofa, glued to the Disney channel, for the premiere of Teen Beach Movie. Instantly I was hooked. Sweet girl, blonde boy, doomed romance as the long summer draws to an end; it’s a winner in any young girl’s book.

What is Teen Beach Movie all about?

Kind of surfer chick meets HSM Cliff Richard style, the movie sees McKenzie and Brady splitting up to go off and grow up, after years of carefree hanging out on the beach. *Sighs*. But not before one last surf. And OMG, a catastrophe awaits! Falling prey to the “best wave ever”  Mack (sweet girl, but now we discover, a bit feisty – reminds me of someone) gets swept up in a storm. Boyfriend Brady rushes to her rescue *swoons* and the two of them succumb to the waves. *Holds breath worriedly.*

Plausibly (to an 8 year old), when they resurface (*thanks the God of popcorn and pick ‘n mix*) they find they’ve travelled through time to the set of Brady’s favourite sixties movie set Wet Side Story. *Casts irritated look at Mummy’s stifled giggles.* “But it’s been done before!” Mummy starts harping on about some prehistoric film called Back to the Future. I silence her with my best glare, and focus on the travesty of Mack and Brady unwittingly getting in the way of Wet Side Story’s lead romance.

The pair caper through the plot, erupting into song at the key moments, whilst they attempt to create harmony between the feuding Bikers and Surfers, and ensure their lead counterparts fall in love as they are supposed to. Add to that a couple of evil but bumbling scientists planning to change the weather systems and take over the world, and you have the perfect summer film for 6-12 year olds. Even the Bug enjoyed it, and he’s a boy! *Grimaces.*

With a score by High School Musical’s David Lawrence, it’s easy to see why I would spend the entirety of the following day singing the numbers outside my brother’s window to make sure he’s got the lyrics nailed. The CD has been firmly jammed into the Mini-Cooper’s music system, and residents of my town will be treated to my rendition of “I know what boys like, boys like girls like me,” for the remainder of the summer holidays. Lucky folk 😉

I’ve also just spotted this video of the students from Stagecoach staging a flashmob with Kristina Rihanoff (of Strictly Come Dancing). In honour of – wait for it – LEGO Friend’s partnership with Teen Beach Movie. So now I also know what I’ll be putting on my birthday list! AND I’ll be nagging my Stagecoach teacher to be on the list for the next Disney movie flashmob!

Did you know that High School Musical was a “made-for-TV” movie? I wonder if Teen Beach Movie will follow in it’s footsteps? You can watch it on the Disney channel now, and let me know your verdict. I made Mummy record it, so I’ll be watching it again today. And tomorrow…

Family friendly restaurants: why kids are getting a raw deal