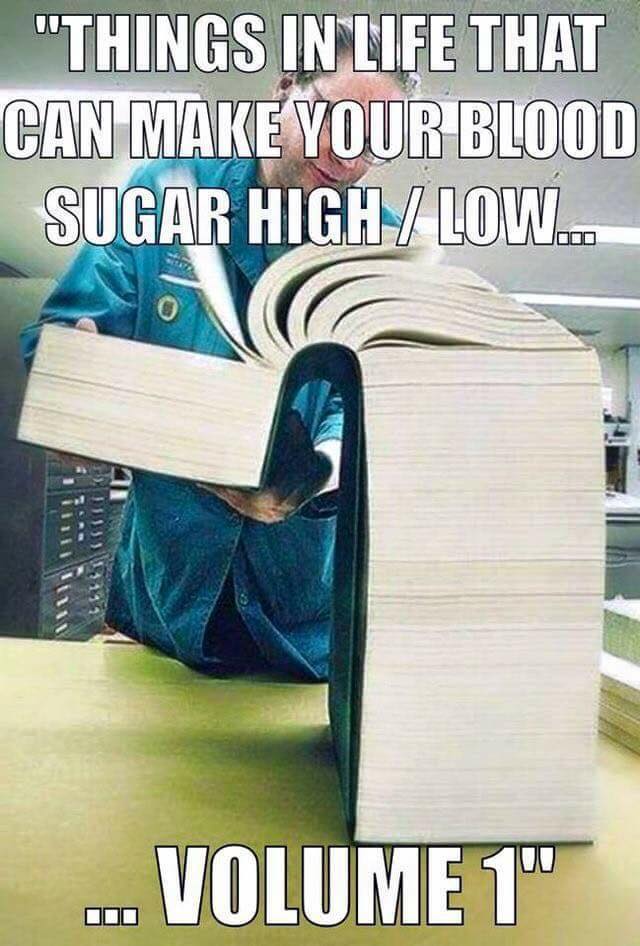 I don’t know who this photo belongs to, but if anyone does, I’ll gladly credit. The man is a genius. If you’re living with diabetes I know you’ll be nodding at this point; if you’re not, please believe us – stable diabetes is not something that ever happens, particularly if you’re type 1.

There is nothing that infuriates a diabetic more than this question. Apart from possibly “Are you allowed to eat that?” See this image for the answer to that question. Then I promise we’ll crack on with the point of this post, but allow me my small pleasure of acerbic wit first? 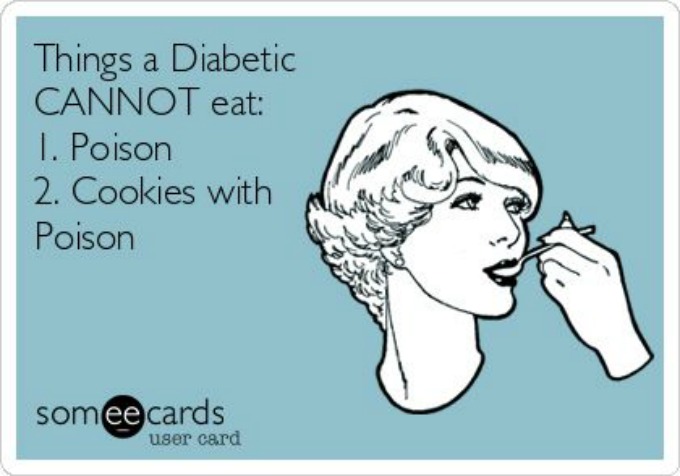 A couple of weeks ago I attended the Diabetes UK Professional Conference (DPC) as one of their live bloggers. We were there to listen to the honestly quite inspiring research and studies being carried out in the field of diabetes, and report back to the wider diabetes community. I have already written about how education plays a vital role in the successful management of diabetes, but one of the other prominent themes struck me as something which the general public might be interested in hearing too.

Diabetes is a very individual condition. Anecdotally I knew this, but the scientists, doctors and researchers at the DPC confirmed it numerous times over the course of the conference. Diabetes has multiple complex causes, affects each person differently, and surprises sufferers daily with unexpected results.

Why there is no such thing as stable diabetes

Take a look at this image:

This picture represents a week of blood sugar readings for my 11 year old daughter. She is considered by her doctors to have excellent control, in the top 5% of her clinic. Anything inside the shaded green area (4.0 – 8.0) is in target. Not normal, but normal enough to minimise the risk of complications. The points below 4.0 are hypos, where she has suffered a low blood sugar and urgently needed to consume sugar. The points over 8.0 are numerous, unexpected, and also make her feel pretty rough. She or I worked really hard to prevent them, but they happened anyway.

So this is what good control looks like. Does it look stable to you?

Stable diabetes: what friends, family and colleagues can do

Stable diabetes: what doctors can do

Over the course of the conference there were sessions about type 1, type 2 (and a heap of other ‘types’ – it really isn’t simple), medications, complications, mental health, eating disorders, children, teens, pregnancy, the elderly, food choices, exercise, ethnicity, and everything you could ever think might have a connection to diabetes. Across almost every session, one message was common:

“We have to provide much more sustained support for self-management.” Simon Heller, consultant, Sheffield.

Individualised care became a recurrent theme. In a session about the psychology of managing a pervasive, chronic condition, most of those with diabetes agreed that they are in control of their numbers no more than 50% of the time; there are just too many variables to chase. The term diabetes burnout came up again and again: “It’s like pushing a boulder up a hill and letting it fall over and over again,” tweeted Charlotte.

This tweet, from Ellie, a young person with type 1 diabetes, had 20 retweets during the conference, and resonated with me. I hadn’t heard the term before, possibly because I’m so compliant it borders on an unhealthy obsession, shows in our results, and is completely unsustainable over the long term:

People with diabetes wake up every morning and wonder what their blood sugar level is. Not what to wear, what the weather is like, what their plans are for the day – how healthy they are. They continue to think about their blood sugar for the entire rest of the day. Everything they do is underlined by the background noise of their blood sugar: vital exams, career-changing presentations, a great night out, sex, an amazing film; they’re all punctuated by thoughts of blood sugar, no-one who is trying to manage their diabetes ever totally switches off and relaxes. Imagine that. Even when they sleep, they don’t switch off. It’s drilled into them that they can’t afford that luxury. Consider the pressure of that burden. How would you cope with it? Could you, without an understanding, supportive medical team?

A lot of diabetes management is about motivation. Patients who are not meeting the recommended NICE guidelines for overall blood sugar control (and only 13% do – that’s how difficult this is) feel terrible about that. They feel even worse when doctors judge them for it. Patients get fed up because it feels like no matter how hard they work, they never win. Take another look at my daughter’s graph. There are 24 out-of-range readings in there. That ‘excellent control’ still gives us 24 moments in a week when we feel like we’re getting it wrong. That’s incredibly demotivating, and it’s no wonder people just give up trying.

Focus on the controllables

A session on exercise drew on sports psychology: patients feel the huge burden of the end result – the HbA1c (the periodic blood test result used to measure diabetes control), when some hurdles along the route are quite simply beyond their control. Exam stress, a nasty cold, an argument with a friend, and all the other reasons in that huge book up there will affect blood glucose levels. We know for a fact that watching Mission Impossible: Rogue Nation, will increase blood sugar from a nice 6, to 17.2 in the course of half an hour. She’s not old enough to fancy Tom Cruise, so I imagine it was all that breath-holding in the water tank. Anyway, you see my point. 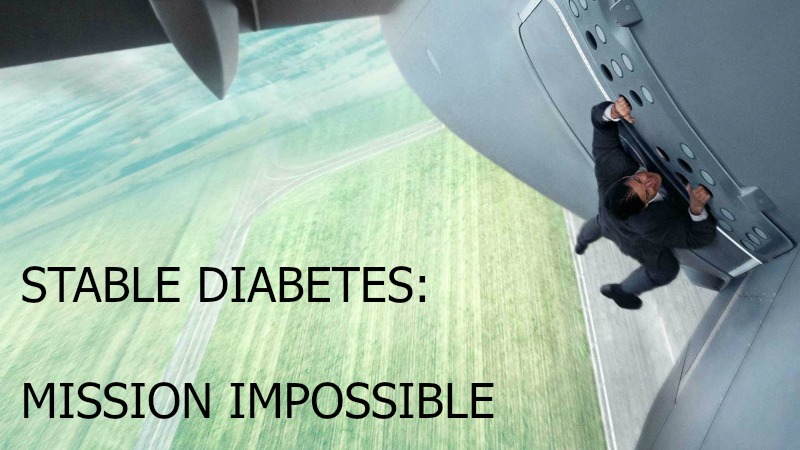 Back to sports psychology: instead of focusing on the end result, the win or the loss, look at what the patient can influence. By focusing on the process, the small things that can be done, the achievements made since last time, doctors put some of the control back in the hands of their patients. The snowball effect of that can mean increased motivation, and ultimately, a better long-term outcome.

Treat each patient as an individual

This slide was part of a presentation about the difficulties teenagers have when they transfer from paediatric to adult care. But it could be reflective of any patients’ feelings about medical appointments when things aren’t going well for them. 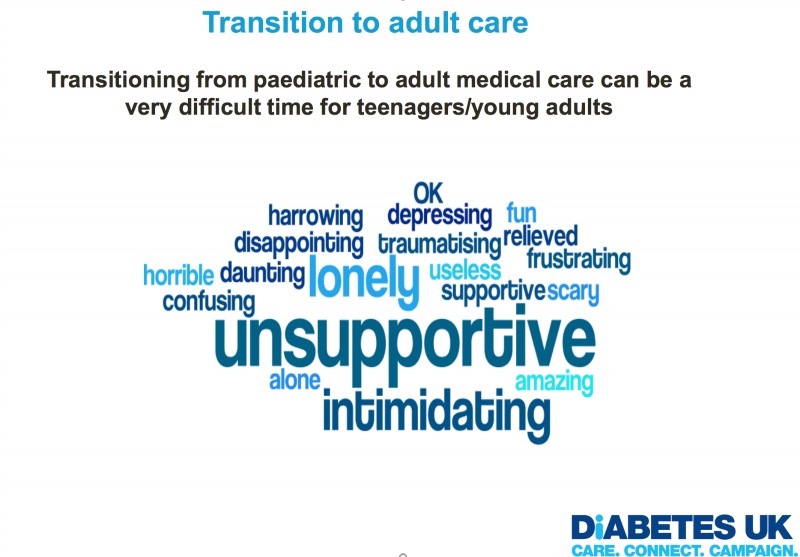 Lots of young people use insulin pumps, some have continuous glucose monitors. Far from being a fix-all, these devices don’t automatically result in better control. They are expensive, however I was astonished to hear from some young patients that rather than support to improve their control, they’ve received threats of what will happen if they don’t:

“You wouldn’t take my pen off me; why would you threaten to take my pump?” declared an emotional young lady as she described one of her clinic appointments.

Mission Impossible: living in the real world, not the clinic

Finally, think about what you’re asking for if you’re looking for ‘stable’ diabetes. For a health care professional, it’s all about the clinical results. Of course it is, your job is to make people well; it must be incredibly frustrating not to be able to do that. However, when a person with diabetes leaves the clinic, they must live a life; a life which contains complicated, incessant medical decisions, but a life which accommodates those, rather than enslave itself to them.

“Stop giving me instructions and start giving me options,”
implored one young person on the podium, and it rang true for everyone.
It might help the condition to do the same exercise, and eat the same meal at the same time every day (though it’s debatable), but that’s not how life works, and if they tried, your patients would very soon be part of a psychiatric clinic, as well as the diabetic. Acknowledge that they have real lives, and that they need your help in learning to manage diabetes within those.  You’re going to have to talk to young people about alcohol and drugs – it’s part of their lives.
And what’s a life without Mission Impossible?

Diabetes: forget sugar and injections, it’s all about education. #DPC16