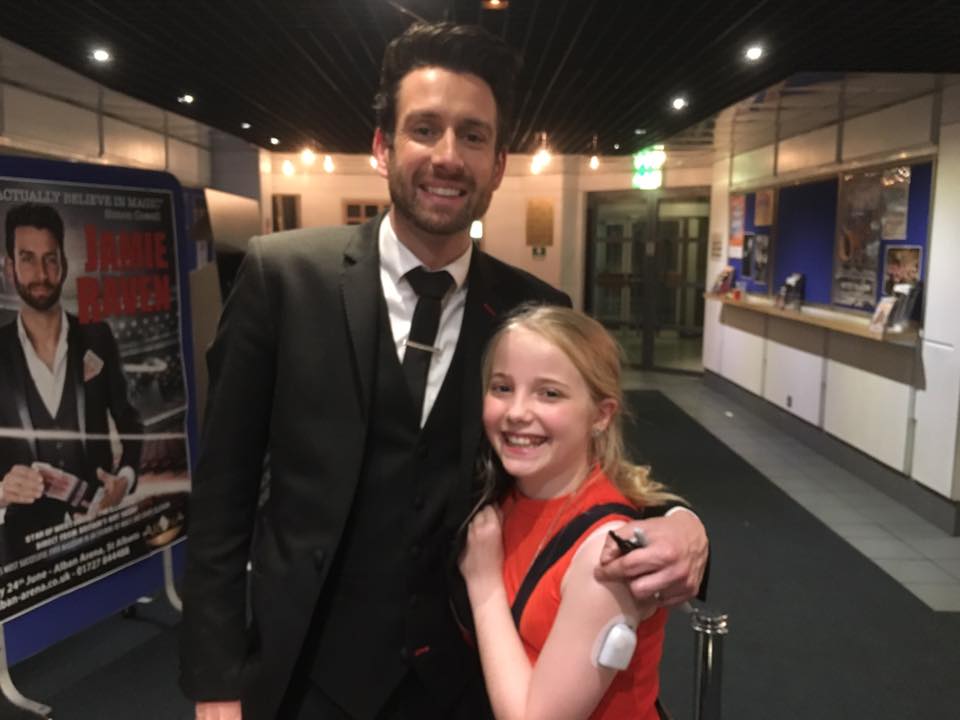 I’ve debated posting this for a good while. I realised recently that my love of a funny story has been buried somewhat in a rather more grumpy tone of voice. Many of you know that Maddie was diagnosed with type 1 diabetes two and a half years ago. I’ve posted a little about how tricky a condition diabetes is to manage, and how frustrating it can be when people make jokes about it. But I feel like for the most part I’ve had my say, people have listened, and now we just have to suck it up and get on with the crappiness of it without boring the pants off the rest of you. It’s time to write funny and heartwarming again.

But every so often, someone with influence gets it so drastically wrong, that it’s just not right to leave it alone. Education must be done, changes made. So it was with Jamie Raven last summer, who shattered my daughter’s illusions with just a few words. I subsequently wrote this letter to him. He didn’t reply. I’m publishing it here to ask a question. Whilst we are for the most part quietly dealing with Maddie’s condition, I do still want to campaign for better understanding and awareness. We wouldn’t joke about cancer, or asthma, so why should we stand for poking fun at diabetes?

A letter to Jamie Raven

This summer, we came to see you as an end of school year treat. My daughter Maddie is a huge fan, and we all watched you on BGT, so we were super excited. I sat next to Maddie, and her eyes were shining the whole way through your show. It was a lovely night, until the end, when you joked about sending a child home with diabetes because he’d had too much Coke. You see, Maddie has diabetes, and it makes her life incredibly difficult. My heart was in my mouth, and I turned to see tears in her eyes. “Mum,” she said. “Can we meet Jamie? I’d really like to explain to him what it means to have diabetes, and ask him nicely not to make that joke again.”

I agreed, and we queued up, waiting until the last person had gone, so as not to embarrass you in front of other fans. I asked Maddie if she wanted me to explain things to you, but she wanted to do it herself. She’s 11, so she was incredibly nervous meeting you, but she wanted to do it anyway. We met, she explained, and you told her you were sorry, that you wouldn’t do it again. She was so proud of herself, and so pleased with your response. She felt like she’d made a difference in raising some awareness about her condition. You were still her hero.

Last night we heard from another diabetes parent that you are still telling the Coke gag. When I told Maddie, she was devastated. She thought she’d made a difference, but you broke your promise to her.

And still she would like to give you the benefit of the doubt. Here is what she told me:

I know that’s lots to think about, so I’d like to give you a few final thoughts and facts to consider:

Some facts about diabetes

Diabetes comes in two main types. Type 1 is an autoimmune condition that often happens to children, but lasts for life. There is no cure, and no one knows how it happens. Type 2 is sometimes, but not always, contributed to by lifestyle factors, including the consumption of calories from sugar and fat, but there is also a genetic element that no one understands as yet. Irrespective of the type, diabetes is often very difficult to control.

People with type 1 diabetes have to inject insulin every single time they eat. Maddie pricks her fingers at least 10 times every day. When she eats, she needs to make a calculation of how much insulin to take based on what her blood sugar is right then, the carbs in what she plans to eat, and how sensitive she is to insulin at that time of day. All that changes frequently. She also has to consider any exercise she might do afterwards, and take account of any stress she has been under prior to the meal. That will dictate the dose of insulin. It changes every time. Frequently, the dose she calculates turns out to be incorrect, but she would never know that until she suffers a high or low blood sugar later on.

If she is ill with a cold, she will sometimes need more insulin, but not always. If she is having a growth spurt she will need a lot more insulin around the clock, but we never know how much until we see the high blood sugars. On these nights she often needs four or five injections of insulin over the course of a night when she’s asleep (it’s true that kids grow overnight!). If she didn’t get them, she could be in hospital by morning. She worries about that before she goes to sleep, despite the fact that I get up every few hours in the night, sometimes for weeks on end, to test her blood and give her the insulin or sugar she needs. This isn’t just her, this is every type 1 child or teenager. Oh, by the way, too much insulin can be fatal, so it’s a constant tightrope walk between staying healthy, and staying alive.

The reason people don’t think diabetes is a big deal, is because – as you can imagine – all this effort becomes exhausting, so sufferers often give up. They keep themselves alive by avoiding a severe low blood sugar. To guarantee this, they run themselves a little higher than is healthy. To everyone on the outside, diabetes is no big deal, because the diabetic isn’t having to spend a large part of his day paying attention to it. But after several years of doing this, his body will suffer. Diabetes costs the NHS £9b in the treatment of complications, and it’s not usually because people are being lazy; it’s because caring properly for diabetes is so exhausting that they just can’t do it for a lifetime. Maddie does it, because she knows that if she doesn’t, blindness, amputations, and kidney failure are pretty much inevitable. That’s a lot for anyone to carry on their shoulders, never mind a child.

Finally, I’d like to make a case for the type 2’s. Their risks are equally serious, and their management is often just as difficult. Yes, some of them contributed to their condition with their lifestyle, but they don’t deserve ridicule, they deserve support. We all know that alcohol is a cancer risk, but most of us still drink. I know for sure that no-one would trivialise it with a joke if I were diagnosed with cancer. Diabetes kills more people than breast cancer and AIDS combined across the world, so as a society we have to start taking it seriously. Maddie and I would really like your help with that.

Thank you Jamie, for taking the time to read this. I hope we have changed your perceptions; I hope that will change how you plan your shows in future. If you can do more, we would be thrilled to work with you.

Maddie is looking forward to hearing what you have to say about everything we have raised with you.

So my question is, what do I do now? My girl has suffered her first heartbreak. She will recover from that, of course; her love affair with Jamie is over, and she currently has a crush on Richard Jones’s magic. But I still need a bigger voice. Do you know anyone who might respond, might be interested in helping to change perceptions, at a more public level than I can currently achieve? If you do, I’d love to hear from you. And what do we do about media celebrities who get it so wrong?

Why girls SHOULD be concerned about their appearance

9 thoughts on “Shattered Illusions and the Sugar Tax”