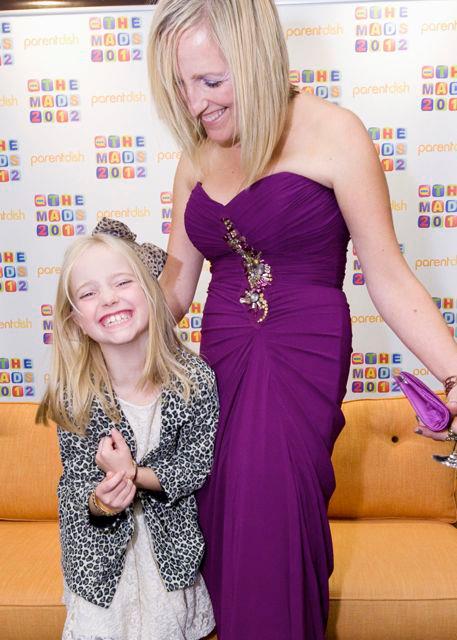 Two years ago we won an award. It was the first award won in this household since my mother took temporary custody of a silver-plated cup, aged 16, for being the best flute player in Cheadle. Or maybe it was in her street. Whatever – it had been a while.

We squealed down the phone on the night we won the Best MAD Schooldays Blog award at the MAD’s. Mother held the phone up to the mic so the whole room could hear our momentary loss of composure. Luckily her best mate from blogging ‘day zero’ also scooped a trophy, or that could have been a tricky welcoming party!

She won’t store the fragile glass disc anywhere other than the kitchen window ledge, where it dices with death by dirty dishes on a daily basis. We’ve told her it’s silly, but she claims that – aside from her laptop – the kitchen sink is where she spends most of her time. I beg to differ; it is Actually Daddy who does most of our dishes!

Last year we chucked out a nonchalant “Hey, we don’t mind, but if you fancy lobbing us a vote that would be nice,” kind of post, and didn’t win. Which made Mummy shed her ballgown and ride a bucking bronco in a leopard print onesie. And write this. Now it’s time for the MAD Blog Awards 2014 nominations. 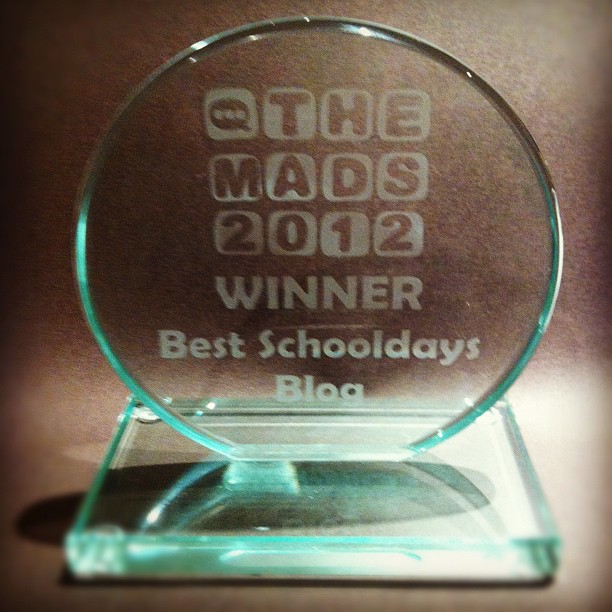 It is hard to ask for votes, especially when you already have an award, and there are sooooo many other blogs who deserve it just as much. Are we being annoying? Are we just plain greedy? Should we really care so much?

But the thing is we do care. We love our blog. And I really can say ‘our’ these days, since I’ve been stealing some of the white space from my mother to say what I actually think, rather than what she thinks I’m thinking. If that makes sense?

But we care about the whole bloggy thing too. The blogs which inspired us to get started; the blogs which make us laugh every day; the bloggers who make us type “THAT!” when we read something which strikes a chord; and the new blogs which pitch up nearly every day inspiring us to keep getting better.

So we would like your vote in the MAD Blog Awards 2014. We would love to be back in the Schooldays category, and we think we qualify for Family Fun -although you would not say that if you saw us at 8.30 am on  a school day 😉

But we’d also like you to take a look at some of our favourite bloggers, to see if they might just be someone you’d consider voting for as well. Blogs like Just a Normal Mummy, which makes Mummy lie down on the floor and roll around gasping for  breath; blogs like The Crazy Kitchen which inspire our weekly menus; blogs she wishes had been around when she was pregnant, like Mums the Word; and Mummy Never Sleeps, who seems to make her cry. Then there are the people who have inspired us to get better at taking lovely photos this year, like Annie, who has gone from ok to awesome in just a few months; A Bavarian Sojourn, whose posts have fuelled the next 10 years of our family travel plans; Science Sparks, who forces Mummy’s hand every now and then to let us do cool experiments; and lovely all round lifestyle blogs like Grenglish, who knows how to weave a story that has you wishing you lived at her house.

There are more, they are endless, the amount of beautiful, creative, inspiring, or just downright useful pieces of writing on the internet is astounding. So many we haven’t even figured out yet who to vote for ourselves! If you don’t read blogs, I would urge you to click on any of the links above to see if you might like to going forward. Then do, please click the badge below to go and nominate, or follow this link to the MAD Blog Awards 2014 page. We would be so happy to have your vote, and happier still if you like some of our suggestions enough to vote for them too.

We would love to have that little glass disc back on our shelf – and not just as a washing-up insurance policy! And you know what’s even better? There’s no need for a can of Brasso!

Ask GG: 7 reasons why I will move to another country if Gove gets his way