The new Maxi Micro Scooter with Joystick: review – 2 in 1 version

Disclosure: we were given a Maxi Micro scooter with joystick for review purposes. 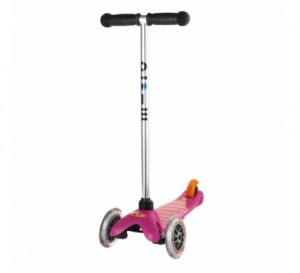 I’ve wanted a Micro Scooter ever since I first saw the Mini Micro on a nursery run 6 years ago. Of course, I had yet to master my tricycle, and any attempt by M&D to remove the parent steering bar was met with shrieks of outrage and howls of hatred for the bright orange plastic 3-wheeler. Threats to throw my trike in a skip, or gift it to another little girl fell on deaf ears. I never did master my first wheels, but how I craved a bright pink Mini Micro scooter.

I got my wish and repeated my trike antics for a few days whenever I was confronted with a hill. Kerbs were a challenge. But once I had the “tilt-to-steer” procedure under my belt I was off. I flew off kerbs with ease, and main roads saw white-faced parents hurtling down the hill wearing  a strange expression that was half pride, half sheer terror. It was time to invest in a safety helmet…

I spent 3 very happy years scooting everywhere, as my brother made an appearance and took over the buggy. And around the same time he began to require a scooter, I graduated to the Maxi Micro – purple, because it was the latest colour.

The Bug is now coming up for 6, and his Mini-Micro, well, it’s a bit small now. We were nervous about his transition to the larger Maxi Micro, but we needn’t have worried. As for me, at almost 9 I’m ready for a new challenge, so I chose the Maxi Micro 2 in 1 with the Joystick option. Check me out:

The Joystick on the Maxi Micro scooter adds a new challenge, and to be honest it took me a while to master it, but it is fun, and eventually you can learn some cool tricks that aren’t as easy with the handlebars. Personally I wouldn’t say it’s worth it if all you’re looking for is a way to scoot, as you’ll use the handlebars much more often. As you can see, it’s really easy to change the T-bar post for the more challenging joystick, although not so easy as to make it unstable. It’s rather more difficult to get handcuffs off the bars, but hey, maybe you’re not as daft as us!

A while ago we attended a Christmas in July event that told us that Micro Scooters accessories would be the next big thing for Christmas. It was a good prediction and I put these jewel stick-ons on my list. Santa never got the message, but I’m still on the lookout for some bling for my wheels! 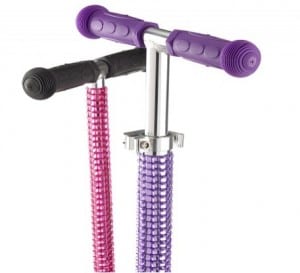 It’s been an awful week weather-wise, probably because Mummy jinxed things by buying a soft-top car that will never be used, but we were still proud of our ability to get outside. It may not be the country, but it was a quiet road, it was windy, and  we were outdoors with smiles on our faces! So we’ve linked up to Country Kids over at Coombe Mill.

5 thoughts on “The new Maxi Micro Scooter with Joystick: review – 2 in 1 version”