Help with reading from the Ministry of Letters

Do you have children who are soon to start school? Are you keen to get them acquainted with letters, ready for the big scary world of phonics and literacy lessons in school? Well don’t be. We have talked long and hard on Actually Mummy about how children learn to read, and there are lots of things you can do to help. But it will come, when your child is ready to read. In the meantime, if you are still keen to press on, you might like to try the Ministry of Letters – Operation Alphabet.

Now the Bug is full-throttle in his reading endeavour in Reception at school. He’s doing well, but his books are entitled “Pam Naps” or if he’s being challenged, “Meg and the Bun.” Operation Alphabet is different. For a start, it is not a reader. It requires adult participation, in that it is an adventure story!

Charlie Foxtrot has just started school, and is finding his alphabet confusing. I don’t blame him – it’s like some kind of code to a newbie! But agents from the top secret Ministry of Letters spot his travails and summon the Special Alphabet Service to help him. With Colonel A at the helm, the letters embark on a thrilling, Bond-esque style mission to help Charlie learn his letters, and open up a magical love of reading from which he will never step down.

Not your average phonics book – in fact, not a phonics book at all, but a book which makes letters funny, adventurous and accessible to toddlers and pre-schoolers, Operation Alphabet is cool enough to entertain me – a speed-reader – and the Bug alike. With seriously cool illustrations it is the alphabet version of Numberjacks, but without the corny.

What’s more, as well as the brilliant story and picture book, the Ministry of Letters have made an iPhone App called the Singing Alphabet – is there anything these letters can’t do??? The Bug is obsessed with Mummy’s iPhone (he plays it with headphones during my piano and tap classes). No doubt he will be offering his pocket money to purchase this one, such is his love of the quirky little letter guys!

So if you’re especially keen to foster a love of letters and reading in your little ones before September school begins, here’s where to start! 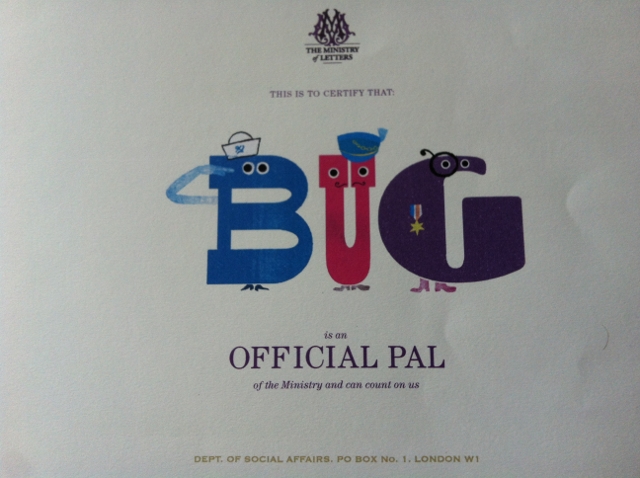 We were sent a copy of Operation Alphabet to review. All opinions are our own, and no payment was received for this post.