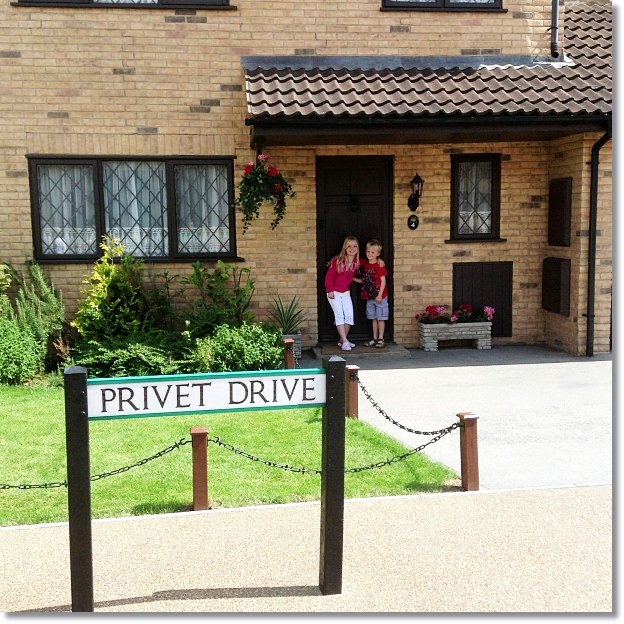 I am not well-known for wanting to go out. I may have mentioned before that leaving the house is a process which requires expert “people management” skills on behalf of my parents. It begins with a bright and cheerful “Today we’re going to….” followed by some strategic groaning and face-making by yours truly. So I astonished even myself when I was up and dressed before the old’s alarm went off, on the day we had scheduled to visit the Harry Potter Studio Tour in London. 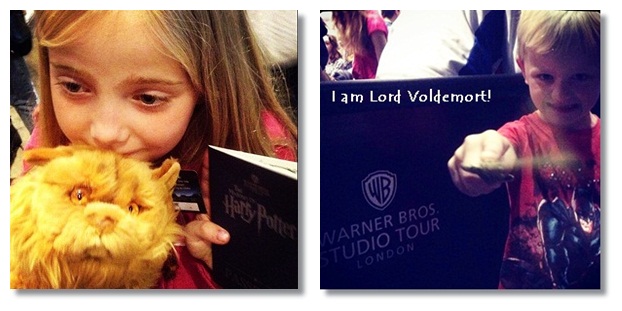 When you book tickets you have to choose a time-slot, and we were a tad early for ours. All to the good, because the gift shop is right by the entrance – well it was my birthday… Transformed into Hermione and Lord Voldemort ( what? I have Harry’s wand already from a previous trip to Universal Studios in Orlando, so I needed to compare powers!) and armed with our passports, we got into the queue.

Now I have queued for the Harry Potter experience in Florida, and I can tell you, it’s looooooong! Not so the London studio tour, where the pre-booked slots meant we only had to wait about 10 minutes before our turn came. Add to that a highly amusing door manager who allowed me to cast a spell, and sang happy birthday to me, and the wait was totally tolerable for 6 year old. 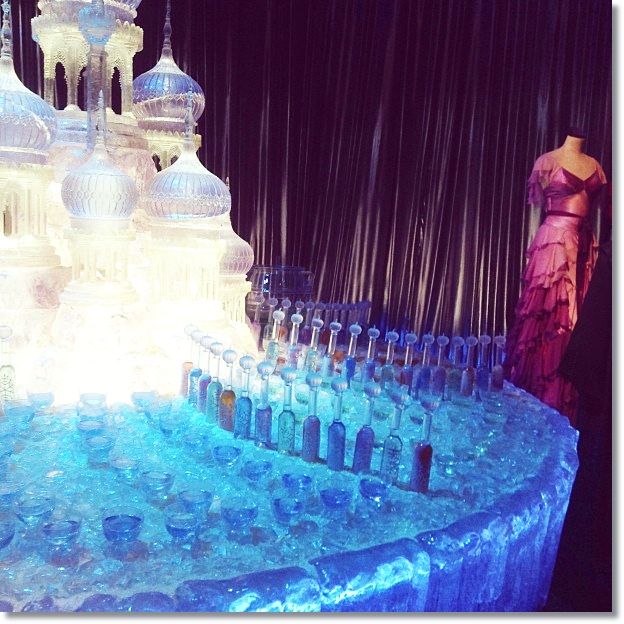 The Great Hall was fascinating, especially finding out how the magic ceiling works, but it was what lay beyond that captured our imaginations the most. We were told as much detail as we wanted to hear about how the costumes and make-up effects were achieved – did you know that Daniel Radcliffe was allergic to his glasses? Or that Hermione’s buck teeth (as described in the books) were abandoned because no-one could hear what she was saying when she was wearing them?

But it was the Yule Ball ice sculptures, and Hermione’s actual dress that stopped my sister in her tracks. I looked her in the eye, and plainly saw ball gowns, stretch limos and 16 year old girls flitting through her mind as she contemplated her school prom. 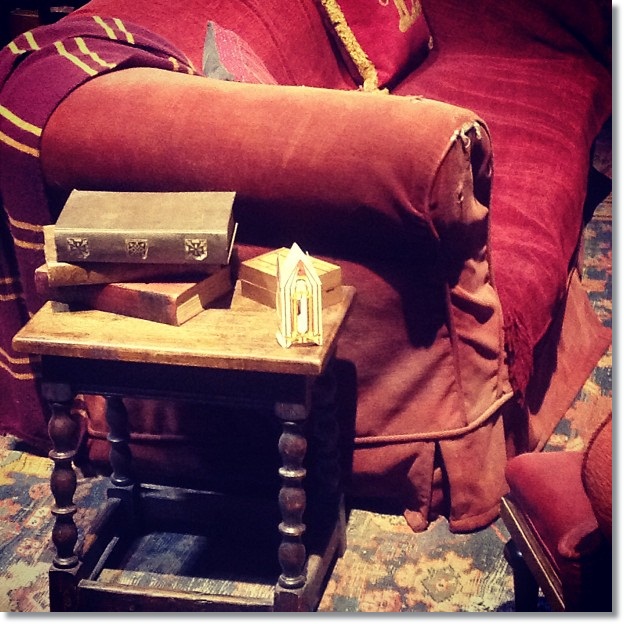 We were tickled to spot a packet of Bertie Botts every flavour beans in the common room – and yes, I can attest to the fact that the vomit flavoured beans taste of vomit, and that the bogey flavoured beans are the best – for a boy… 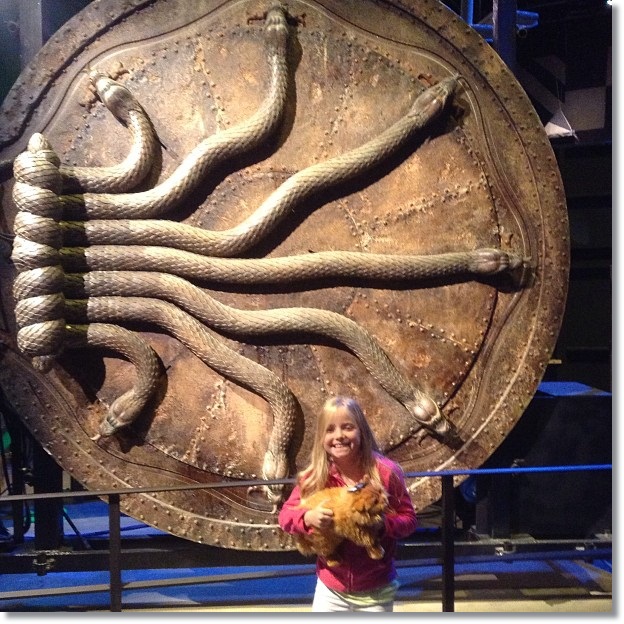 And we marvelled over the detail on the snake door – yes, the original door used in The Chamber of Secrets – and it’s mechanics. We’ve always assumed that computer generation created that door, but no, each of these snakes is a working part! We flew broomsticks in the green room, bought the photos, and pressed buttons to make Mrs Weasley’s knitting knit by itself, before we were out into the fresh air – reluctantly – to sample the butterbeer. We have searched the internet endlessly to find a recipe for butterbeer, such is the charm of this creamy fizz, but no, to get this delight you must visit the Harry Potter studio tour… 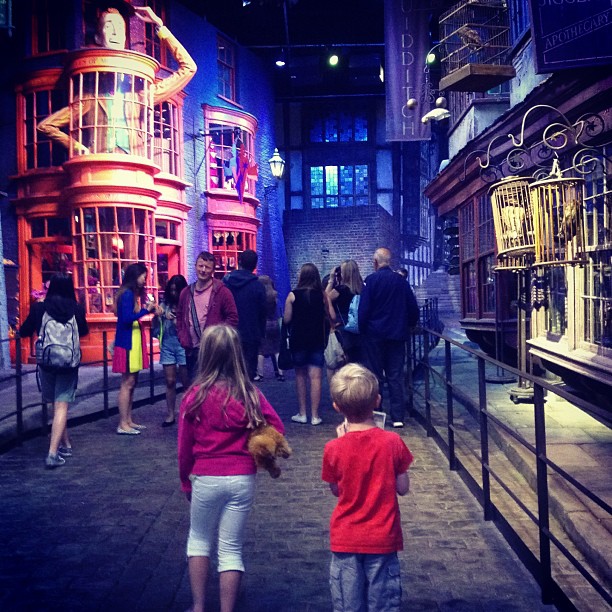 Next we hit Diagon Alley. My Mum thought this was just the coolest thing ever, and as we were lucky enough to be visiting during #summerspells we got to see how they actually film the magic in the wands. (I’m not telling you, you’ll have to go and find out yourselves)!

We stayed far longer than the advised 3 hours, because there was quite simply no way I was leaving – wild Skylanders couldn’t have dragged me home to the Wii that day! And when I saw the giant model of Hogwarts it took me a while to confess to my Mum that I had a lump in my throat…

Seriously, if you haven’t visited, do so soon. I know it’s naughty of me, but if you’re visiting Orlando any time soon, and wondering which Harry Potter studio tour to do, take it from me, save a day in Florida and go to London instead – you won’t regret it!

* Disclosure: because it was my birthday we were gifted my Voldemort wand and my sister’s Crookshanks, but we paid for our own tickets, and will do so again – great value for money.

Geocaching – a treasure hunt for families with a difference

What Age is Skulduggery Pleasant for? Children’s Book Review