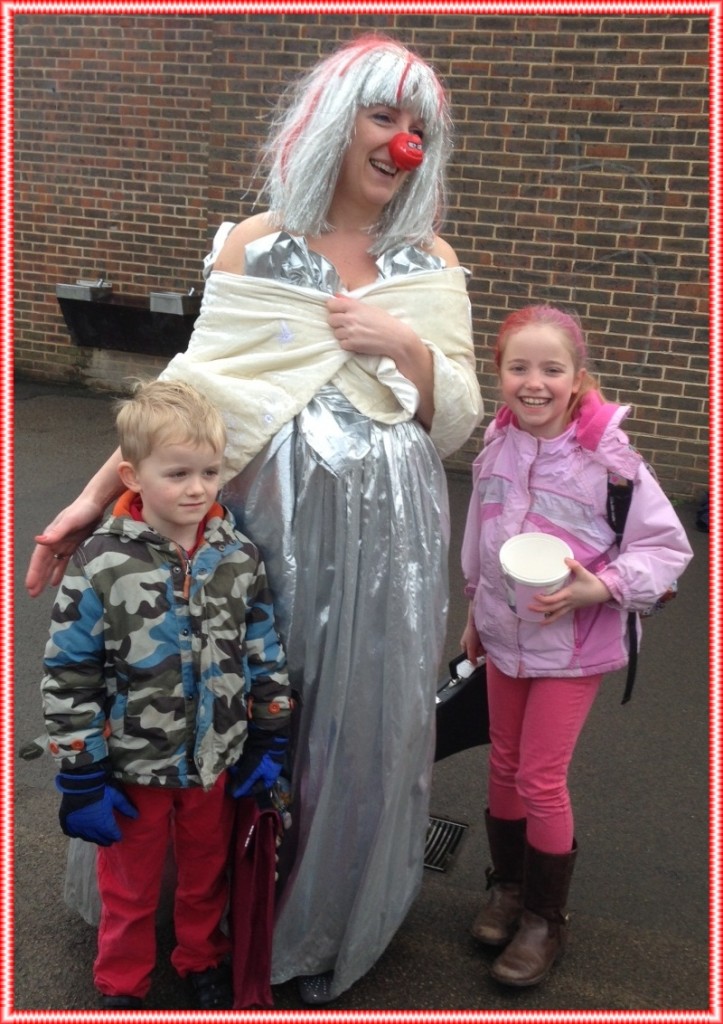 I went all out to embarrass my mum today. Egged on by the lovely Mummy Alarm, she decided to give this dress one more outing by joining #TeamHonk’s Red Nose Day Team for Comic Relief. Originally she asked 100 people to donate £1 each. On reaching her target, she promised to wear the silver ball gown she last wore aged 21, to her Eighties themed rehearsal at Rock Choir. Which she did:

But not content with that, Mummy raised the bar, by promising to wear the dress again, on Red Nose Day, on the school-run! #nutter… She wanted £200 before she would brave it. At £163 she made a huge mistake by telling Facebook she was only £37 short.

Within 5 minutes she had a donation for £37 from Mediocre Mum, and had reached her target. Thanks for that Chrissie 😉

So today I set my alarm for 7am:

Forty minutes later she emerged from the bathroom, silver wig, and blue mascara attempting a futile disguise, and I marched her up to school. Well! You have never seen so much horror on the faces of adults and children alike.

“I know, I look ridiculous,” she muttered to the Dad at the head of the playground queue.

“No, not at all,” he reassured her. “It’s just that I’ve never seen you without your glasses. Or with that much cleavage…”


One or two of the children dared to come a bit closer, but none of them could bring themselves to speak. Parents turned their backs and sniggered. I can’t say I blame them, had she not been holding my violin and water bottle I would have stayed well away too 😉

She fared better on the walk home, as parents of toddlers approached and congratulated her on her bravery. Their children were only 3, after all, they still think a huge frock and silver hair is probably a fairy godmother! Mummy was further cheered by this donation waiting on her sponsorship page when she got home:

She went straight into a live Google Hangout to interview Annie, who is having all her hair cut off tomorrow. She didn’t have time to change. She looked completely ridiculous.

There is still time to donate by clicking on the link. Even 50p can buy a vaccine that will save a child’s life. We are proud to be part of the TeamHonk effort for Comic Relief, and we will be watching out for them in the audience tonight on TV. Three amazing women went to Ghana to see just what Comic Relief can achieve. They followed this trip up with visits to domestic abuse centres, and other Comic Relief initiatives in the UK. They did huge cycle rides, climbed Snowdon, and fed their children for £12 for a week.

Tonight Annie, Tanya, Penny and Gemma will be in the audience for Comic Relief live at the BBC. They promise to be loud and lairy on behalf of the awesome #TeamHonk bloggers. And who can blame them!