Our school stages a non-uniform “come as your favourite book character” day every year on World Book Day. In 2013 World Book Day will be on Thursday 7 March, and the Bug has been pondering his costume for a while. Would he wear my cast-off from a previous year? 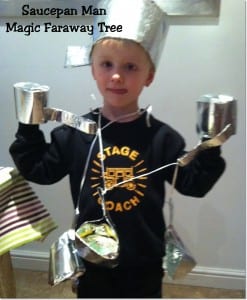 His answer was no, on the basis that not only has he never read the Faraway Tree (I know, right?!!), but that the saucepans have not fared too well for their 2 year secondment to the loft…

So we were stuck, wondering what the best character would be. We don’t have a dinosaur in underpants, we gave away our Thomas outfit when it got labelled babyish, and it’s just not practical to go to school sporting a heavy-breather helmet and a light-saber. So with no other options available, and running out of time to get handy with a needle and thread, we embarked on an internet shopping spree.

Delights have a massive choice of potential costumes for world book day, all laid out in easy-to-search categories, from History to Disney, via Superhero and beyond. Beyond was the Bug’s choice, Star Wars being his current obsession. We tried to steer him towards Luke, confident that a Skywalker would still be able to do his sums without the distraction of a helmet. But the Bug wanted to be different; who knew Commander Cody was such an integral character…? 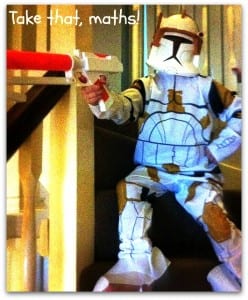 Last year, as well as the school costume day, we created an edible book! If you are creative with cakes (or indeed some other kind of food, there were amazing creations) you might like to enter the Edible book festival competition over on Playing by the Book. Here are our entries, which got lovely comments, but sadly didn’t win, and there are some ingenious ideas on the edible book pinterest board. 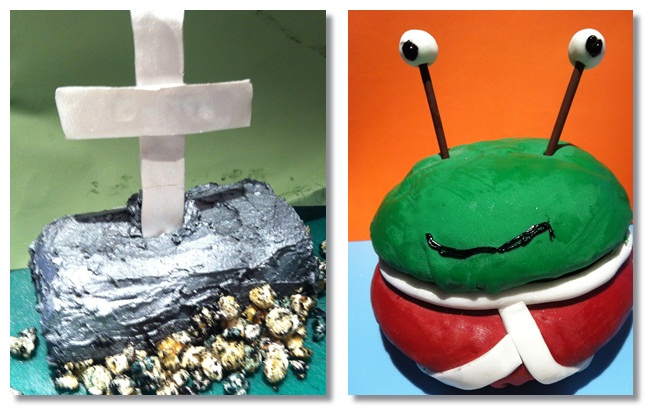 If you have the time and enjoy crafting, you will find lots of suggestions online for making your own costumes. By far the simplest we’ve found is this tutorial in how to make your own superhero mask, and the blogger, Red Ted Art gives details of a live crafting session on Google+ if you’re handy with social media or want to see a real crafter in action.

Finally, we love ex-teacher Rebecca’s idea of making up stories about what would happen if our favourite book characters met in real life.

“Commander Cody would start shooting Saucepan Man with his Clone Trooper Blaster. He’d soon stop though, when he realised the bullets just bounced off the saucepans and came right back at him!”

Right then, we’re all sorted. What are you going as?

For more ideas on costumes for World Book Day check out these blog posts:

We were given our Commander Cody outfit for the purposes of review.

6 thoughts on “Costumes and ideas for World Book Day”