What’s all the Fuss about 13 Reasons Why?

Everyone is talking about 13 Reasons Why. Have you seen it? Have you deliberately avoided it, not wanting to go to that place where your child is 17 and no longer tells you anything? Has your 12 year old seen it? Did you ban her from watching it?

What’s all the Fuss about 13 Reasons Why?

13 Reasons Why – the take-home message for parents

If you don’t know what I’m talking about here, chances are you don’t have a child somewhere between the ages of 11 and 18. 13 Reasons is the Netflix drama about a girl who commits suicide, and the 13 tapes she records to explain to her school friends why she did it. It’s not pretty. These friends all played a part – in her view – in her decision to end her life.

As parents we worry about the things which ruined our own friends lives when we were young. Failing exams, alcohol, that girl who got pregnant at 14. We worry about the things we don’t understand, because we never went through it: social media bullying, sexting, drugs (well okay, that may just be me – I’m so old I was never even offered drugs as a teenager. Although I was once asked if I had any, as my eyes glazed over with boredom at 3am in the Ministry of Sound). I wrote recently that statistics for teenage pregnancy, alcohol and drug-taking are at an all-time low, so we’re all good, right?

Well, not as much as you’d think. What makes 13 Reasons such uncomfortable viewing for parents is that the events leading to her decision are things you could totally imagine forming part of your child’s experiences as she goes through her teenage years. Yes, there is rape. But there is also a lot of the mundane crappiness that happens – probably in the vast majority of secondary schools – that we all hope our kids will be able to weather. And it’s not just Hannah who has a bad time of it in school. All of her friends are struggling at various points. Boyfriend issues, problems at home, friendship betrayals, some drug-taking and sexual experimentation that doesn’t end well, and self-confidence crises. All things we might hope will never blot the landscape of our kids through their teenage years, but that in reality probably will.

Should you let your child watch 13 Reasons Why?

My 12 year old daughter was the first person to tell me about 13 Reasons. People at school were watching it, and she was interested. I talked to other mums about it and the general feeling was that whilst suicide is a difficult subject, it might be better to support conversations with our young teens about it whilst they were interested, and could seek guidance from their parents. So I was minded to allow it. Then I heard about the rape scene. I mentioned it to my daughter, and told her that I thought she was probably too young to be able to put that into context and cope with her feelings over it. So she shouldn’t watch it. It was too late. She was already on episode 10.

In that instant I had confirmed to me what I think I already realised: our kids know a lot more than we think they do; they’ve seen more than we want them to see already; and we have no control over the conversations they’re having with their peers. Kids are experts at avoiding telling their parents the things they think we don’t want to hear. They’re also very clever about getting what they want, if they feel the need. You can ban it, but if your child wants to do it enough, he will find a way. The overwhelming dread I got from watching the series was just how much those teenagers were able to hide from their parents, and quite how little they confided in them.

Why we should be more open about teenage suicide

It’s normal for teenagers to shut their parents out. It’s normal for parents to worry. And in reality, the vast majority of our kids are going to make it through okay. They are going to take some knocks, and that will have an effect on their personality, and their choices through life, but that’s how it should be. None of us are born the person we end up being. It’s a process. But even one death is one too many, and by refusing to talk about it, we’re telling our kids they’ve got to handle their problems on their own.

We tend not to worry about the unthinkable. Suicide seems so extreme, it could never happen to our own kids. And yet teenage suicide is on the increase. It’s the biggest killer of young people under the age of 35 in the UK. On average, four young people end their own lives every day.* It’s actually happening, so it absolutely has to be a topic for discussion with our kids, right up there with avoiding pregnancy, STD’s, bullying and drugs. And we need to have these conversations when our kids want to talk about it – not when we think they’re ready. Or we may be too late.

If you are considering suicide please read Jenny’s blog post on the subject. There are lots of thoughts there, and some resources that may help. I also like this post 13 Reasons Why Not.

*Statistics taken from the OLLIE Foundation. 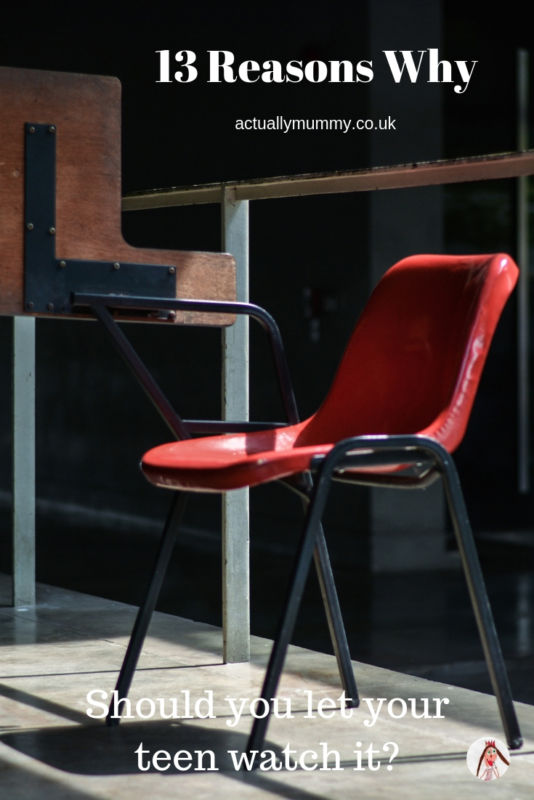