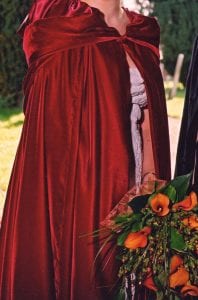 Mummy bought a colour today. She is now the proud owner of Blazing Autumn, courtesy of Own a colour , an initiative supporting children’s charity Unicef.

I helped her pick it out. I begged for Flamingo Pink, Party Pink, or even Sugar Plum, but she was having none of it. Mummy wanted Blazing Autumn. This picture is the reason why.

M&D’s wedding took place in November, not because it was the only date left and they couldn’t wait, but because this cloak had been on her mind since she was a little girl. The church and its Boston Ivy would also be swathed in red by November. Mulled wine was the drink of choice at the reception venue, selected for it’s wooden staircases and roaring fires.

There was no panic about the weather for Mummy; she had umbrellas and ushers at the ready just in case. In the event a crisp frosty morning gave way to bright sunshine and Mummy smugly thanked fate for smiling on them. 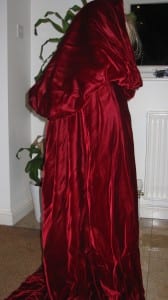 Mummy's Colour and Mine!

I begged Mummy for a try of the wedding dress, but she said the same as she said at her wedding. It wasn’t about the dress. It was all about the Autumn Red cloak. So I tried that on instead 😉 I think I rock it pretty well, don’t you? I’ve asked Mummy to save it for me to borrow when I get married. Mummy is thrilled, but she says she won’t hold me to it!

If you would like to own a colour check out the website. In return for a donation to Unicef you can name your own!

You can also see the other colours people love over at Sticky Fingers Photo Gallery.