We put our Christmas tree up yesterday. The iPod oozed twinkly tunes, the cinnamon sticks got a spray of festive scent, and we spent a happy afternoon rediscovering Santa books and stockings, last year’s home-made cards, and the Silent Night snow-globe. Then came the magical words all children long to hear: 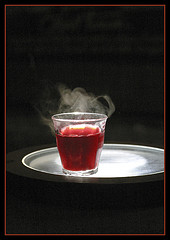 Fancy a glass of mulled wine…?

Christmas is here, which means Mummy would normally drink quite a lot of wine. It’s ok, we don’t mind, it’s even quite cool, because she gets happy, and happy is always good. She gets the guilts too, about our plastic cups of water, and so me and the Bug invariably get Ribena in a chunky glass; I even convinced her to put J2O Glitterberry juice on the shopping list yesterday, so we can pretend to drink mulled wine too...

Alcohol is ok, really isn’t it? I mean, I know it’s not for children, and I don’t really care; I’ve tasted champagne (or popping wine, as the Bug calls it) and I didn’t really like it. So where’s the harm if Mummy likes a glass with dinner? What’s the problem if she occasionally drinks too much and gets a bit silly?

Last Christmas Mummy had a debate with Grandma over who put me and the Bug to bed on Boxing day. Mummy was adamant she hadn’t been in charge; Grandma was firm that she had. Guess which one of them was right? 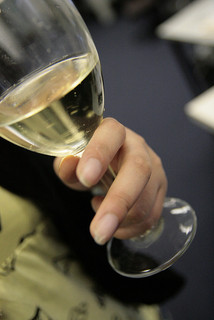 In Blogland, wine gets talked about on a daily basis. Mummy has learned not to venture onto Twitter if she is having an alcohol-free night. She can guarantee that five minutes in, someone will be ‘chinking’ a glass or insisting on a G&T. Google hangouts are worse: the first glimpse of someone else’s glass on screen sees her muting her mic and popping a cork. And don’t get me started on the mum-coined phrase that is wine-o-clock!

This Christmas, Mummy wants things to be different, and that begins with being honest with us about what alcohol can do to her. Wine is a fact of life in our house, rather than a special occasion treat. The Bug and I are 5 and 8 respectively, so the desire and opportunity to drink alcohol never arises, but we are growing up, getting cheekier, and joining in with grown-ups on our own terms. Mummy is concerned to ensure that we know the facts, before we ever have a decision to make. That process begins with her changing her own habits, and she has made her own set of rules:

As regards talking to us, Mummy has been a bit stuck to know what to say about alcohol. Kids learn by copying the adults in their lives from a very young age. Grandma and Grandad didn’t drink often when Mummy was growing up, but when there was wine at the table, Mummy was allowed half a glass – mixed with lemonade, because she didn’t like the taste! Grandad’s premise was that if she grew up drinking occasional small quantities of alcohol, she would never go crazy with it once she hit the legal drinking age. It didn’t work…

In 2011 Drinkaware launched it’s Kids and Alcohol campaign, aimed at providing parents with the facts and the skills required to talk to children and educate them about drinking alcohol. This Tuesday December 4th sees @drinkaware and @tots100 host a Twitter chat about the best ways of dealing with alcohol around kids. Come along between 8pm – 9pm and follow the hashtag #kidsandalcohol. You’ll be able to get some advice from the experts on talking to youngsters and modelling safe alcohol consumption, as well as tips on dealing with young adults who are just starting to experiment with drinking.

How do you handle the issue of alcohol around your kids? Is squash in a wine glass ok for a special occasion, or will it habitualise the concept of wine-drinking for children? Is it ever ok for your child to see you consume too much, or should all alcohol be banned until the kids are in bed? Is there a right age for children to have their first taste of wine or beer, or should it remain off-limits until they are 18? I’d love to know your thoughts, and if you can, come and join the chat tomorrow on Twitter #kidsandalcohol. Or pop over to the Drinkaware website for advice and information.